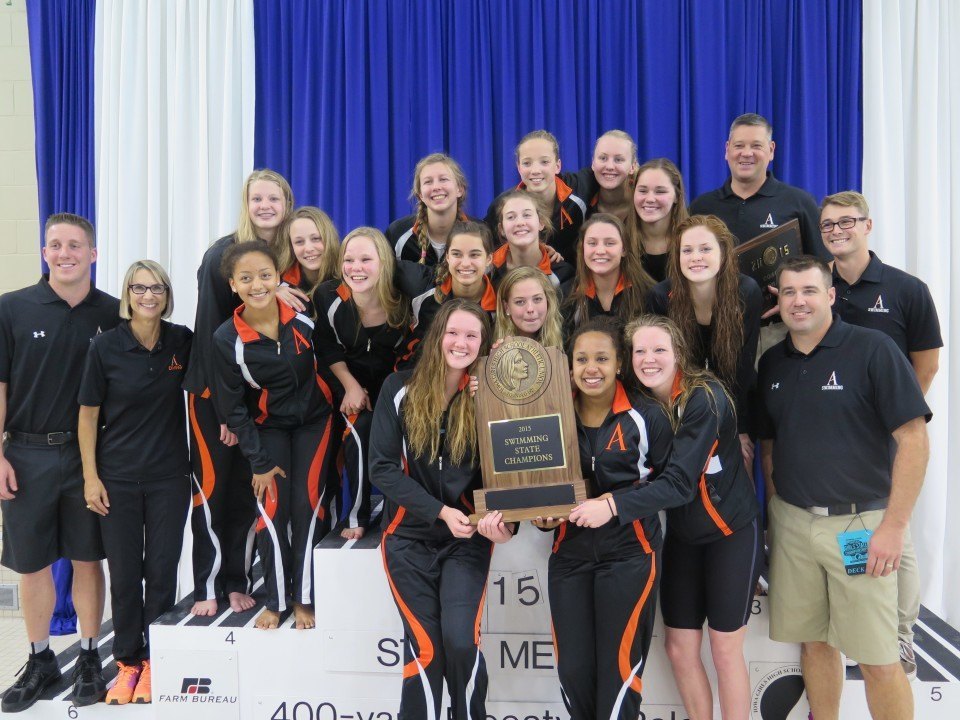 The girls of Ames High School capped an undefeated season and won the Iowa Girls High School Athletic Union state title over the weekend, getting a dominant finish from sophomore closer Sophie Sorenson.

Sorenson did her best Mariano Rivera impression, coming in late to shut down the competition and winning 3 of the final 4 events in a row.

Right in the middle of that run was the night’s only individual state record, which Sorenson broke in the 100 backstroke. Her 54.61 snuck under the 54.83 set last year by Maddie Gehrke, who is now swimming Division I with the Mizzou Tigers.

Ames went 1-2 in that race with fellow sophomore Jazlyn Horras second in 56.82.

One event earlier was the 200 free, when Ames first made the proverbial call to the bullpen to get Sorenson into action. She led off that relay in 23.36 (the fastest split in the field even without a relay start), staking her team to a lead it would never give up. Sarah Bell, Olivia Jenks and Amy Feddersen closed out the event in 1:35.57 as Ames topped the field by 1.7 seconds.

And after a brief break during the 100 breast, Sorenson returned to pitch the final out, anchoring the winning Ames 400 free relay. Her 51.40 split was the best of her relay, and held off charging Southeast Polk senior Allyssa Fluit (50.07) to help Ames win and break the state record in 3:29.15.

Ames won all three relays on the night, opening things up with a 1:45.65 win in the 200 medley. Horras, Molly Winer, Snyder and Feddersen were just a tenth off the state record in that relay as well, with Ames knocking on the door of the three fastest relays in Iowa high school history.

Southeast Polk’s Fluit had a strong senior campaign, winning two events individually. She went 1:47.53 to win the 200 free, just missing her own state record from a year ago. And later in the night, she defended her own 500 free title, going 4:54.78 to blow out the field by almost 8 seconds. Fluit will stay in-state next year, representing the Iowa Hawkeyes in the Big Ten and NCAA.

The swimmer who denied Sorenson a fourth title was Muscatine junior Sarah Schemmel, who won two events herself. Schemmel topped Sorenson in a thrilling 50 free 23.24 to 23.32. Schemmel would go on to take the 100 free in 50.51, just a tenth off the state record, and dethroning defending champ and state record-holder MyKenzie Leehy of Lewis Central.

Other event winners were Newton senior Samantha Hedrick in the 100 fly (55.01 and just a half-second off an 8-year-old state record) and Pleasant Valley junior Claire Park in 1-meter diving (517.95).

Photo credit should be to Chris Pose, with many thanks to him from the AHS team.