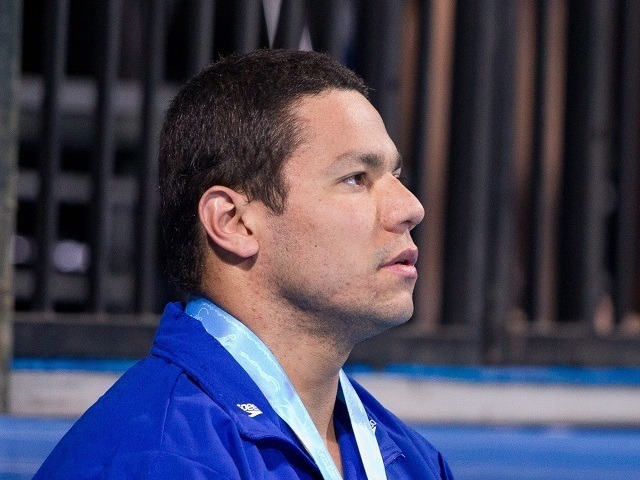 Felipe Silva didn't get his desired World, or even National, Records at Maria Lenk, but at least he came away with a textile best. (Photo Courtesy: ©Tim Binning/TheSwimPictures.com

Big thanks to Brazilian correspondent D’Artagnan Dias for contribution to this report.

As the weather continued to deteriorate in Rio on Friday into what is expected to be a cool, rain-filled weekend, the times overall reflected that as it was a slow session (especially as juxtaposed to the record-breaking night we saw on Thursday). That is not-withstanding another 50 meter, textile-best at this meet (though again, that had some help from a tail wind).

This 100 free had a lot of buildup, especially after Cesar Cielo was so good in the 50. Ultimately though, the weather seemed to be too much. Of course, in last night’s 400 free relay, the competitors fizzled a bit, so maybe the sprinters were just getting worn out by this point of the meet. Cielo won in 48.28. That ranks 6th in the world this year, but unlike the shorter sprint he was quite a bit slower than his 2011 best.

He was out in 23.0 and came back in 25.2 – comparing that to his splits in December that was without any rest (he came home in 24.7), that’s a big step backwards in his quest to come close to James Magnussen’s closing speed.

Marcelo Chierighini was 2nd in 49.05. He was very good in the prelims in 48.79, but he too was hit hard by the poor conditions at the Maria Lenk stadium. Fred Bousquet swam a 49.15, good but also not as good as his 50, to wrap up a 1-2-3 finish from Auburn Tiger alums. Bousquet had an outstanding start, and was one of the few swimmers in this final who performed to expectations – this was nearly identical to his swim from French Trials in March.

This leaves Cielo and Oliveira (thanks to his 48.71 from Brazil’s long course Nationals in December) as the two individual entries; Chierighini locked up his spot on the relay with this swim. Nothing is certain until the official announcement, but nobody did anything here that would even remotely seem to take Fratus’ spot, though de Lucca may have put himself into position for a prelims swim.

If Thiago Pereira wasn’t happy with what seemed to be a strong 200 IM swim of 1:57.1 earlier in the meet; then he probably was really unhappy with the 4:13.48 he swam to win the men’s 400 IM on Friday. Still, that time moves him into the world’s top 10 and is only a second slower than he was in all of a 2011 season. Now 4 days in to a long, 5-day meet (that has included relay swims), that’s a good mark whether he wants to believe it or not.

He was 10 seconds ahead of his next-closest competitor Esteban Salgado in 4:23.08. Diogo Yabe, husband of the more famous Fabiola Molina, in 4:23.48.

Spain’s Mireia Belmonte took the win in this 400 IM in 4:39.41; that was a fairly comfortable win for her, and more significantly was a full two seconds faster than she was at this same meet last year (even though she was there racing Kirsty Coventry, giving her better competition). Though nobody expects anything great from her here (she was much faster than this swim last month at Spanish Nationals), it could give the Spaniard hope of a better season-end finish than she had in 2011.

Joanna Maranhao, who is representing Flamengo with Belmonte, wasn’t able to pull off the upset in this race like she did in the 200 IM. She did, however, swim well to take 2nd in 4:42.32, having been destroyed by Belmonte on the breaststroke leg as the difference-maker. That’s telling, as Belmonte is not typically that good on the breaststroke, at least in elite terms, so Maranhao really was not good to be beat that badly. Keeping in mind that her training cycles have been thrown off thanks to a nasty stomach bug last month, though, and that’s a strong swim for her (who has already sealed up an Olympic spot in this race).

Those two were 17-seconds clear of the next-fastest swimmers.

After shutting the lights down in the 50 fly on Thursday, Denmark’s Jeanette Ottesen (racing for Corinthians) returned to her prior pattern of solid, but not breath-taking, swims in this 100 free. She won in 54.37, which is about half-a-second slower than she was last month.

That makes the 50 fly time really stand out as a half-second, career improvement even when the rest of her races have just been normal, in-training swims for her. Maybe that says that she actually does have a chance to upset the medal-stand in the 100 fly.

Daynara de Paula from Flamengo took 2nd in 55.47; that’s the fastest she’s been since 2009. Larissa Oliveira was 3rd in 55.92, and Tatiana Lima 4th in 55.96. Brazil women’s swimming is still much stronger in the 50, which speaks to a lot of athleticism but a lack of development.

Felipe Franca de Silva didn’t match his pre-meet boasts about setting a World Record, however in this 50, despite a bad finish, the poor weather, and a slow day overall, ended up with at least a textile-record thanks to a 26.87 in this men’s 50 breaststroke. That does clear Cameron van der Burgh’s 26.90 from the semi-finals of last year’s World Championships (de Silva ended up beating him in the finals, but was not as fast). He is consistently good in this 50, as he now holds 11 out of the 21 fastest swims in history, with this one slotting in at number 7 – though he was twice faster in polyurethane. If he can bring that same consistency to his new-found 100 breaststroke speed, he’s a medalist in London.

Finally, we saw a little bit of speed again from the relays. Marcelo Chierighini pushed full-bore with a 22.03 leadoff for the winning Pinheiros relay. That’s a lifetime best for him and puts him into the top 15 in the world this year. It’s also three-tenths better than his previous lifetime best from the individual 50 free earlier this week. He had never been better than a 22.8 coming into this meet.

Pinheiros soared to the lead with 1799 points, after Flamengo were the leaders after the previous two days of the meet. Flamengo, despite another win by Cielo, slid sizably back as we saw the first serious lead open up in this meet. That 103.5 point margin can still be erased easily in a single record-breaking swim, but it is still a break. Minas, last year’s champions, sunk back to 4th, and are all-but-out of the team battle.

That’s quite slow from Cielo, especially after he boasted that he would break his textile record and go 47mid.

Don’t worry aswimfan, Cielo’s ‘friends’ will soon be on here claiming that it doesn’t mean anything

Scuba Steve,
It means something…but should he be worried?I dont know…but if i was a coach, i will be talking to him about how a good swimmer can do a event so bad in many ways(not soo good start-for him,bad uw recuperation,bad turn and bad coming home)

What i am worried is with 4×100 free.Bronze medal?Its gone., if the guys can not hold the Adrenaline in the… Read more »

Also, all Brazilian finalists added time from the prelims, with the exception of Cielo and ernesto Pires Dos Santo.

Do they get points from swimming fast in the prelims or what?

Forget about bronze, they’ll be lucky to scrap into Finals (remember Shanghai?)

The worst thing about these men free results is that Brazil can’t afford to rest Cielo for the 4×100 prelims, lest they want a repeat Shanghai.

aswimfan,
You have to make Olympic cut(48.74) in prelims or final.Dont matter, just do the time.What i can not understand is guys holding off like Fratus in prelims, making a time worse in finals…
For me, media made a big show(many 48´s in the final..blablabla), that got in their skin(swimmers) and everyone made mistakes in the event(includes Cielo got eaten by Bousquet in start).

All in all, the 100 free did not live up to expectations: it was a disaster!

Pereira’s time goes to show what I have been saying all along: he did not taper. I hope he finally breaks through and medal – it’s about time! Else, he should forget the IM’s and go for one of the 200’s in which he is good: back or breaststroke.

The same goes to Joanna Maranhão’s time: she is training through the meet.

And, also, like I said, Felipe Silva was bragging/boasting too much about breaking the WR.. it’d have been nice if he had gotten at least the 50m WR, but not even that. I hope he puts in a solid block of training… Read more »