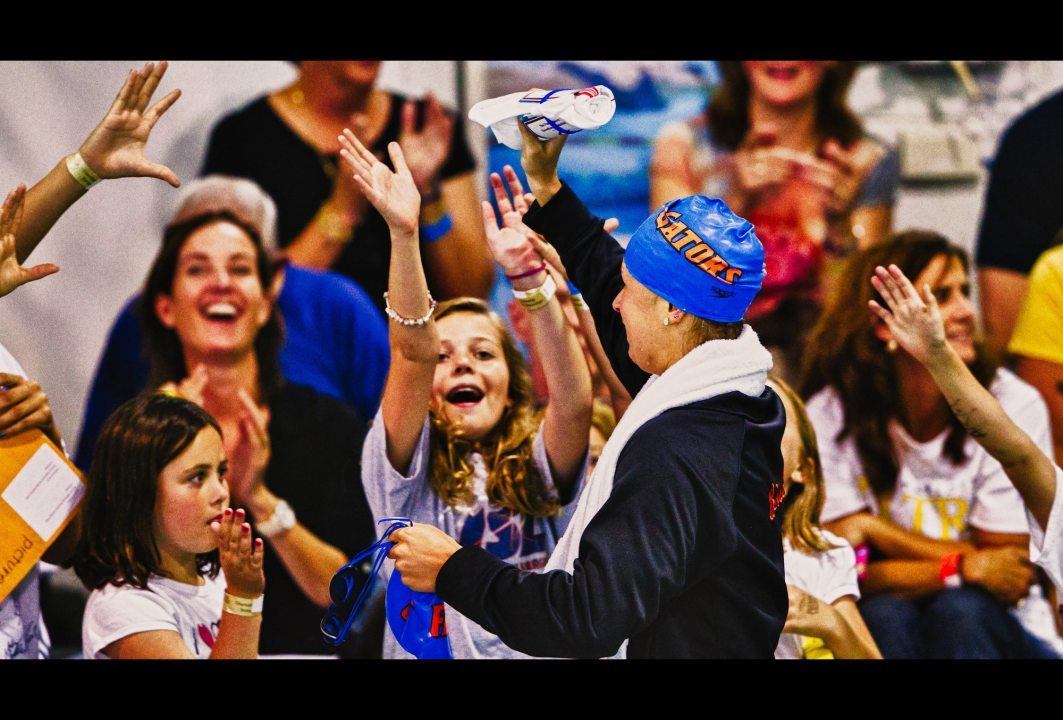 Florida post-grad Elizabeth Beisel was named the varsity squad's Swimmer of the Year for the 2013-2014 season. Archive photo via Tim Binning/TheSwimPictures.com

Gainesville, Fla. – Head Coach Gregg Troy and his staff announced the award winners from the 2013-14 season on Friday night at the team’s annual awards banquet. For the women, Elizabeth Beisel, Natalie Hinds, Taylor Katz, Jordan Smith and Kahlia Warner were honored. Meanwhile, Jack Blyzinskyj, Marcin Cieslak, Mitch D’Arrigo, Brad deBorde, Zach Hernandez and Sebastien Rousseau earned accolades on the men’s side. The awards were voted on and decided by the UF coaching staff.

“This weekend is a tremendous opportunity to create connections between the past, present and future,” Coach Troy said. “To honor last year’s efforts in the company of past Gators is a special time.”

In addition to the awards banquet, Splash Weekend continues tomorrow with the annual Alumni Swim Meet at 11 a.m. in the Stephen O’Connell Center Natatorium. Following the meet, there will be a barbeque at 1 p.m. in the Gate 3 lobby of the O’Connell Center. This weekend then concludes with the 2014 Southeastern Conference Championship men’s team being recognized at the end of the first quarter during the Gators football game tomorrow night against Kentucky. Last season’s title was the second straight for UF and the 35th overall in Florida’s storied history.

Giovanni Linscheer Award — Awarded to the athlete who contributed the most to the overall success of the team and displayed dedication, leadership and a positive attitude and solid performances

Tracy Caulkins Outstanding Freshman Award – Awarded to a freshman based upon her performance at SEC’s & NCAA’s. This individual exemplifies the competitive spirit of Tracy Caulkins i.e., dedication, tenacity and a great will to win

Tiger Holmes Caulkins Outstanding Freshman Award – Awarded to a freshman based upon her performance at SEC’s & NCAA’s. This individual exemplifies the competitive spirit of Tiger Holmes

Academic Award – Awarded to an athlete who achieved academic excellence

The Florida women’s team opens up its 2014-15 season in two weeks when the Gators host Arkansas on Saturday, Sept. 27 at 11 a.m. in the O’Connell Center Natatorium. The Gators are 5-0 all-time against the Razorbacks and last defeated them on October 20, 2011 when UF bested the Razorbacks, 173-125 in Fayetteville.

The above is a press release submitted to SwimSwam.