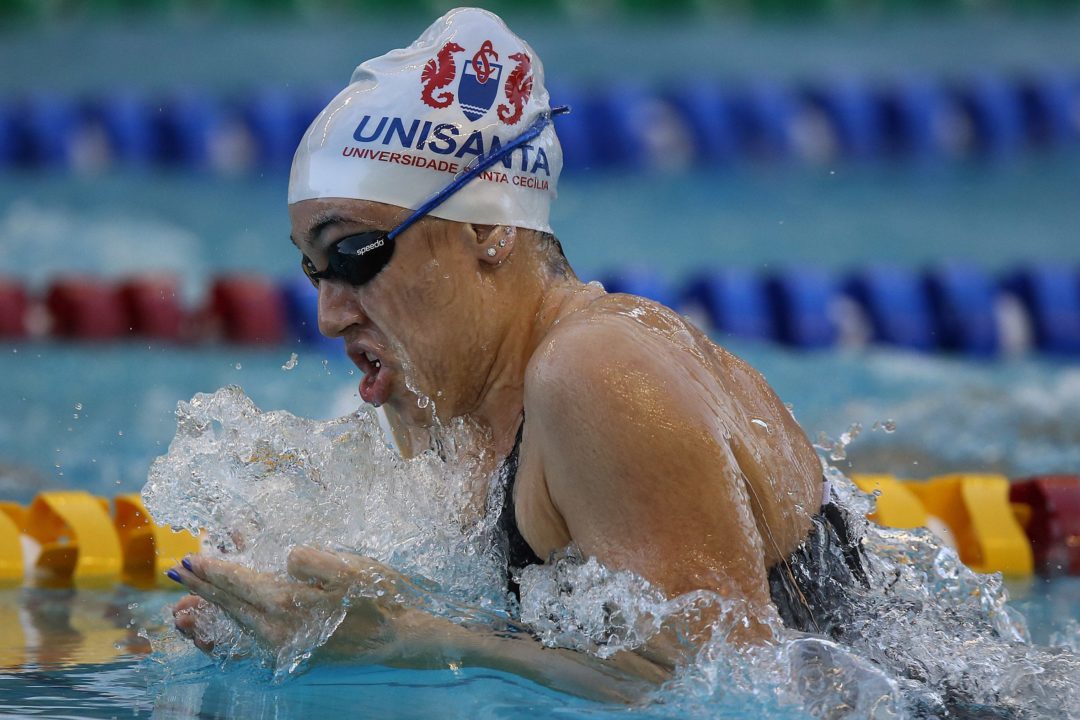 It was another chilly night in Sao Paolo on Thursday, with commentators in coats but swimmers suffering in swimsuits at the home of the Corinthians team, as day 4 of the 2013 Jose Finkel Trophy saw some of the best swims of the night.

Felipe Lima won the men’s 100 breaststroke in 1:01.02; that was far shy of what he was for bronze at Worlds, but with a somewhat depleted Brazilian breaststroke group that was still half-a-second better than Joao Gomes Jr. (1:01.54) and Felipe Franca da Silva who was 3rd in 1:01.75. Da Silva seems to still be struggling to return to form after emergency appendix surgery earlier this year.

Pedro Cardona was 5th in 1:02.70, continuing a very good send-off meet for the Brazilian Juniors team.,

Argentine Julia Sebastian, who represents the domestic Unisanta squad, won the women’s race in 1:09.44, with the highest-placing Brazilian being Pamela Souza in 1:10.90.

Daniel Orzechowski won the men’s 50 backstroke in 25.31, beating rival Guilherme Guido who was 25.61. Fabio Santi (25.74) gave the Pinheiros squad a clean sweep of the podiums, though they were still well behind in the team battle after four days.

The women’s 50 backstroke went to Etiene Medeiros in 28.25. She got the wooden medal for 4th place at Worlds in this race.

And finally, the second Argentine victory of the day went to Juan Pereyra in the men’s 800 free in 8:07.63, followed by Lucas Kanieski (8:08.73) and Marcos Oliveira (8:09.45). This was another podium sweep, though for Minas, who would come out of the day with a nearly-insurmountable 300 point lead.