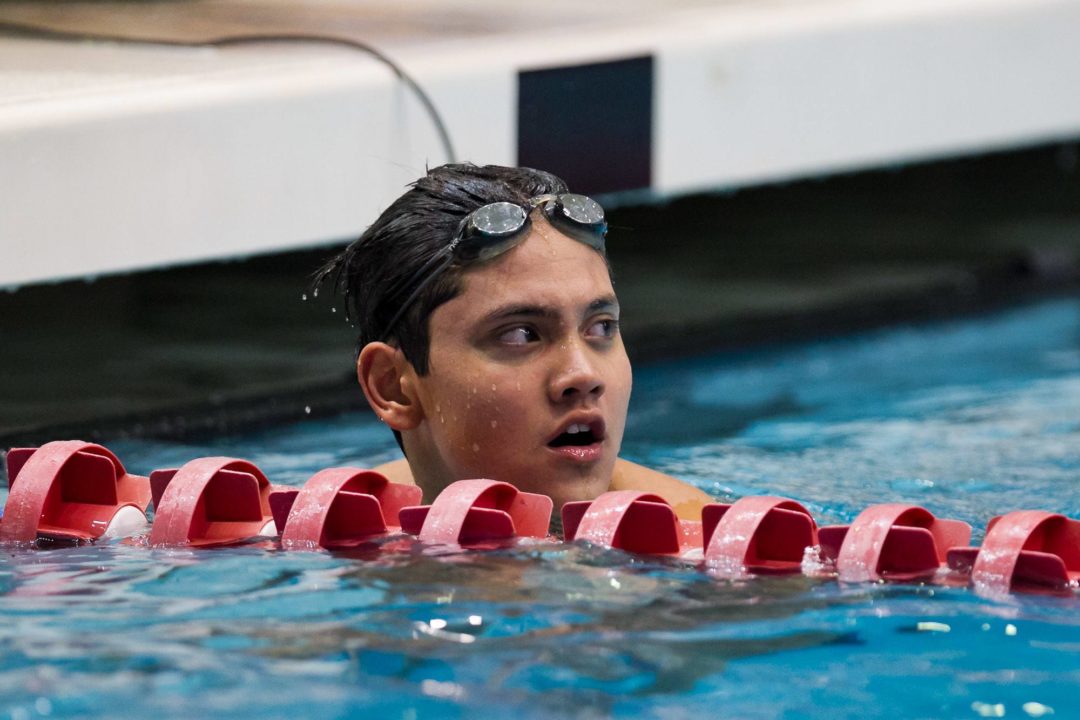 With the Southeast Asia (SEA) Games now underway, spectators have already glimpsed the greatness of Singapore’s rising star in 19-year...

Known primarily for his prowess in the butterfly events, where, while competing for the University of Texas Longhorns, Schooling was double NCAA champion, winning both the 100y butterfly and 200y butterfly events, it may surprise some to see his dominance in these freestyle events.  Of course, someone who is certainly not surprised is Schooling’s Texas coach Eddie Reese.

Prior to the start of these SEA Games, while hosting a Singapore Swimming Association-sponsored clinic with that nation’s head coach, Sergio Lopez, Reese foreshadowed his vision for Schooling at these SEA Games.  “If he were to pick a meet a year after the Olympics (next year), like the Asian Games, leave the fly events alone and compete in the freestyle and individual medley events, he will surprise people in the 100 and 200 free, as well as the 200 IM,” said Reese.

Of Schooling’s performance, Reese commented, “I’ve said before he is talented, and not nearing his best.  His 100m freestyle swim today was better than what Sergio and I expected. Breaking 49 seconds is unexpected, but going 48 is just beyond believable. His best events are the butterfly, so it is exciting to see how he fares.” (Singapore Today)

This echoes the sentiments of the athlete himself, who admits he did not formally prepare for his freestyle events.  “It is always great to have a good first day at the swimming competition and start it off with a big bang,” said Schooling. “I wanted to get two gold and two national records so I am glad I pulled it off. I don’t really practice much in the freestyle, so I just winged it. Seven more events (in this SEA Games) is a lot, and a lot of things can happen, so I just take it one day at a time … I am confident with what I can do.” (Singapore Today).  Schooling is entered in a total of nine events over the course of the Games.

Looking slightly more long-term, Reese talked high-level on the plan for Kazan, saying, “After this meet (SEA Games) we’re going to talk about his lineup for the world championships… I think getting the medals is the most important thing.”

That`s a ridiculous time for a 19years-old.I remember when Cielo made 48.61 at nineteen(in 2006) and was top5 in the World.A fly specialist doing that…insane!

We have to remember, Joseph has two events everyday practically. And his main goal is to deliver the gold medals. So some of his events, especially his individual events, he may have to hold back to ensure he has enough gas left.

For example today’s 200 Fly will come after his 50 Free. While I hope he can clock a good time in the 200 Fly, he may be abit spent from earlier exertions

Sorry guys, so far my predictions have been a tad too fast. Hopefully Joe goes udner the 51 barrier.

How much you want to bet Ryan Murphy joins his Bolles teammates Schooling, Condorelli, and Dressel in the sub-49 club this summer, if he gets a chance to swim the 100 free at anything close to a proper rest? It’s a shame that Worlds and Summer Nationals overlap.

I always thought Ryan Murphy would have a great 100 free. His yards times are superb for a primary backstroker. 42 in high school. And he split a 41.14 at NCAAs after an exhausting schedule.