Schinella, Sanders, and Powers Sign Letters of Intent to Swim for Michigan 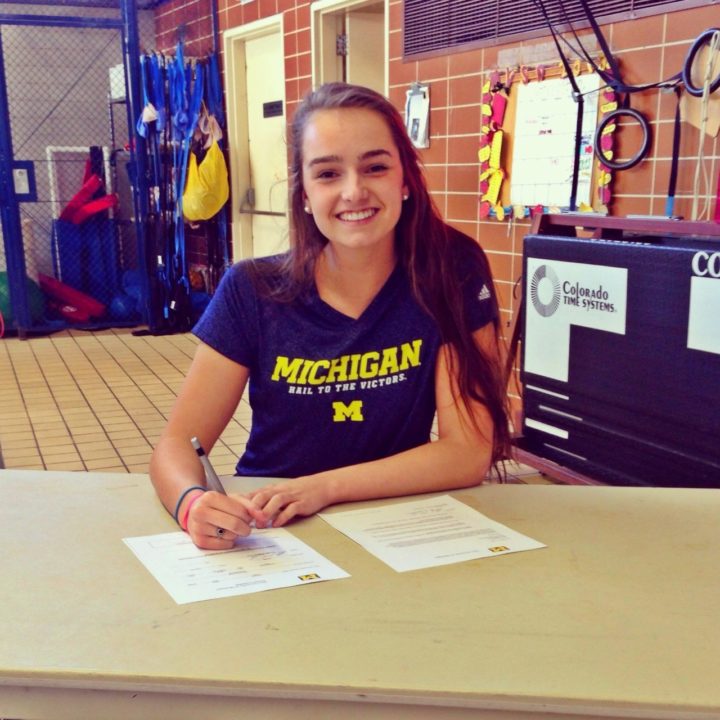 Elliott Schinella, Tristan Sanders, and Paul Powers have all officially signed their National Letters of Intent to swim for the Michigan Wolverines.

Elliott Schinella, who is in the headline above, is an in-stater from Orchard Lake, about 45 minutes away. There, she swims for Mercy Catholic High School. Over the weekend, she was unable to defend her Michigan Division I High School State Championship in the 100 back, but did place 2nd in 55.63. That’s just off of her lifetime best of 54.91. Read more about Schinella’s commitment here.

Among those signing to the men’s team includes Tampa-based freestyler/backstroker Tristan Sanders (below). Sanders, who swims for Palm Harbor University High School, has also already had his senior state championship meet. Among Florida’s biggest schools, in class 4A, Sanders was the state runner-up in the 50 free with a 20.64, and was the state champion in the 100 back in 47.79. Sprint freestylers and backstrokers were the biggest needs for the defending champions coming into the fall, so his signing could not have been more timely.

“I am thrilled to be a future student athlete at the University of Michigan,” Sanders said. “Under the guidance and leadership of the coaching staff, I believe I will become the highest caliber swimmer possible, and learn many things outside of the pool as well.  I’m excited to get to work with the coaches and fellow Wolverines and see what we can accomplish together as a team. Go Blue!” (Read more about his commitment here).

Tristan Sanders signs his National Letter of Intent to swim for the Michigan Wolverines.

And finally, one of the earliest verbal commitments in the class of 2014, Georgian Paul Powers has signed his National Letter of Intent.

Powers also traveled with the U.S. Junior Team to the FINA World Cup stops in Tokyo and Beijing. (Read more about his commitment here).

Paul Powers signs his National Letter of Intent to swim for the Michigan Wolverines.

Where is Alex Katz’s picture?? 😀