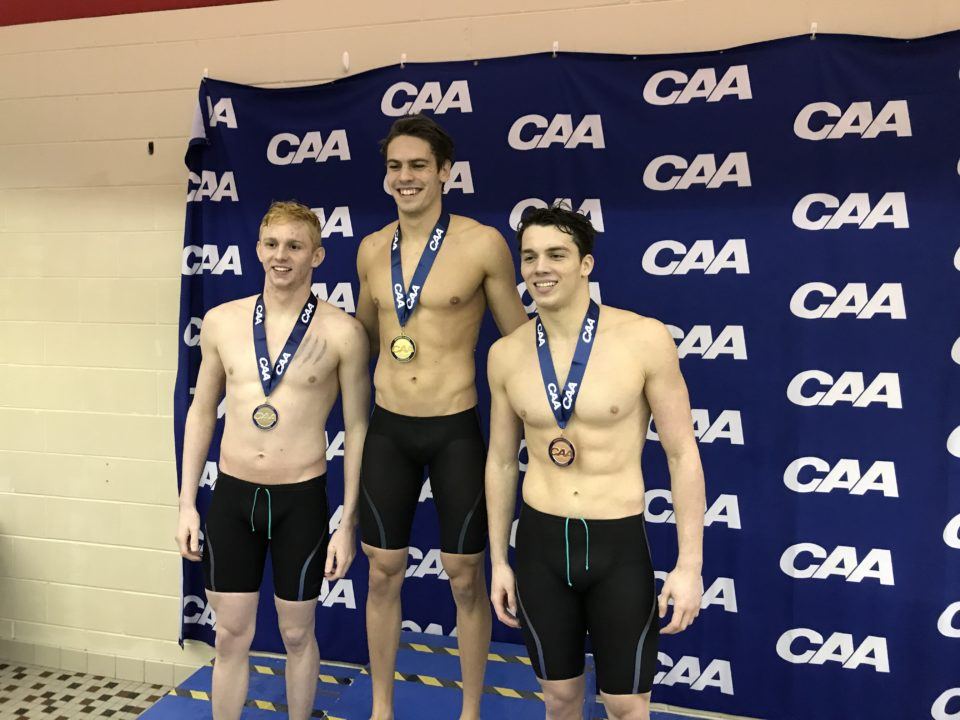 The W&M men extended their lead on the second night of the 2019 CAA Championships, while JMU and W&M women continued to duel it out. Current photo via Tribe Athletics / Jacob Skipper

As we’ve said, it looks like this meet will be a battle between William & Mary and JMU, and there was no better reflection of that tonight than in the 500 free, as each team had four women in the A-final, and it was a tight race for first place. JMU’s Juliana Jones held the lead through the 300 yard mark, but defending champion Megan Bull never panicked. In fact, the W&M sophomore negative split the 500, going out in 2:22.95 and coming back in 2:21.67, touching in 4:44.62 to Jones’s 4:45.83.

Towson junior Megan Cowan won the 200 IM, essentially leading from start to finish, ultimately touching in 2:01.06. W&M got 2nd and 8th, and JMU took 3rd, giving the Tribe a 19-point lead heading into the 50 free.

In the 50 free, Northeastern junior Megan Clark, the fastest woman all-time in the conference, successfully defended her title, with her winning time of 22.43 just a hair slower than last year’s winning time of 22.38. JMU’s Bonnie Zhang, one of three Dukes in the A-final, took 2nd in 22.61, and JMU was only five points behind W&M.

While the team race may not be as dramatic on the men’s side — W&M projects to win easily — the races were relatively faster than in the women’s competition, as records went down in three of the four races tonight.

The first race of the night, the 500 free, was the only race not to see a record go down. However, Drexel senior Patrick Cobb did defend his title, posting a 4:24.77, while W&M took 2nd-5th and 7th.

Interesting note here: both the meet and all-time conference records in this event are relatively old, and belong to swimmers from schools which are no longer in the conference…

Lopez, of course, was a Spanish Olympian and is now the head coach at Virginia Tech.

The same three men topped the 200 IM podium as last year, albeit with two of them in a different order. Towson’s Jack Saunderson repeated as victor, once again setting a new CAA record with his time of 1:45.46, 0.30s faster than last year. W&M’s Ben Skopic and Drexel’s Jason Arthur, both juniors, swapped places from last year; tonight Skopic took 2nd with a 1:46.20, and Arthur finished 3rd in 1:46.73.

W&M’s Colin Wright made it 3-3 for last year’s event winners. He knocked 0.19s off his time from last year to not only repeat as champion, but also to set a new CAA record. The previous record of 19.59 was set by UNCW’s Dan Gallagher way back in 2002. Gallagher hit that mark in the prelims of the 2002 NCAA championships, where he ultimately finished 4th in a field in that included Roland Schoeman and Anthony Ervin. That same time today doesn’t even garner a NCAA invite.