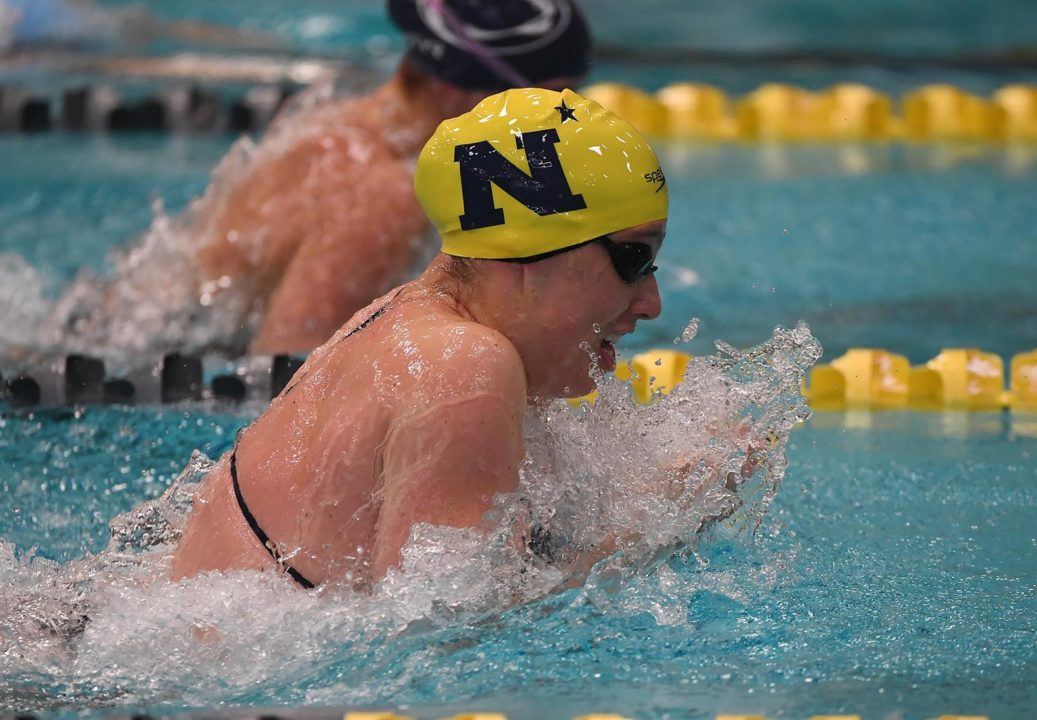 Lauren Barber, a senior, is now a perfect 10-for-10 in individual events in her Patriot League career.

Barber, a two-time league Swimmer of the Year, swam the breaststroke leg with a modest .45 reaction time. Her Meet Record in the individual 100 breaststroke is 1:00.77 and her overall League Record is 59.71. Both of those times would be demolished if she’s able to keep that same over-water speed from the relay in the individual event later in the meet. She qualified for, and swam, 3 races at last year’s NCAA Championships.

Barber later pulled off her first individual win of the 2019 meet, and 10th of her career, in the 200 IM. She swam 1:56.23, which broke the Bucknell Pool Record and won the race by 5 seconds. That’s about half-a-second slower than her Meet Record set at this meet last year. She has still never lost an individual event at the Patriot League Championships as a senior.

Navy freshman Martina Thomas kicked off the individual portion of her Patriot League career with a win in the 500 free, swimming 4:45.67. She won by 3-and-a-half seconds over Bucknell freshman Maddie Hartigan (4:49.67). Thomas’ time is the fastest Patriot League title-winning swim since 2010. She also had the fastest split of any team on the 800 free relay yesterday, even being the leadoff, in 1:45.0.

Navy’s 4th win of the day, another freshman victory, came from freshman Hannah Montau on the women’s 1-meter with a score of 291.70. She and sophomore teammate Meghan Gerdes (267.60), the runner-up, both hit Zone Qualifying Times.

The only non-Navy women’s win on Thursday came in the women’s 50 free, where Lehigh sophomore Ann Foley won in 22.94. Her lifetime best prior to Thursday was 23.16 from last year’s championship; she was sub-23 twice today, including a 22.85 in prelims.

In the men’s meet, with no diving on day 2, it was actually Navy’s chief athletic rivals, and future military colleagues, from Army West Point who took the lion’s share of the gold medals by winning 3 of 4 events. Even so, Navy’s depth more-than-tripled their lead from day 1. The Midshipmen had an incredible 12 A-finalists in 3 individual events on Thursday.

Navy’s lone winner came in the day’s first men’s race, the 500 free, where sophomore Ryan Waters took the top spot in 4:18.59. That cuts a second from his previous lifetime best at this meet last year and marks a 2nd-straight event title for him. He was only .03 seconds short of the Pool Record.

That swim led a 1-2-5-7 finish, which echoes a theme of the session where Navy did most of their work to extend the lead in prelims by earning a pile of A-finalists.

Army sophomore Brian McKenrick won the 200 IM in 1:45.67 for his first league title. Army has won that event in 3-straight seasons, with McKenrick picking up the torch from graduated teammate Peter Mikheyev, who won the last 2 event titles.

Army followed that with another win in the 50 free. This time it was Josh Zock who touched 1st in 19.82. That was a 3rd-straight individual win for sophomore men on the day. Zock picked up another Army streak from a graduated teammate: Brandon McCredie had won the last 3 titles. Zock’s swim is also the 2nd-fastest Patriot League winning time in conference history behind Noah White’s 19.74 from 2004.

On Friday, Navy and Army each hold 3 top seeds in the 6 individual swimming events. The men’s 1-meter will also happen on Friday; Navy went 1-2-3 on Wednesday in the 1-meter, with a significant gap to 4th place.

Barber has never lost because she chose to go to a mid level d1 school where she would be the top swimmer all the time. If she was at a top tier d1 school, her times would be middle of road & she would not be beating girls by 5 seconds, like she is in patriot league. – I guess it all depends what you want.

She also decided to serve her country by joining the Naval Academy (which has a less than a 10% acceptance rate to attend). Shame on you, Sunny Cal, for trying to reduce her achievements. Great job Barber….no matter where you swim (even though SwimSwam ranked the Naval Academy in the top 50 of Division 1 women’s swimming at the beginning of 2018-2019 season).