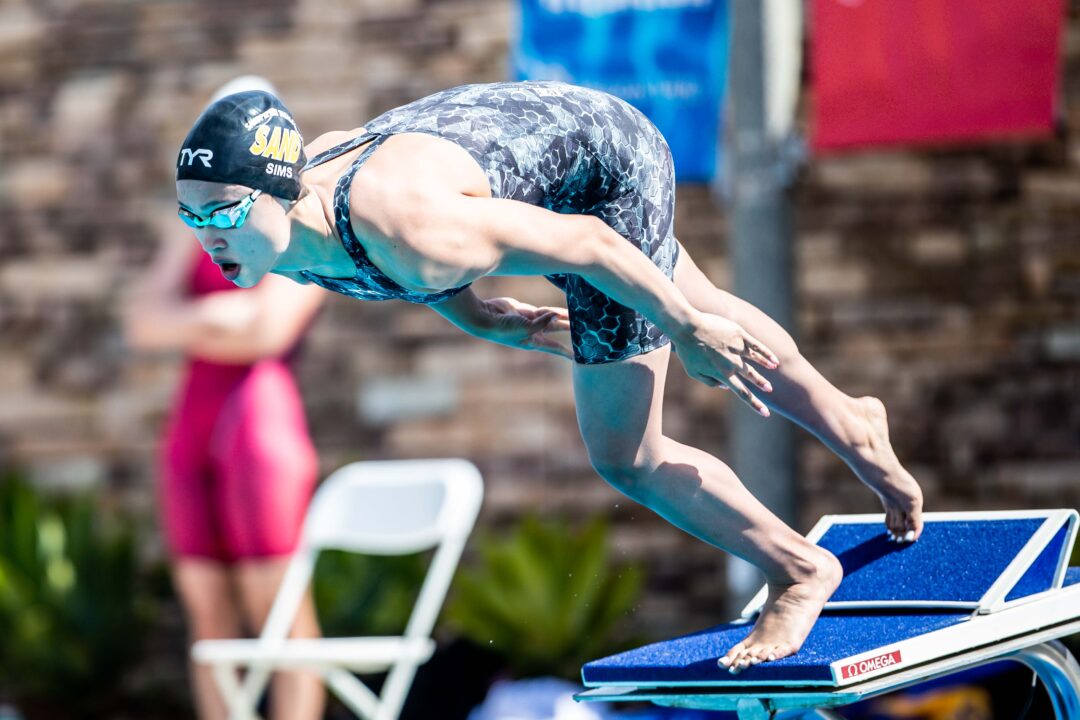 The quartet of Bella Sims, Katie Grimes, Macky Hodges, and Claire Weinstein put up a time of 6:52.66 that obliterated the 15-18 NAG by over 13 seconds. Archive photo via Jack Spitser/Spitser Photography

Decades ago, it was commonplace for the top training groups in the United States to not be centered around collegiate programs, but rather around club teams made up of mostly high-school-aged swimmers, especially females. The Sandpipers of Nevada are recapturing a bit of that swimming nostalgia, flexing their teenage training group on Wednesday with a time in the 800 free relay that would have placed 2nd at the 2022 NCAA Championships.

The quartet of 17-year-old Olympian Bella Sims, 16-year-old Olympian Katie Grimes, 18-year-old Macky Hodges, and 16-year-old World Champion Claire Weinstein put up a time of 6:52.66 at the 2022 Speedo Junior West Championships that not only obliterated the Sandpipers’ own meet record time of 7:02.90 from just a year ago, but also shattered Magnolia Aquatic Club’s 15-18 National Age Group record time of 7:05.91 by over 13 seconds. Plus, their time also would have overtaken the University of Virginia’s second-place-finishing time of 6:53.47 from NCAAs last year.

Yes, a club team full of teenagers is faster than just about every collegiate program in the United States. And it wasn’t even a mega-club team spanning across multiple states, like NCAP, that pulled off this feat. It was a true training group concentrated in southern Nevada, which has suddenly turned into a hotspot to get junior swimmers onto international teams.

Follow Sims was Grimes (1:43.26), Hodges (1:44.60), and Weinstein (1:44.02). Hodges, a former swimmer for the Mission Viejo Nadadores who just began training with the Sandpipers this season, saw major improvements in her 200 free on this relay, as her split was considerably faster than her flat start best time of 1:46.07. Grimes and Weinstein were also faster than their times of 1:44.96 and 1:45.50 respectively from last year, although it’s important to note that Grimes led off in 2021.

In case you’re wondering, here’s how the Sandpipers’ splits stack up to Virginia’s splits from NCAAs last year, as well as Magnolia Aquatic Clubs’s previous NAG:

Also, here’s how the Sandpipers’ splits stack up against their previous meet record from last year:

Added at the bottom!

do all of these sandpiper swimmers home school/do high school online?

i think its half/half. bella could not swim for high school because of USA swimming.

these teenagers are getting scary impressive

And yes let’s not forget Erin gemmel 1:57.14 (.4 seconds behind ledecky) has Any country have 3 different swimmers split under 1:55 in one year?

Yes and the one country I think that have the talent that maybe could matched the Us team is probably Australia cause they also have a lot of young swimmers.

So ….. for the women’s 4 x 200 meter freestyle relay at the 2023 FINA World Aquatics Championships, it’s Grimes or Weinstein and Gemmell, Sims, Ledecky (not necessarily in that order).

Definitely amazing seeing Sims go a 1:40.7. Virtual battle between her and Summer tomorrow. Great splits all around, would have guessed that Weinstein would’ve been a bit faster, but still an amazing split. I think she’s more of a LC swimmer at this point. Wow Hodges 1:46 to 1:44, and Grimes 1:43! Great night overall

I’m thinking both McIntosh and Sims get under 4:30, it’s just a matter of by how much.

Anyways, I love how we are talking about teenagers possibly going sub-4:30 when the fastest time in the NCAA right now is a 4:38. The contrast between the 500 free being the weakest women’s collegiate event and the fastest women’s age group event is ridiculous.

The fact both these girls are going Ledecky like times is insane I’m excited for how the meets shape out.

Yeah, the fact we thought there would never be another Ledecky and were about to get 2 of them.

“This is getting out of hand. Now there are two of them!” – Rowdy, probably.

Bella Sims is also another young swimmer that impressed me the past few months and she keeps getting improving .