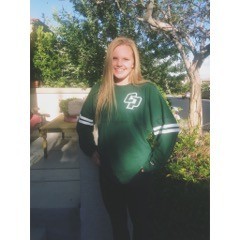 Hailey Houck, who swims for Palo Verde High School in Las Vegas and Sandpipers of Nevada, has given her verbal commitment to the Cal Poly Mustangs for 2016-17. Current photo via Ron Aitken

Houck has made impressive strides over the last two years and she had a particularly strong long-course season this past summer. At the NCSA Summer Championships at IUPUI, Houck went personal bests in the 400/800 free, 100/200 fly, and 400 IM, the latter of which was a 2016 Olympic Trials cut. A week later she competed at Junior Nationals in San Antonio and notched a best time in the 1500. From there she was selected to represent Southern California at the North American Challenge Cup, which produced personal bests in the 100 free, 200 breast, and 200 IM. Houck’s times include:

Houck has the potential to be a three-event “A” finalist for the Mustangs. Her best 1650 time would have scored fourth at 2015 Mountain Pacific Sports Federation conference championships; her 400 IM would also have been fourth, and her 200 fly would have been right on the bubble between the “A” and “B” finals.