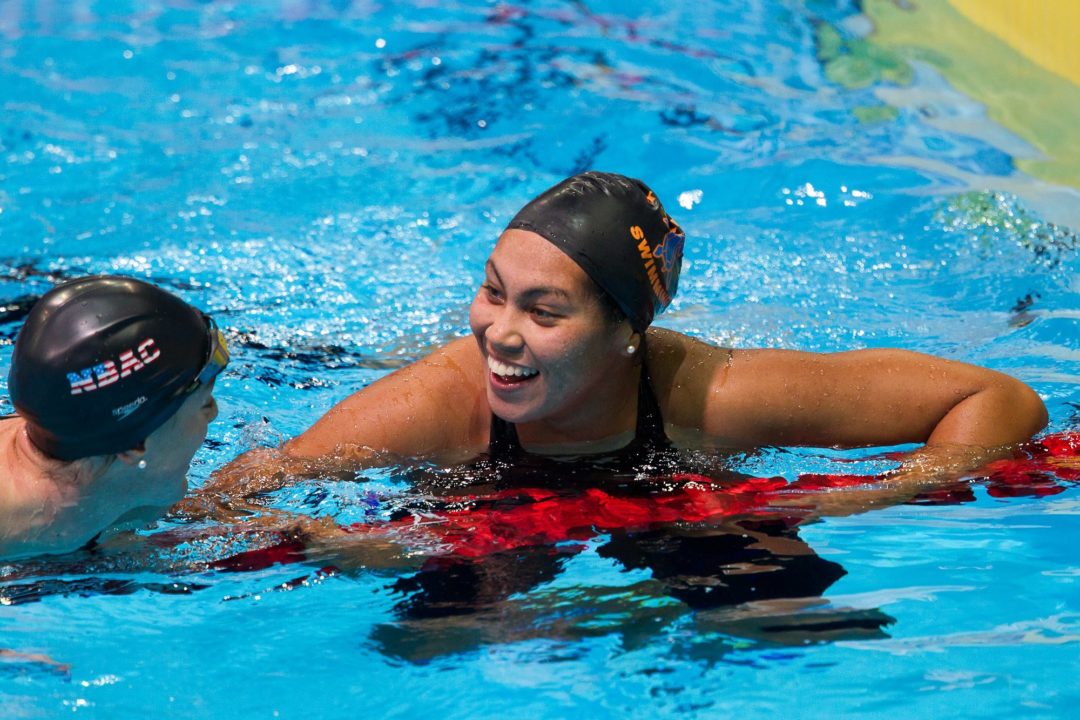 Carondelet's Chelsea Chenault, above, is just one of the many stars that populate California's East Bay League. (Photo: Tim Binning/TheSwimPictures.com)

California’s East Bay League is one of the most impressive Leagues (equivalent of a District) in the country, boasting two of the nation’s top high school teams in Carondelet and San Ramon Valley. The league held its championship meet last weekend, in preparation for next weekend’s North Coast Section Championship.

The San Ramon Valley girls got the meet off to a roaring start in prelims on Friday, with a 1:43.80 in the 200 yard medley relay – one of the fastest high school times in the country this year. No splits were available for prelims, which is disappointing because that’s where many of the meet’s top times came from after the heat and the JV championships slowed down Saturday’s finals session, but we do have splits from their 1:44.64 in finals that included Gianna Garcia, Heidi Poppe, Dani Orlandi, and Abigail Miller. Poppe, a junior, is the known star of that group, and she split a 28.68 breaststroke in finals. The senior Orlandi, who is committed to Cal Poly next year, might be the rising star though. She was a 24.8 on the fly leg in finals, and also placed 2nd to Celina Li in the 100 yard fly with a 56.26.

Garcia is just a freshman, as is Miller, and they were also both in the top 6 of the individual 100 yard fly.

Olympic Trials finalist Celina Li, as we mentioned, was the winner of that 100 yard fly in 54.69, just missing the Meet Record.

Li did get the Meet Record in the 200 IM, easily winning in 1:58.26, which broke her own League Record set last season by a tenth of a second. That swim, though spectacular, was not without controversy. Li missed the original 200 IM while taking an exam, but was allowed to swim a finals-counting time alone later in the day to take the East Bay League title.

As an indication of how fast this meet is, the JUNIOR Varsity 200 free was won by Danielle Zacharias from San Ramon Valley in a 1:57.6. A 1:57 can’t even crack the varsity ranks for San Ramon Valley, whose depth showed with total domination of both the boys’ and girls’ JV meets.

Amador Valley’s Iris Brand won the 50 free in 23.98, ahead of a final that included five freshmen. Brand set the League Record last year when she was a freshman herself, and should be looking for a 23-low at next weekend’s North Coast meet.

Madison White, who is headed to UCLA next year, won the girls’ 100 free in 51.42, and freshman Madelyn Murphy was 2nd in 52.10. That’s another Carondelet 1-2 finish in a freestyle race, even with Chenault chosing not to swim the race this season (she’s the League Record holder.)

Poppe, who swam the 100 fly as her second individual in a bit of an unusual combination, won the 100 breaststroke in 1:02.03. Poppe flirted with the minute barrier at Winter Juniors, where she was the eventual Junior National Champion in this event, and if history proves true, she usually saves her best swims for the North Coast Section meet.

The Carondelet girls saved their best relay for last. With a stacked quartet that included Chenault, they put up a 3:26.14 to break the Meet Record and come within two tenths of their overall League Record set last season (and one would presume that they will get that in a few days.)

The boys’ meet doesn’t have quite as big of names as the women’s meet did (partially because the great team at Carondelet is women’s-only). The league is definitely in an up year on the boys’ side, however, beginning with a new Meet Record from Granada in the 200 medley with a 1:34.25. That just beat-out the defending champ from San Ramon, who took 2nd in 1:34.98.

Granada Hills continued their hot early start with a win in the 200 free from freshman Maxime Rooney in 1:40.24. Rooney is a National Age Group Record holder in this event for 13-14’s, and though he was nowhere near that time here, he still took the win over defending champion Dillon Williams (1:40.95.) Rooney’s teammate Nick Silverthorn didn’t swim this event this year, but he will go after it at the NCS meet next week, which should be a great battle. (He’s also swimming the 100 breast as his second event there.)

Last weekend, Silverthorn instead swam the 200 IM. He finished under the old Meet Record in 1:53.41, but this year that was only good enough for 2nd place. The win instead went to David Morgan from De La Salle, who is USC bound, in 1:53.31. He held off an incredible breaststroke leg from Silverthorn (he split 31.9)

Granada High School got yet another victory in the next race, making four wins in five events before the dive break, thanks to a 21.20 50 freestyle from  junior Bryce McLaggan. San Ramon Valley made a huge move in scoring though, as they went 2-3-4, and also got a win in the B-Final from Jack Ryan.

Amador Valley’s Jason Chen took down yet another Meet Record in the 100 fly, with a 49.71 for the victory. Breaking the usual trends we’ve seen out west of youth making big moves, the top five finishers in that 100 fly were all seniors.

Sean Bloore from Monte Vista kicked off the second half of the meet with a 46.08, followed by Silverthorn with another runner-up finish.

Amador Valley senior Jason Chen added his second win of the day with a 50.07 in the 100 backstroke. He’s the defending League Champion and record holder, and was great on both the front-half and back-half of this race. Rooney, the freshman, was 4th in 52.04.

Sam Protich from De la Salle won the boys’ 100 breaststroke in 58.02, followed by California High School’s Rolland Lee in 58.94. The name in the 3rd-place position will be familiar, as that bronze went to freshman Hank Poppe from San Ramon Valley in 59.10 to automatically qualify him for the North Coast Championship meet. Poppe is the younger brother of Heidi, winner of the girls’ breaststroke, and is showing the same impressive lineage for breaststroking as his older sister did as a freshman.

Granada High School would finish the meet with another victory in 3:07.03, followed by San Ramon in 3:08.18. That made five total event wins for the meet runners-up, but depth was the name-of-the-game as San Ramon roared to a victory without winning a single event. The depth story was perhaps told, once again, through the JV results. San Ramon won that meet with 516 points; Granada was only 7th (out of 8) with 122.

I heard Heidi Poppe went 27.3 in prelims… is she commited anywhere yet? Cal????

Poppe is only a junior, so she can’t formally commit until next year. Most verbals don’t come until at least the summer after junior year, though she wouldn’t be the first Californian to commit early.

Cal badly needs a sprint breaststroker in the next recruiting class-Poppe’s high on the list. In addition to Li, current Bears Breed and Nanfria (also SRV) are from the East Bay League.

Granada came in second place, not seventh place with a total of 338 points–not 122 as mentioned in the above article

Teresa, that paragraph is referring to the JV results, as stated. The full varsity results are listed below that.