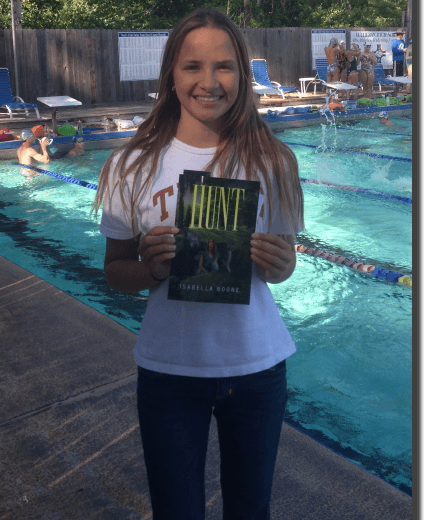 The Dad’s Club Swim Team in west Houston is best known as the launching point for the career of the...

The Dad’s Club Swim Team in west Houston is best known as the launching point for the career of the legendary Richard Quick, arguably the greatest swim coach in American history, who was their head coach and turned the program into a national power in the 1960’s and early 70’s.

The club now, however, has another claim to fame from outside of the pool: 13-year old swimmer Isabella Boone. She’s been training with the club for the last 5 years, and in February published her very first book.

The novel is called Hunt and is both authored and illustrated by Boone.

From Amazon, the Description of the book:

Kenai Hunt wasn’t expecting the cruel act from Zuko that cost her pack leader’s life. The wolves believe that there is only one creature advanced enough to bring Lina back from the dead…Humans. With the help of the West Pack, Kenai is transformed into a human and sent off onto an adventure that could mean life or death. While Kenai learns to become one of us, she’s swept up into a human’s home and adopted… Would she dare leave the humans she’s grown to love? What will she chose? Staying a human… Or being a wolf?

According to her bio, Boone has been writing books since she was four years old, and seems to be quite talented. All reviews thus far  have been 5 stars (though, in fairness, one of those was by “James Boone,” who I assume is related.)

The book is available for sale on Amazon in both hardcover and paperback, and is available for download on both NOOK and Kindle reading devices. Get it from Amazon here: http://www.amazon.com/Hunt-Isabella-Boone/dp/1479785687

I think you are confusing Richard Quick with Skip Kenny. Quick was at SMU/Dallas Swim Club while Kenny was at Dad’s Club.

Oh, never mind. My bad. I might be old, but too young to realize that I arrived in Dallas the same year Quick did.

Thank you so much Braden for doing this for me! The whole experience of writing a book has been so amazing, and I really can’t believe I’m becoming so well-known in the Dads Club swim team world! This has been my dream ever since I began writing. Thanks for being one of the people who’ve helped make my dream a reality.