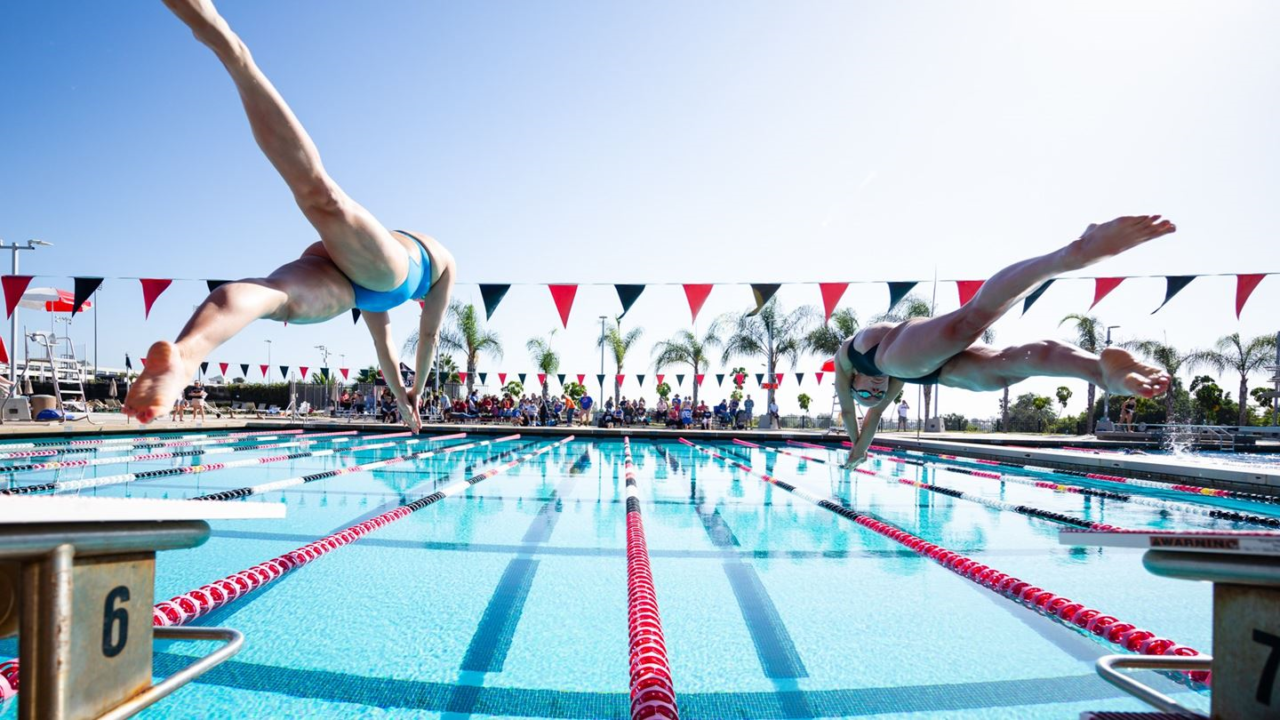 “We really had highlights all throughout our roster today,” noted head coach Mike Shraeder. “Getting the chance to compete at home, we had a lot of our administration, a lot of people who work in our athletic department and support us on a daily basis come out and that just makes our young people and I feel great.”

The Aztecs started off the meet strong with a one-two finish in the 200 medley relay, with the quartet of Elli Ferrin, Klara Thormalm, Courtney Vincent, and Alma Thormalm finishing in 1:41.70 while the relay team of Evonne Stehr, Morganne McKennan, Lizzie Menzmer, and Peyton Wilson touched the wall just behind them with a time of 1:45.64.

SDSU continued the first half of the swimming portion of the meet strong, taking first place in four of seven events before the break. Mia Ryan tapped the wall with a time of 1:51.97 to take home the 200 freestyle title, while Ferrin recorded a time of 55.63 to bring home gold in the 100 backstroke event. Klara Thormalm continued her reign on top of the breaststroke ranks with a first-place finish in the 100 breaststroke with a time of 1:02.05.

The Thormalm sisters continued SDSU’s success after the first swimming break, as Alma Thormalm took home the 100 freestyle title with a time of 51.34 while her sister Klara swept the breaststroke events for the second-straight meet with the top time in the 200 breaststroke, tapping the wall in a season-best 2:14.79. San Diego State closed out the meet exhibitioning all swimmers in the final three events.

MEET RECAP
The dual meets began with the 200 medley relay where the team of Emily Morton, Jenna Sanchez, Sarah Hamilton and Amy Griffin had the top performance for the Waves, finishing in sixth with a time of 1:52.20.

The 50 freestyle was led by junior Sammie Slater who posted a time of 25.45, good for eighth overall. In the 100 butterfly, Morton took fourth-placed with a time of 1:00.26, followed closely by Hamilton who came in fifth in a time of 1:00.49. The best showing in the 200 individual medley came again from Morton who placed second with a time of 2:09.38.

Lily Stotz recorded the top place for the Waves in both the 1-meter and 3-meter diving events. Stotz took eighth on both boards, posting scores of 189.45 and 175.90 respectively.

The final event on the day was the 200 freestyle relay, wherein the squad of Jasmine Williams, Griffin, Sanchez and Nohea Lileikis snagged a fourth place finish with a time of 1:40.73.

QUOTABLE
“We had some very solid swims today.” said Head Coach Joe Spahn “Our upperclassmen did a great job showing our newcomers how we travel as a team and get up for each other. I think this is a great stepping stone for our season and I’m ready to see what we do tomorrow.”

NEXT UP
The Waves will be competing in San Diego again tomorrow, October 19th, against the University of San Diego Toreros. The meet will begin at 1 p.m.

SAN DIEGO – Boise State swimming and diving was on the road at San Diego on Friday where the Broncos earned a split defeating the Pepperdine Waves 252-43, but were edged by Mountain West-rival San Diego State 158-134. Boise State won seven of 16 events at the tri-meet (scored as duals) including six individual races and one relay. The split Friday afternoon moved the Broncos to 3-1 overall on the year in duals.

“We made some good strides of improvement since last week with several season bests,” said head coach Christine Mabile. “We’ll be working on cleaning up some of our race details to prepare for Nevada in two weeks.”

Hayley Hill recorded Boise State’s first victory on the day when she won the 1,000-yard freestyle with a season-best 10:17.08.

Brittany Wen and Robin Pinger were next to claim titles as Wen won the 200-yard butterfly by clocking a season-best 2:04.64, while Pinger was victorious in 50-yard freestyle with a 24.13.

The seventh Bronco win came in the 200-yard freestyle relay where the Broncos’ A team of Emmie Jennings, Madison Frederick, Wen and Pinger clocked a winning time of 1:37.10. Boise State’s B team (Carly Palmer, Jamie Nats, Zoppei and Molly Hogg) took second with a1:38.62.

The meet started out with the 200-yard medley relay where the Boise State A team (Ronquillio, Pinger, Zoppei and Frederick) took third with a 1:46.42.

Next up for Boise State is a trip to Reno, Nev., to face the Nevada Wolf Pack in a MW dual on Nov. 2.