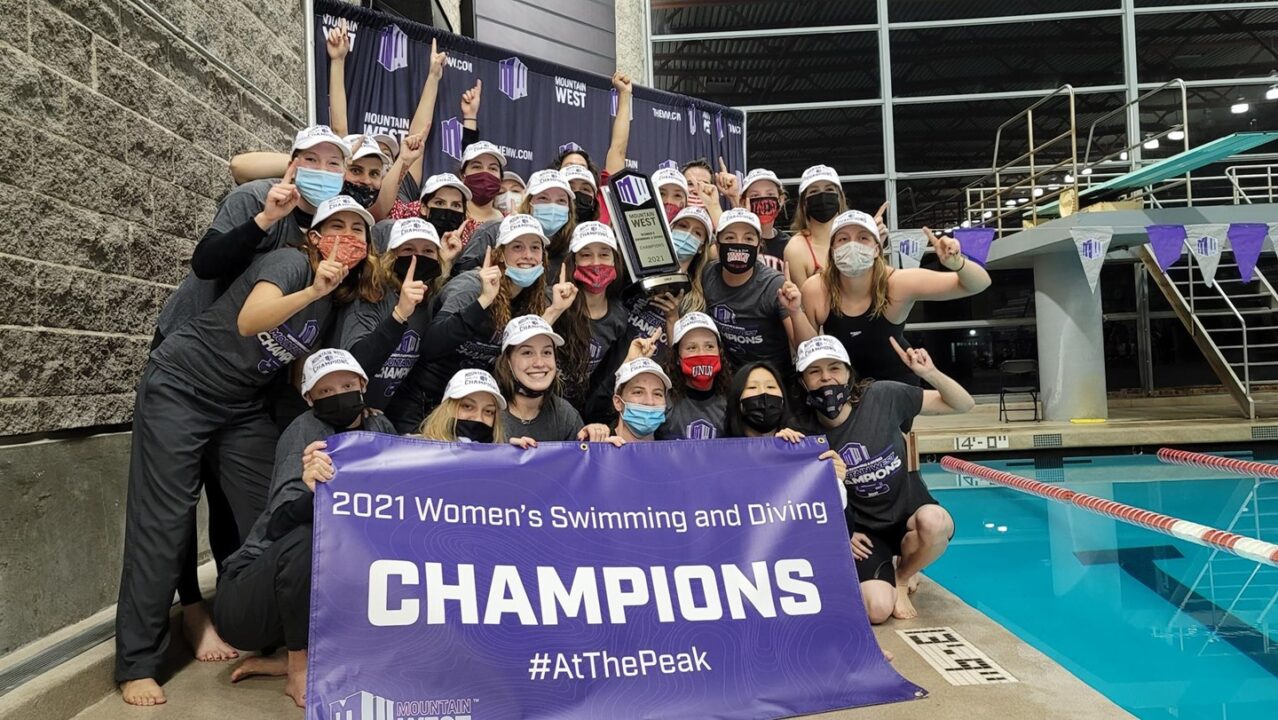 SDSU, after losing their winning streak to UNLV last year, is back, winning the Mountain West title with a record amount of points. Current photo via Mountain West

This marks the sixth overall time SDSU has won the meet.

Both were significantly faster than last year, when Ash won in 16:44.35 and McHugh took 2nd in 16:53.02. McHugh is the first Nevada athlete to win the event.

Fresno State junior Athena Clayson is on track to go 4-for-4 in her college career in the 200 back–the junior won her third consecutive 200 back title on Saturday with her time of 1:55.30. That time is over a second faster than her winning time last season.

Nevada senior Kristina Schneider successfully defended her title in the 100 free, winning the event in 49.65. Unlike last year, Schneider dropped from her prelims time, holding off Mia Ryan’s 2nd-place 49.71, marking just 0.06 seconds between first and second. Kristina Friedrichs rounded out the podium with her time of 49.74, also within a hair’s breadth of first and second.

For the second time in the past three years, SDSU won the 400 free relay. The team of Ryan, Samantha Geyer, Kristina Murphy, and Thormalm posted a total time of 3:17.45, the fifth-fastest time in Mountain West history.

UNLV came in 2nd with a total time of 3:19.12, the tenth-fastest time in Mountain West history. The team consisted of Malia Fernandez, Katsiaryna Afanasyeva, Ava Haase, and Schneider.

In diving, Melissa Mirafuentes Santilla defended her platform title with a score of 328.20. The top 12 divers posted NCAA A-standard scores.

SDSU is invisible to kids from the San Diego area. What a wasted opportunity year after year. Club and High School kids never get a chance to swim at SDSU, or USD and UCSD for that matter. I have heard the reason is that they want to charge a fortune to use their facility. Facilities that taxpayers paid for. If kids got a chance to swim in the college pools at some point they may consider swimming there.

do you mean the pools are invisible?

4 swimmers/divers are from San diego on the current roster and 13 total are from california. That is more than half the team. Know swimmers who never swam in college pools and are swimming in major D1 programs.