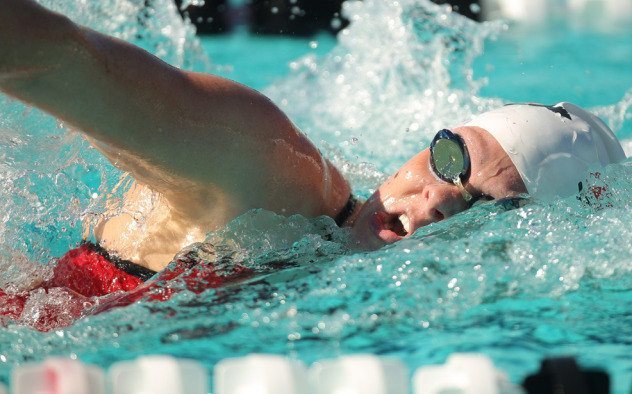 CORVALLIS, Ore. – San Diego State swimmers won 10 of 12 individual races as they defeated Oregon State, 139-113, Friday afternoon at OSU’s Osborn Aquatic Center in Corvallis, Ore. The win was the fifth straight for the Aztecs, who improved to 5-0 on this season.

Friday’s meet consisted of 12 individual races and pair of relay events. Diving was not contested as the Beavers do not field a diving squad.

Martina Marks got things underway for San Diego State with a first-place finish in the 1000 freestyle in a time of 10:29.51. Teammates Cori Casper and Madeline Garcia finished second and third receptively as the Aztecs took the scoring lead for good after placing second in the 200 medley relay by .22 second to begin the meet. Marks would later capture top spot in the 500 freestyle in 5:09.06.

Harrison was victorious in both the 100 and 200 butterfly events with times of 56.21 and 2:08.31 respectively. The 100 fly was the second of two races in which SDSU swept the top three spots as Courtney Vincent (58.38) and Samantha Guttmacher (58.62) placed second and third behind Harrison.

The San Diego State swimmers will remain in Corvallis where they will compete against Oregon State in another dual meet on Saturday, Nov. 5, starting at 10:00 a.m. (PT).

The Beavers scored in the first event, after they took first place in the 200-yard medley relay with a time of 1:45.49—.2 seconds ahead of the Aztecs. The relay is made up of Felicia Anderson, Corrine Shigeta, Andrea Young and Sophie MacEwan.

Junior Corrine Shigeta placed second in the 100-yard breaststroke with a time of 1:06.19, while senior Chelsea Chan followed with a mark of 1:08.08.

Senior Sophie MacEwan recorded a second place finish in the 50-yard freestyle with a 26.23 time, just .23 seconds behind the leader.

Shigeta and Chan also finished second and third, respectfully, in the 200-yard breaststroke.

Oregon State will face San Diego State and SWOCC tomorrow at Dixon starting at 11 a.m., before having almost a month off until it travels north to Washington for the Husky Invite December 2-4.