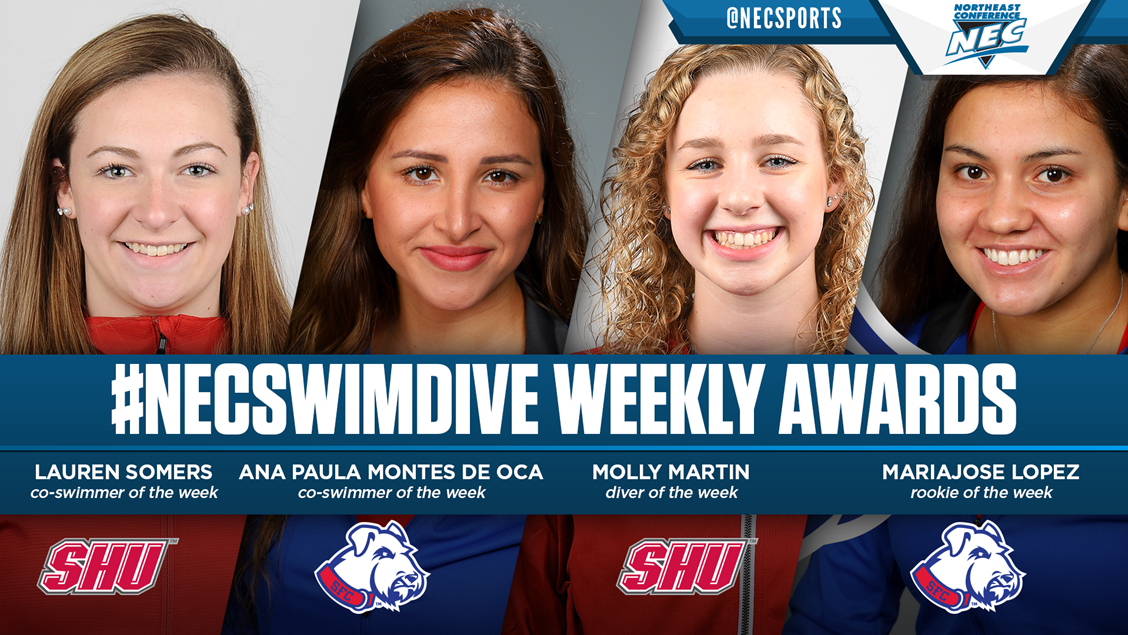 Andrew Innerebner has verbally committed to swim for the University of Wisconsin Milwaukee for fall 2020. Innerebner will be joining their class of 2024.

NEC CO-SWIMMERS OF THE WEEK
Lauren Somers, Sacred Heart
Sr., Hudson, NH/Alvirne
Somers dominated the freestyle events at the Fairfield Invitational last weekend, claiming gold in the 50, 100, and 200 events as well as anchoring a come-from-behind win for the Pioneers in the 400 freestyle relay. The senior from Hudson, New Hampshire 50 free converted time of 24.68 is the best in the conference thus far.

NEC DIVER OF THE WEEK
Molly Martin, Sacred Heart
So., Royesford, PA/Spring-Ford Senior
Martin claimed both women’s 1-meter and 3-meter diving events at the Fairfield Invitational. The Royesford, PA product scored a 193.7 in the 1-meter and 221.84 in the 3-meter, an impressive 27.97 points over the second place finisher.

Central Connecticut junior Katelyn Mann (Pompton Plains, NJ) helped the Blue Devils to a win at Fairfield University, finishing first in the 100 breaststroke, second in the 200 breaststroke and fourth in the 100 butterfly.

Mount St. Mary’s sophomore Kira Buchler (Sanatoga, PA/Villa Maria Academy) kicked off her season by pacing the Mountaineers at the New England Catholic Invitational. She finished third in the 100 backstroke and  fifth in the 200 backstroke.

St. Francis Brooklyn sophomore Kayla McKenzie (Saskatchewan, Canada/Campbell Collegiate) won both the 1- and 3-meter diving events for the Terriers at the Brooklyn Invitational. She scored 206.75 in the 1-meter and 191.35 on the 3-meter board.

Sacred Heart freshman Kelly Bartnett (Bayonne, NJ/St. Dominic) claimed her first collegiate event win in the 100 backstroke at the Fairfield Invite with a converted time of 1:00.81. Bartnett also posted third place finishes in the 50 free and 300 free and was the second leg on the Pioneers’ winning 400 freestyle relay team.