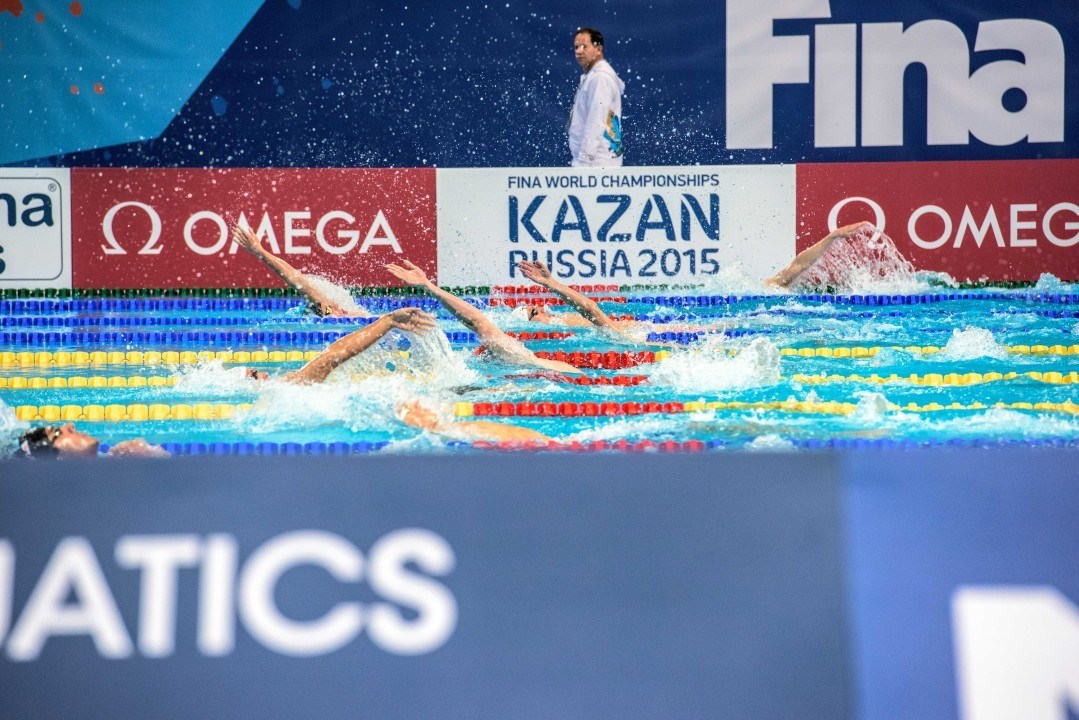 Russian swimmer Daniil Antipov feels as though athletes are being unfairly blamed for actions made outside of their control by the Russian government. Stock photo via Mike Lewis/Ola Vista Photography

Russian swimmer Daniil Antipov has spoken out on the recent call to remove international sporting competitions from the country amidst the ongoing invasion of Ukraine.

Antipov, who won three medals representing Russia at the 2015 World Junior Championships and previously competed for Grand Canyon University in the NCAA, says that Russian athletes ultimately should not be blamed for the country’s actions that are outside of their control.

Antipov at the same time says politics and sports are intertwined, but then says we should all butt out. He says that he does not believe Russian propaganda, but also tells everyone they should not be bothered by what’s happening.

“To begin with, in no shape or form am I a political expert, thus this post is not aimed to encourage people to take any sides but rather critically think and realize that politics is a grey area and NOT black/white,” Antipov wrote on Instagram.

“Yet, I will allow myself to speak on a topic with which I have been involved with for the last 9 years of my life – international sport. We all know that pure sport is supposed to be outside the boundaries of politics, however, nothing is pure and never will be and sport is not an exception.”

Antipov then responded to the “calls to action” made by several in the swimming and sporting community in recent days to remove events from Russia and potentially ban Russian athletes from competing.

“Undoubtedly, everyone has a right to have an opinion but we need to draw a line at a point where an opinion becomes an encouragement for hate and dirty looks on athletes of Russia,” Antipov said. “You state that not acting is equivalent to supporting war.

“What we as athletes can do I wonder? Go on the streets, publicly protest, and post it on social? That has happened after the last election in our country and what it led to? Or maybe we should ask biathletes and benchrest shooting athletes to bring out their pneumatic rifles to make it more convincing? Why do many athletes of my country, myself included have to feel shame for the flag that we represent and ask for forgiveness from somebody for the actions we absolutely have nothing to do with? Side note: we don’t even have our flag and hymn yet.

“No one in their right mind wills to witness what is happening right now, but I don’t want to be shamed for the soil where I was born and stomp my own flag.”

Another Russian swimmer, European Championship finalist Tatiana Belonogoff, shared Antipov’s sentiment in an Instagram comment on SwimSwam’s post featuring a snippet of an interview with Ukrainian swimmer Andrii Govorov, who called for Russian athletes to be banned from competing. Belonogoff said that “athletes aren’t to blame for the actions of the government.”

Shortly after Antipov made his comments public, the International Olympic Committee (IOC) urged sporting federations to pull events from Russia and Belarus due to the ongoing attacks.

FINA has also pulled hosting duties from Russia for upcoming water polo, diving and artistic swimming competitions, but has yet to move the World Junior and Short Course World Championships, which are both scheduled for Kazan later this year. FINA said that the events that weren’t canceled are “under close review” as they monitor the events in Ukraine.

So, after thinking critically you can’t see right or wrong. Tell the people of Ukraine that war crimes are a grey area. Russian athlete who wants the world to look the other way, go f— yourself.

Bold “sentiment” from someone that’s never even going to swim in the meets he’s running his mouth about. It’s honestly unbelievable that not only is he backing up Russia, but that he called the Ukrainian swimmer an idiot on top of that. Absolutely shameful, GCU should be embarrassed, hope his Ukrainian ex teammates are doing alright.

Disagree, if you don’t speak up and condemn the Soviet invasion then you are agreeing with it whether you are an athlete or anyone else. Every country should stop all competitions in Russia

How do you say “cry me a river” in Russian?

Wondering how NCAA coaches would be responding with recruitment of Russian athletes. Is winning worth what the poor citizens of the Ukraine are going through with the bombings and being displaced from their homes?

Interestingly, there were several Ukrainian swimmers on the GCU team when he was there. I imagine he has some loyalty to them so not sure where this is coming from. I think it’s more appropriate at this time to advocate for old teammates’ safety than where a few swim meets will be held. At least for the time being.

Comments from he and Russian/GCU teammate Mark Nikolaev are the same:

They are part of the propoganda machine that Russia has created and they don’t even know it. Mark posted something like “western media should stop posting provocation content.”

That’s the most Putin thing that I’ve ever heard.

I noticed Belonogoff’s posts were suggestive that her views on Donbas were aligned, at least to some degree, with the Kremlin’s bull**** misinformation too. Obviously there’s no mention of how or why LPR & DPR came about though.

Even if FINA doesn’t cancel the meets a lot of countries will probably boycott them anyway so it’d be better for them to be relocated. I really don’t see Australia sending athletes to a country that’s waging war against its neighbour and I hope other countries come to the same conclusion.

Not a great look for GCU !

It was such a highly rated school though