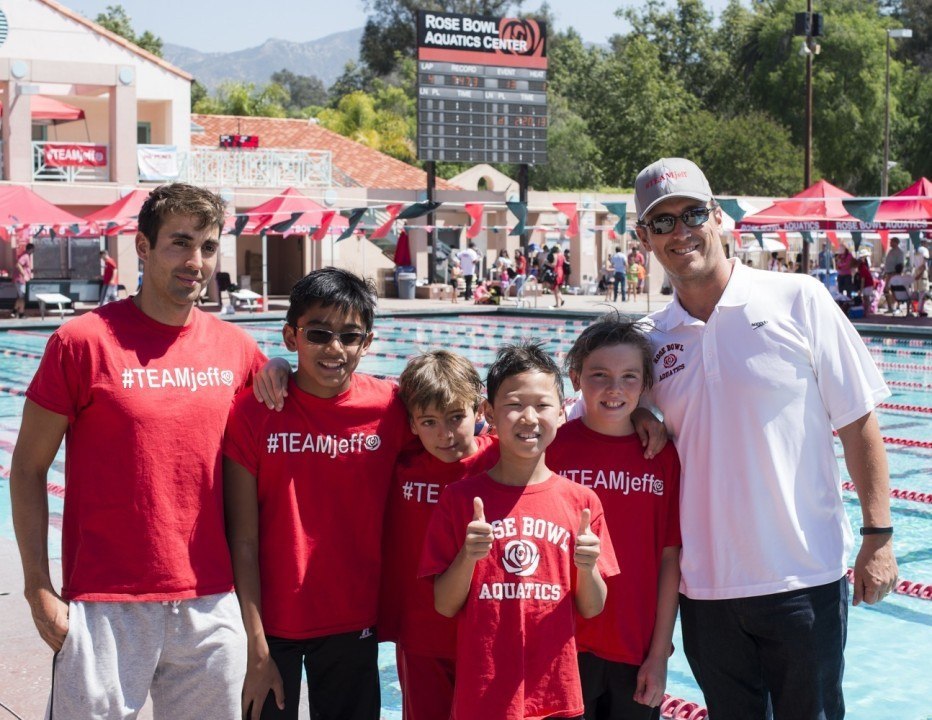 The Rose Bowl boys swam all alone in their heat on Friday evening in a short-course yards set-up. They had been .1 off the Southern California Swimming LSC record and had wanted to give it one more try before Dalmacio ages up later this month. Not only did they break the SCS record, but they cleared the NAG mark as well. Moreover, Dalmacio broke the NAG record in the 50 back by .74 in his leadoff leg, becoming the first 10-year-old boy in history to crack 27 seconds. Each of the other three went significantly faster than their previous best times:

The side-by-side comparative splits are:

Should this even count? It’s an intrasquad meet with no other competition in the pool. I don’t know the rules about things like this, but doesn’t seem like a “natural” occurrence. Those are huge drops with no competition swimming next to them.

I don’t know if you read their previous best times, it’s not so much of a huge drop. Seems like these kids were just swimming to get their goal times, and they did. You don’t need someone to be physically racing next to you to push yourself to be faster. They were just aiming for an LSC record but also rewarded a NAG all because they know how to race. That to me shows maturity considering they are kids. More power to these young athletes.

If anything, I think swimming by yourself is a detriment because you have no way to gauge how fast you are going. Jack Conger set the American record in the 200 fly this past February at a time trial. That time trial wasn’t a “natural occurrence” but it still counted. As long as the pool is regulation length and the swimmers swim legally, I don’t see why records shouldn’t count. Congrats to these young men!

thanks. I’m nathan Kim little kid with the thumbs up. People say that it should’nt count but thanks a lot