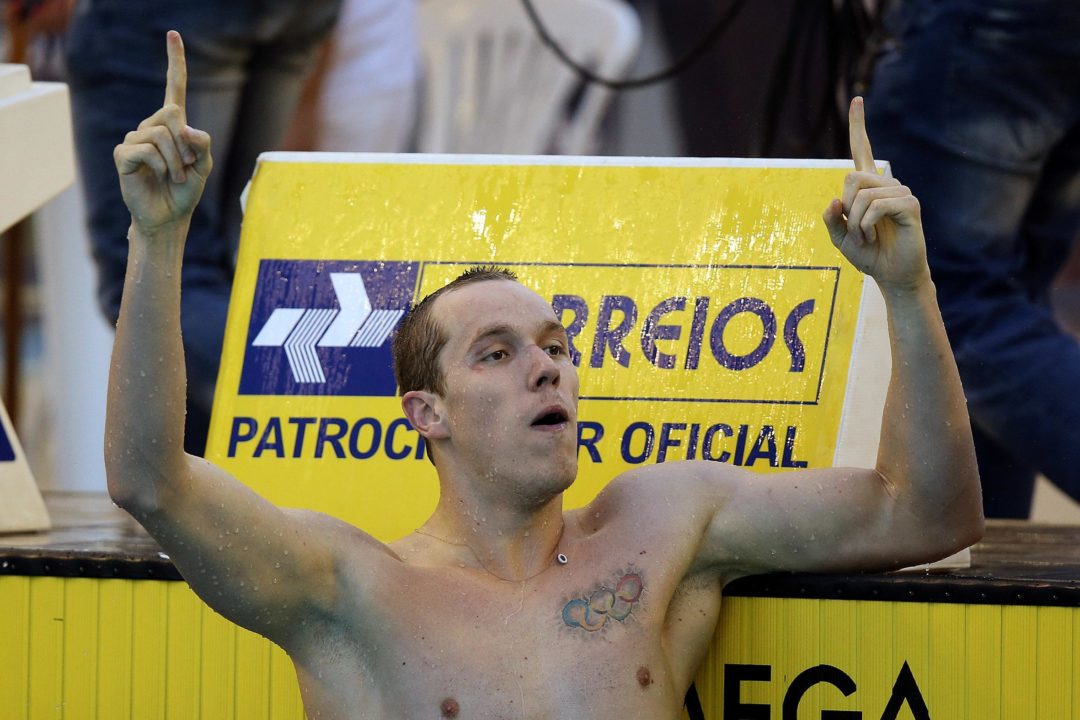 Henrique Rodrigues upset Thiago Pereira in the men's 200 IM, as the pair now ranks 2nd and 3rd in the world in 2013. (Photo:Satiro Sodre/SSPress)

Outside of the sprint events, Friday in Rio at the 2013 Maria Lenk Trophy saw by far the best performance of Brazil’s National Championship meet, and second round of World Championship qualifying.

There, in the men’s 200 IM, Henrique Rodrigues from Pinheiros and Thiago Pereira from SESI locked toe-to-toe, and in what has to be classed as an upset, Rodrigues won in 1:57.37, with Pereira 2nd in 1:57.48. Both times are easily good enough for the World Championships in Barcelona. Those times rank them 2nd-and-3rd in the world this year, respectively, making Brazil stunningly home to easily the best 1-2 200 IM punch thus far in 2013.

In the men’s 50 fly, what seemed like an upset, but in reality probably wasn’t Nicholas dos Santos won the 50 fly in 23.05, followed by Cesar Cielo in 23.16. Those both rank in the top 5 in the world in 2013. Cielo is the defending World Champion in the event, though with his lightning-fast start and pure strength, the 33-year old Dos Santos has every tool to take that title this year.

Interesting to note: three of the top five-ranked swimmers in the world so far in this 50 fly this year are Fred Bousquet (32), Dos Santos (33), and South African Roland Schoeman (32). It would be an impossible task to prove, but one would imagine that this is probably the first time at any significant point in swimming history that three of the top five in the world in any given event were 32 or older.

The 400 freestyles were fairly underwhelming. Carolina Bilich won the women’s race (another victory for Minas) in 4:14.99, followed be Ana Marcela de Jesus in 4:15.60. Another Dutch swimmer, Federike Heemskerk, was 3rd in 4:16.48.

The men’s race was a little better with Argentine Juan Pereyra the official champion in 3:54.10, followed by Marcos Oliveira in 3:54.26: both representing Minas as well. The fastest overall time of the day was Martin Naidich, another Argentine, in prelims with a 3:52.66. After breaking South American Records earlier in this meet in the 800 and 1500 freestyles, he couldn’t hit his best time in this 400.

isn’t manadou been faster than schoeman this year?

It’s much easier for older swimmer to swim close to their PBs or even surpassed their PBs in the 50s, then say, in 100s or 200s.

I don t know why, but in fly events that happens a lot.I remember the Worlds of 2005, when Fernando Scherer made his South American record(at that time) of 23.55 in the same race Schoeman beat WR with 22.96.Later in that World champs, he made only 22.8 in 50 free…

Cesar Cielo was more than a half meter behind dos santos after start…incredible recuperation in his swim phase, but without his famous start, it will be tough for him to fight for gold in free and fly.

It’s perhaps the start of Nicholas Santos which is very very very impressive. I remember his 50 fly race at the last short course world championships. His start was incredible.
http://www.youtube.com/watch?v=9WE9NpDG4lM

But when I see Chad le Clos so close to the win in short course, I think he will be very tough to beat in long course next summer in the 50 fly. I predict a triple win on butterfly for him in Barcelona.

This is not related to Fly but

Just Hope this was not a Typo by the site..

That’s such an amazing time.

IIRC, Yolane Kukla also swam similar times when she was 14, but then again, Kukla was a gymnast before she switched to swimming, so she was developed earlier and had great strength already.

bobo,
dos santos has a great start.But, at his best, Cielo is still better(prior Maria Lenk and PanPacs can prove that).In 50 free his start was amateurish, without his strong leg kicks after start(what always make him jump ahead of the field in the breakout).

The site corrected it to 59:11! Amateur Work by them Already sent them a print I took..

Putting a Cielo there you might actuallly have a reasonable relay..

If they put Cielo in the prelims and if he’s healthy enough for the distance, they can for sure make the final.

If Cielo can go 48 low again, the may even be in the hunt for a medal.

If Cielo can.. he and Chiereguinni might be good enough to break 48.. but the other 2 would need to be able to go 48 low on relay start for having any chance..

Cielo said himself that he were to swim Maria Lenk.. His new club did a misentry not putting him on 100.. on 2 weeks we will Brazilian Champs.. he will for sure swim there..

Well, if the Brazilian coaches are looking: please put Cielo in the prelims! there’s no reason to rest him (unless he’s really hurt, but that 50 free he looked good) and that will be a sure bet to make the final! Don’t make the same mistake in 2011 & 2012. maybe a medal is a long shot, but it will be a good step for Rio.

Philip,
i will not put Cielo in ANY 100 free(relay or individual).If you look at his start(50 free and fly), you will see he is strugling to do a good one.It will be a big mistake.