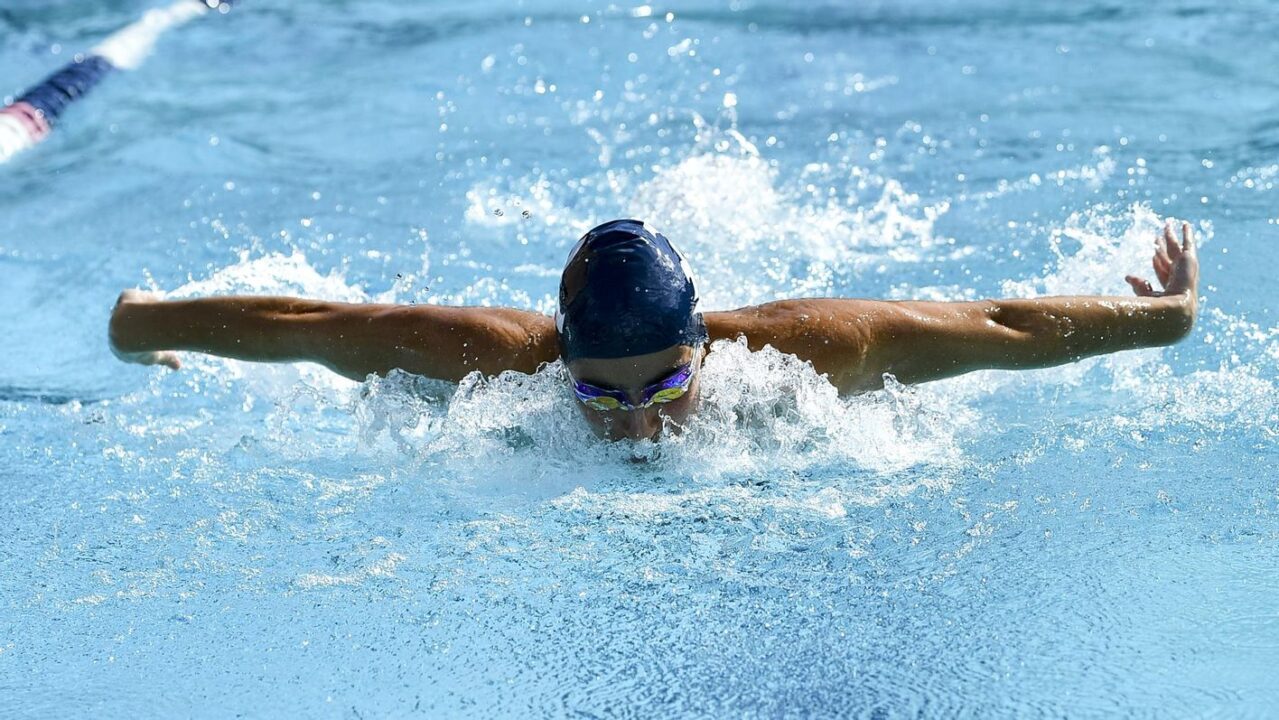 Rice's Arielle Hayon broke 23 seconds for the first time in her career in the 50 free, winning in a time of 22.92. Current photo via Maria Lysaker/Rice Athletics

HOUSTON – The University of Houston Swimming & Diving program won two events after the opening day of action at the Phill Hansel Invitational on Thursday at the CRWC Natatorium.

Freshman Eden Humphrey placed third in the 500-yard freestyle clocking in at 4:49.85. Landry Hadder took first place in the consolation final with a time of 4:55.48.

The Cougars continued to pick up additional points in the 50-yard free consolation final with Jenna Kerkman taking second with a time of 23.58 in the event.

Houston earned second place in its final relay of the evening as Meuter, Henrietta Fangli, Abbie Alvarez and Emma Wright combined for a time of 3:42.36.

All six of Houston’s competing divers qualified for finals with the first three places held by the Cougars. Sophomore Josie Graves finished the 1-meter in first place with a final score of 293.20 and earned a zone cut. She was followed by Hedda Grelz (287.95) in second and Emilia Waters (283.50) in third. Katie Deininger (269.95) and Jolie Blodgett (269.05) placed fourth and fifth.

SUPPORT HOUSTON RISE
Join Houston Rise, a $150 million fundraising campaign for Houston Athletics dedicated to championship success in the Big 12 Conference. Every Houston Rise contribution prepares our Cougars to compete and win when we start Big 12 competition in July 2023. Click here to rise and be counted.

In Brief: Zoe Spitz broke the school record in the 100 back while Arielle Hayon and Lauren McDougall posted personal bests while capturing individual events and leading the Owls to a pair of relay wins on Day One of the Phill Hansel Invitational at the University of Houston’s CRWC Natatorium on Thursday.

Seth Huston: “Strong performances today, led by school record backstroke lead-off on the 400 MR by Zoe Spitz. Lauren McDougall won gold over teammate Ella Dyson in the 500 free–both lifetime best performances–along with two relay victories and a runner-up to Arielle Hayon, in the 50 free.  I was overall, pleased with the team’s energy and performance today. I feel like too many team members are expecting too much of themselves and could relax just a bit and really embrace each race as it happens. I am looking forward to seeing how we adjust going forward.

Up Next: Action resumes at 10 a.m. on Friday with preliminaries in the  400 IM, 100 Butterfly, 200 Freestyle, 100 Breaststroke, and 100 Backstroke.  Finals for those events in addition to the  200 Medley and 800 Freestyle Relays will begin a 6 p.m.   There is no admission charge to attend the competition.

Tune In: Friday’s finals will be streamed live, beginning at 6 p.m.