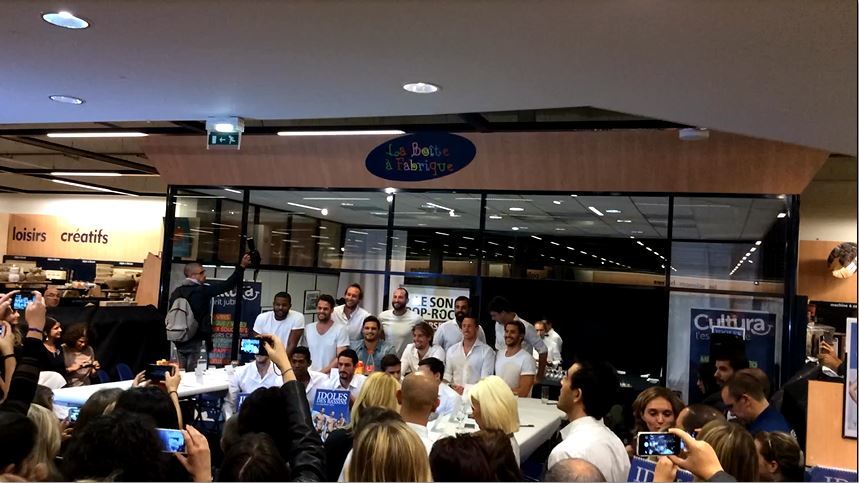 When swimmers are treated like rock stars: autograph session for the release of the "Idols of the Pool" calendar in France. Current photo via Anne Lepesant

After 15 years of a monopolistic run by France’s national rugby team as the kings of calendar sales with their “Gods of the Stadium” bestseller, there’s a new challenger in the game: the “Idols of the Pool.”

Last month the teaser “making of” video was released, and now the calendar itself is on shelves in bookstores in France. The calendar features the swimmers of the Cercle des Nageurs de Marseille, the home club of most of France’s national men’s team, such as Florent Manaudou, Camille Lacourt, Frédérick Bousquet, Fabien Gilot, Grégory Mallet, and Mehdy Metella, shot at the famous club that juts into the Mediterranean Sea.

On Thursday night, the 14 men featured in the (somewhat racy) calendar, and their coach Romain Barnier, were on hand at a store in Marseille to meet fans and autograph calendars. In addition to the swimmers listed above, fans saw William Meynard, Giacomo Perez Dortona, Benjamin Stasiulis, Clément Mignon, and Axel Bouton, as well as the up-and-coming Théo Bussière, Anthonny Ralefy, and Paul-Gabriel Bedel.

An impressive crowd of calendar-buyers showed up, many of whom came several hours early to queue for tickets to enter the signing area. The swimmers arrived at 7:30, and autographed calendars and took fan selfies until 10:00 p.m.

Fortunately, SwimSwam was there to capture a few images.

There were not many left at the end of the night

Fans lining up to get their calendars signed

The view from the back of the room

I imagine what Leveaux thinks about that. 😆