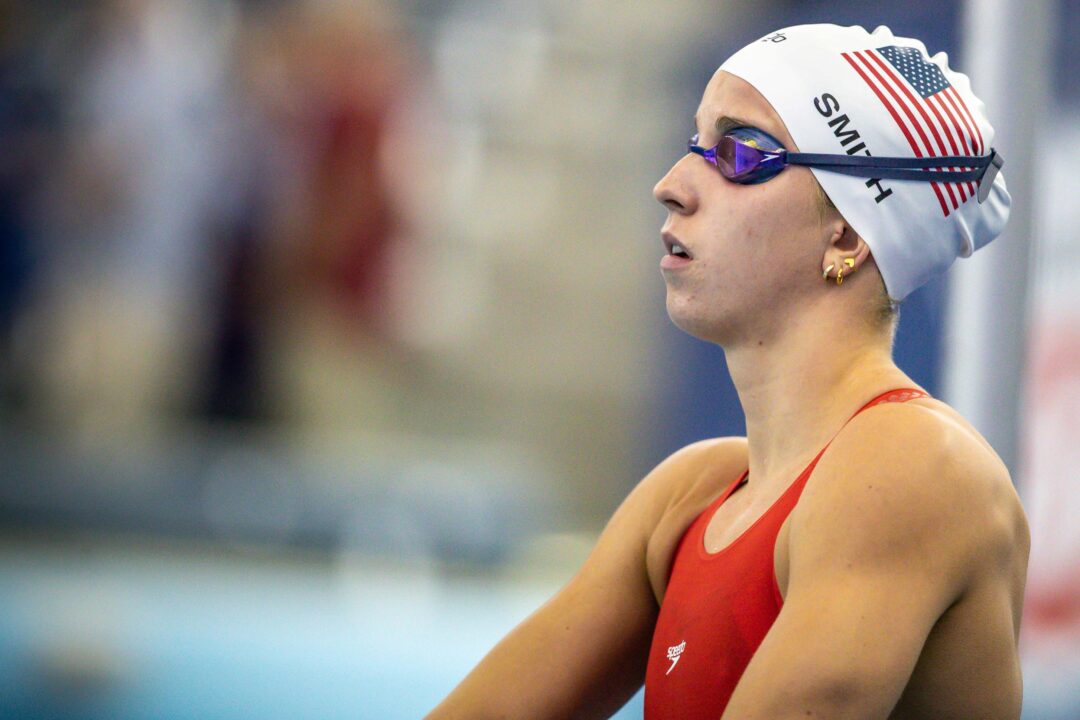 In her first national-level meet since joining Bob Bowman's pro group at Arizona State, Regan Smith has already clocked a PB by over a second in the 200 IM. Archive photo via Jack Spitser/Spitser Photography

In the prelims of the 200 IM at the U.S. Open Championships this morning, Regan Smith clocked a personal best time of 2:11.66 to take the top seed going into tonight’s final.

Smith’s swim marks a 1.48 second drop from her previous best of 2:13.18, which she set at the Des Moines stop of the TYR Pro Series in March of 2020. Most of her improvement came from her breaststroke leg, as she was nearly a second and half faster on that 50 alone.

Smith announced this past August that, after one year at Stanford, she was forgoing the remainder of her NCAA eligibility to turn pro and join Bob Bowman’s group at Arizona State University.

This is the first national level meet we have seen Smith compete in since making the move to Bowman’s group. This swim is a good indicator that Smith has transitioned well into Bowman’s training and is already seeing benefits from the move just a few months in.

Bowman’s pro group has recently expanded drastically with the additions of Smith, Chase Kalisz, Jay Litherland, Simone Manuel, and Sierra Schmidt. Kalisz is the only other Sun Devil newcomer that we will see in action this weekend.

Bob’s gonna turn her into a 400 IMer lol

Regan should try the 400IM too

Regan is amazing. I remember watching her swim the 200 back at 2019 worlds on tv and seeing her go 2:03 was jaw dropping. My youngest daughter was like “I wonder if she will break the WR in the 100 now?” Sure enough she did 57.57. Her fly/back is impressive, and now IM. Love watching her swim, she’s so inspirational

I don’t think they’re saying she will make the team, just noting that her IM is impressive.

Regardless, it took a 2:12.5 to make semi-finals and 2:11.5 to make finals at Olympic Trials. Top-2 swimmers swam 2:09 to make the team. It’s tough to say she can’t be in the conversation when she’s on the cusp of finals with a preliminary PB at a mid-season meet.

ALSO… I think there’s a conflict with the 200 fly if I remember correctly.

8 hours later, and this comment did not age well. She did indeed drop a 2:10!

I’m expecting her to swim faster in finals too! Maybe 2:10??

Bob Bowman is him

If she can only improve her breaststroke a little more, she would be among the elite IMers.

Breaststroke – the bane of great 3 stroke IMers down through the ages.

Regan Smith could absolutely, 100% be an incredible 200IMer. She is world class on the front half, and has shown that she also has an excellent freestyle. 30.62 is world-class. I’m sure she would never put full focus into training for this event, but if she could get that breastroke under 40 and clean up a few things across the other 3 strokes, plus a good taper, she could be 2:08 low-mid.