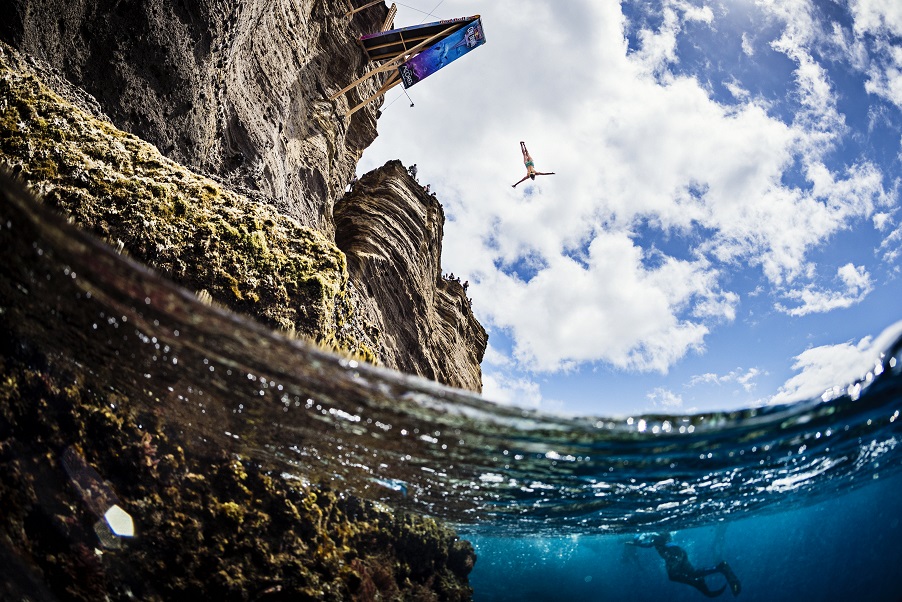 On June 22, the world’s best cliff divers return to the the visually stunning volcanic island in the Portuguese Azores for the 8th year in a row. Current photo via Red Bull Media Library

When bare feet rise from the rocks, the world’s best cliff divers return to the World Series’ most classic location on the visually stunning volcanic island in the Portuguese Azores for the 8th year in a row. Current leaders and last years’ champions Gary Hunt (GBR) and Rhiannan Iffland (AUS) aim for the victory at the fourth stop 2019, while Andy Jones (USA) and Yana Nestsiarava (BLR), both in second position in the standings, are eager to break the dominance.

Record-smashing Iffland can make history in her 21st appearance in the World Series. The 27-year-old Australian holds all the trumps to secure her 4th victory in the season’s 4th event from 21m, something no other female athlete has yet achieved in this sport. So far, the remaining podium spots have been divided between Yana Nestsiarava from Belarus and Canada’s Lysanne Richard with a second and a third place each, as well as 2018 runner-up Adriana Jimenez (MEX) and the new face on the podium in Italy, Maria Paula Quintero (COL). If anyone is to topple the dominant Australian, it’ll most likely be one of this foursome.

Supreme acrobatic skills will also be required in the men’s to stir up the standings halfway through the season, with the added challenge of dealing with the open ocean. While Britain’s Hunt is the most successful athlete in this majestic location with three wins, the 35-year-old hasn’t tasted victory in the previous two Portuguese competitions.

With Hunt’s supposed biggest rival, Constantin Popovici from Romania, not starting in Portugal due to injury, the door is open for an invigorated Andy Jones (USA), whose 2nd place in Italy moved him up to the same rank in the overall standings ahead of Poland’s Kris Kolanus. 2017 champion Jonathan Paredes (MEX) and World Series veteran Michal Navratil from the Czech Republic, are fired up for their first season win following their podium finishes this season.

The tiny volcanic Islet of Vila Franca do Campo has been the setting for plenty of drama in seasons gone by, and the stage is set for more excitement on the ‘Princess Ring’ as this nature reserve is called by the locals. Almost circular in shape but broken by a sea entrance through one
section of its perimeter, the phenomenal visuals of this venue in the middle of the Atlantic Ocean will be the backdrop not only for the sport’s elite but also some fresh faces and upcoming talent.