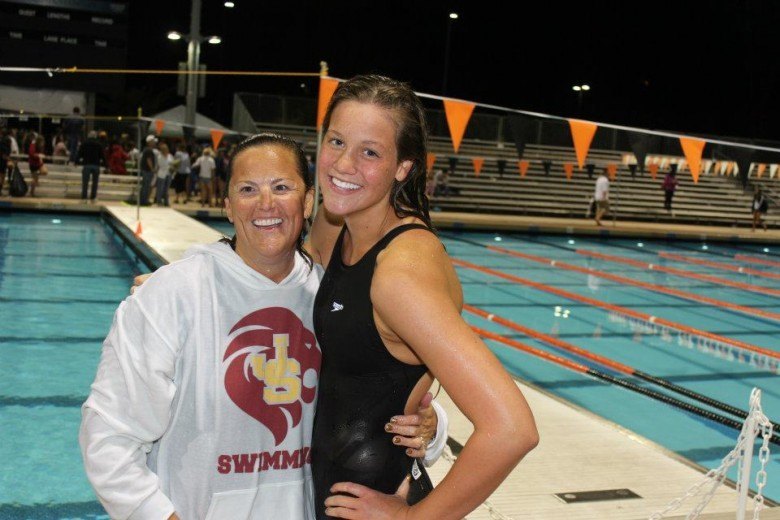 Rebecca Millard from JSerra High School and Irvine Novaquatics in California has verbally committed to Texas. Millard is currently taking a gap year before committing, so she’s actually a member of the class of 2013.

“I decided to become a longhorn because of the phenomenal coaching staff, close team, great academics, athletic support, and the overall atmosphere of the school,” Millard said. “It was honestly the whole package! I knew after walking on the campus for just a few short hours that it was the place where I could become the best version of myself! Can’t wait to be a part of the program next year! HOOK EM!”

And so Carol Capitani continues to load up on a class deep with freestylers, which they’ll need in order to replace a very good senior class of freestyler after this season that includes Sam Tucker, Alex Hooper, Sarah Denninghoff, and Ellen Lobb. Looking at their 2012-2013 roster, out of the 10 best flat-start 100 yard freestylers, only one (Gretchen Jacques, who will be a senior) returns next fall.

“I decided to do a gap year because I knew there were more options out there and a lot more doors had opened up to me,” Millard said. “It was a risk, but it is definitely worth it looking back now.”

She’s spending the year working a little bit, and taking a few classes, but says she’s mostly focused on swimming and getting ready for college.

She swam at JSerra for Mary McLaughlin, and at Novaquatics trains under Adam Crossen.