Reaney, McCrory Each Grab 4th ACC Swimmer of the Week Honors of 2013-2014 Season 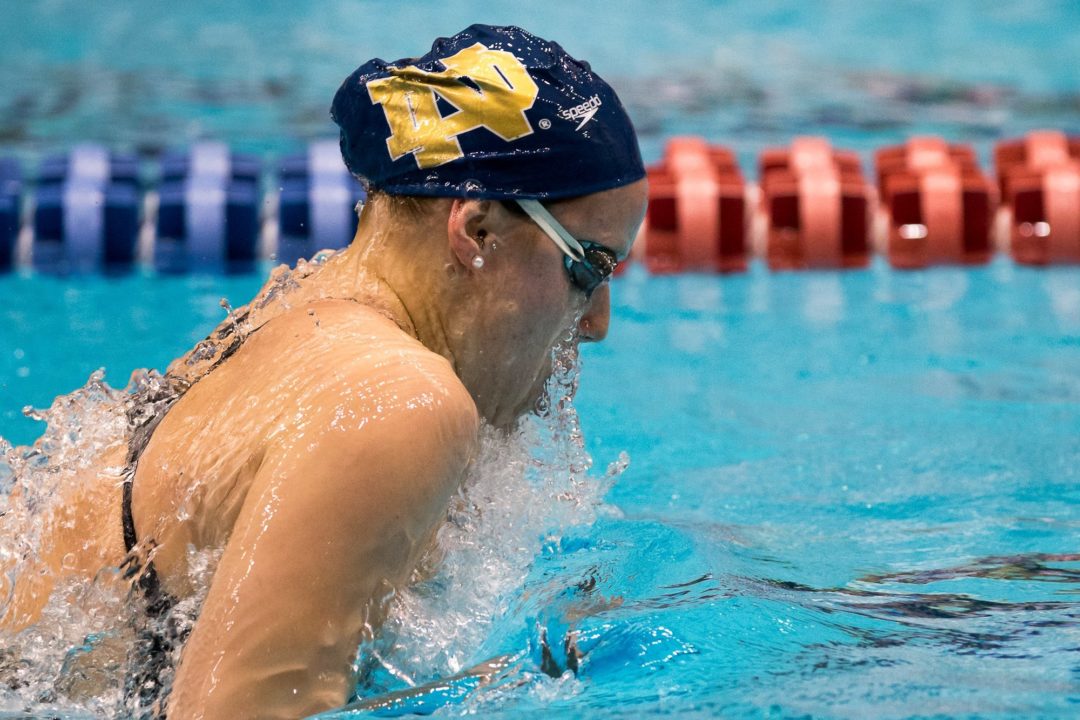 Emma Reaney and the Notre Dame women will be a huge factor at the 2014 ACC Championships. Archive photo via Tim Binning/TheSwimPictures.com

Notre Dame’s addition to the ACC for the 2013-2014 swimming season was undoubtedly going to have a significant impact on the conference’s balance of power.

But the Fighting Irish have greatly accelerated a process in a conference that already looked like it was heading for a balancing of power at this year’s championships, after 6 straight Virginia titles. A big part of that rebalancing of power comes in the form of a single swimmer: Emma Reaney.

Reaney on Tuesday was announced as the ACC Women’s Swimmer of the Week for January 14th, marking her 4th time with that honor this season already.

Reaney took dominant wins in the 100 breaststroke (1:00.77), 200 breaststroke (2:14.09), and 100 fly (54.92) in the team’s quad meet with Northwestern, Michigan, and Rutgers over the weekend in Evanston. She won those first two races by roughly three-and-four seconds each, even against a very good Michigan breaststroker Angie Chokran, and took the 100 fly by just over a second.

The Irish junior All-American was also a part of the team’s winning 400 free relay, posting the Irish’s fastest split of 3:25.15.

While that swimming balance is shifting, the men’s diving balance is staying largely the same. Namely, Duke senior Nick McCrory keeps on winning, and his winning has earned him a 4th ACC Diver of the Week award this year.

McCrory has not lost this season (7-0) and swept the springboard events against South Carolina over the weekend. He will get some competition from out west on the platform at NCAA’s this year, which should be an incredible battle, but McCrory has a shot at sweeping the diving events in March.

Logan Heck of North Carolina takes home the ACC Male Swimmer of the Week award. In a dual with Navy last weekend, he took individual wins in both the 50 (20.40) and 100 (45.47) yard freestyles, though he was fought close in both races, and also grabbed two relay wins as the Tar Heels rolled the Midshipmen.

He was one of two Tar Heel aquatic athletes honored by the conference; Kelly Corish won women’s Diver of the Week by sweeping the 1-meter and 3-meter events as the UNC women’s only entered diver against Navy.