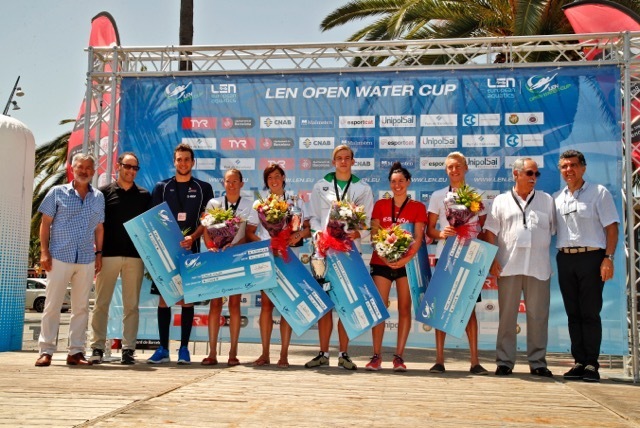 Hungary’s Kristof Rasovszky won his second race in the season, just as in last year he came first in Barcelona, ahead of France’s world champions Marc-Antoine Olivier and Axel Reymond. Current photo via LEN Media

Hungary’s Kristof Rasovszky won his second race in the season, just as in last year he came first in Barcelona, ahead of France’s world champions Marc-Antoine Olivier and Axel Reymond. Italy’s Aurora Ponsele won the women’s competition, ahead of Spain’s Paula Ruiz Bravo and another French world champion Aurelie Muller.

The LEN Open Water Cup should be Kristof Rasovszky’s favorite playing ground, so to say, since his winning ratio stands at 7/7, including last season when he clinched the overall title with rarely seen dominance. This year he won in Eilat, skipped Gravelines but was back in Barcelona where he retained his title with another convincing performance.

This time he was challenged by two French greats who excelled a year ago at the World Championships. Together with Marc-Antoine Olivier (gold medalist in 5km and Team, bronze in 10km) and Axel Reymond (25km champion), Rasovszky broke away from the pack in the last lap and he was the one who prevailed in the grueling finish, gaining a body-length on Olivier.

The women’s race wasn’t less exciting either, here Italy’s Aurora Ponsele managed to go in front at the end and she could touch in first, a second ahead of Spain’s Paula Ruiz Bravo. In the grand tussle for the bronze France’s 10km world title-holder Aurelie Muller used all her experience to capture the medal. Spain’s Olympic and world champion pool swimmer (over 200m fly) Mireia Belmonte made another test in the open water racing, this time she finished 12th.