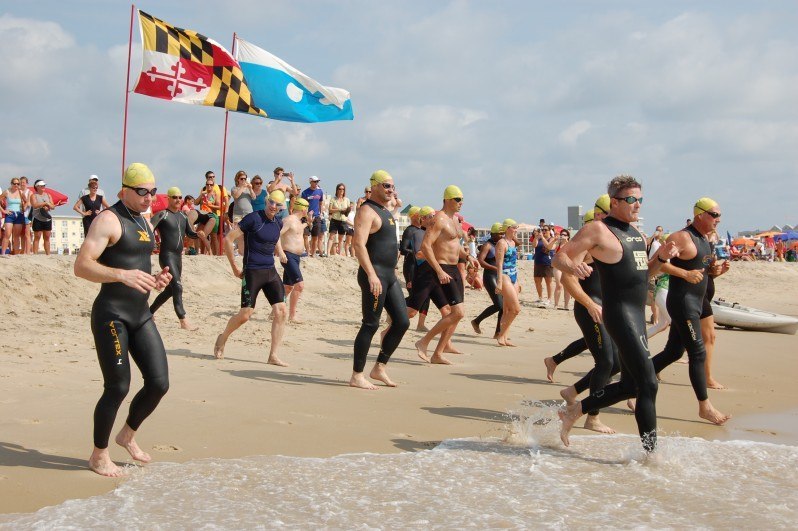 When a motorcycle accident in 2007 left founder and race director Corey Davis with a traumatic brain injury, rendering him unable to walk, the Johns Hopkins Brain and Stroke Rehabilitation Program became his hope. Current photo via Mike Lewis/Ola Vista Photography

The beautiful beaches of Ocean City, Maryland will be offering more than just sunshine, golden sand and surf this summer. On Saturday, July 18th, 2015 the Ocean Games will be hosting its 3rd annual swimming and paddleboard competition. Featuring 1, 3 and 9-mile ocean swims as well as 2 and 4-mile elite and open paddleboard races, the event hopes to provide “the ultimate ocean experience for novice and elite athletes alike”.

But that’s not the only goal for the Ocean Games. When a motorcycle accident in 2007 left founder and race director Corey Davis with a traumatic brain injury, rendering him unable to walk, the Johns Hopkins Brain and Stroke Rehabilitation Program became his hope. After six months of treatment, Corey’s determination and the efforts of the Program allowed him to stand on his own two feet again – a remarkable recovery given previous predictions that he would be wheelchair-bound for the rest of his life. Today, Corey regularly races in triathlons, half marathons and long distance swimming events. To give back to the program that helped him return to his previously active lifestyle, Corey conceived the idea of a swimming event, to be held in his native Ocean City, which would simultaneously raise funds for the Johns Hopkins program, increase awareness of traumatic brain injuries and recovery, and promote the positive effects that sports have on the brain and the body. Since its debut in 2013, the Ocean Games raised over $49,000 for Johns Hopkins and attracted participants from across the East Coast. Says Hopkins Brain and Stroke Rehab Program director Dr. Kate Bechtold, who has worked with Corey Davis since the first year of his injury, “…with the support of individuals like Mr. Davis and the Ocean Games, we can continue to raise awareness about brain injury and the potential impact it can have on individuals and their families life-long.”

Beyond the worthy mission of the Ocean Games itself, the events themselves offer a unique opportunity. While the stand up paddleboard race is currently the only such ocean-based event of its kind in the state of Maryland, the 9-mile ocean swim portion of the race is equally exclusive, constituting one of the few ocean-based marathon swimming events offered on the entire East Coast of the United States.

Joining the 9-mile swim this year will be veteran marathon swimmers John Humenik and Dr. Rondi Davies, characterizing the Ocean Games’ openness to both novices and seasoned athletes alike. Offering something for everyone, the event allows for the perfect open water experience in a safe and structured environment. “This is a wonderful opportunity for people to challenge their abilities in open water, and bring awareness to traumatic brain injury while promoting the positive effect sports have on the brain cognitively,” enthuses Corey Davis. “Hope you’ll join us!”
Join the Ocean Games team this July for a competitive and fun day at the beach in support of a great cause. For more information and to register, please visit: www.oceangamesusa.org

intetesting in volunteering
Thanks

Skip, thank you so much – we’d love to have you on our volunteer team! Please get in touch with Jenny at [email protected]

Thanks for this great article. The event sounds awesome!!!