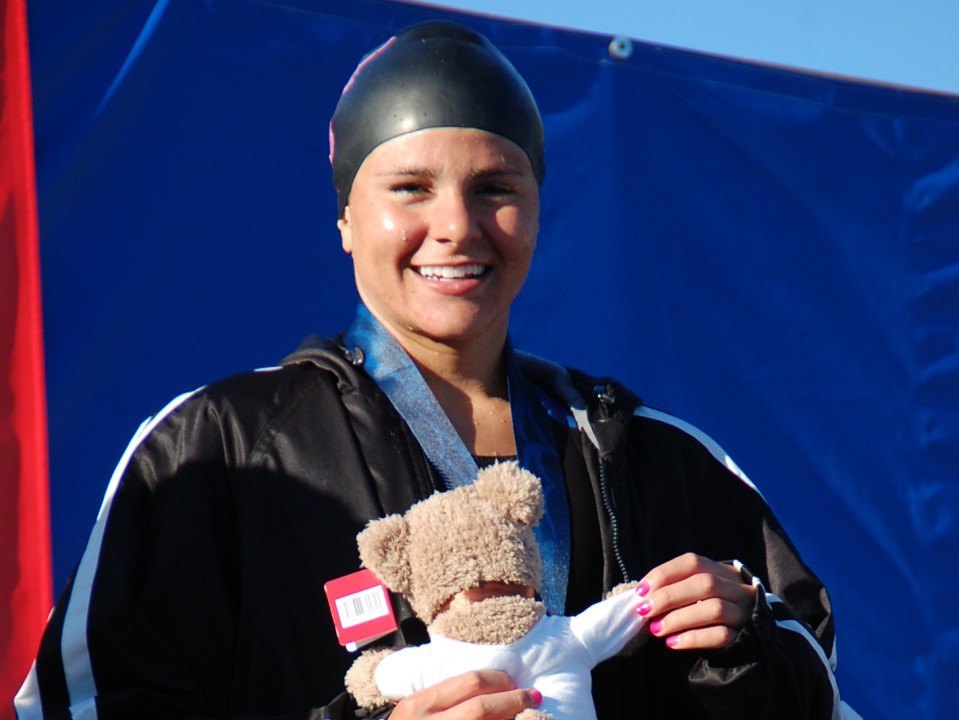 The Arizona Wildcats have received a verbal commitment from Longhorn Aquatics' Quinn Carrozza to join the recruiting class of 2015. Archive photo via Anne Lepesant

We aren’t even out of August yet and already University of Arizona head coach Rick DeMont has lined up three outstanding verbal commits in Sam Senczyszyn, MacKenzie Rumrill, and now Quinn Carrozza. Carrozza gave a verbal commitment to the Wildcats on Saturday, August 30.

The Austin, Texas native is best known for her prowess in mid-distance freestyle events. Carrozza won the 200 meter free at the 2013 Junior Nationals in Irvine with 1:58.31, narrowly missing Lea Neal’s meet record. Carrozza won bronze medals in both the 200m and 400m free, and a gold as a member of the 800 free relay, at 2013 FINA World Junior Championships. Last fall she competed as a member of USA’s 2013 FINA 18 and Under World Cup Team in Tokyo and Beijing, where she was the highest-scoring American in the SCM 200 and 400 freestyle events.

Carrozza went 1:46/4:46 in the 200/500 SCY free at Sectionals in College Station in February, which are only about 1.5/4 seconds off what it took to make top-16 at NCAAs this year. Her fastest 500 is a 4:40.0 which would, in fact, have made the consolation final at NCAAs. She’ll be a candidate for taking over for Arizona’s All-American Bonnie Brandon, who will be a senior when Carrozza is a freshman.

Carrozza may also be called upon to fill some of the holes on the relays created by the loss of All-American Margo Geer to graduation. Geer, who scored 36 individual points for the Wildcats at 2014 NCAAs, was a member of all five of Arizona’s scoring relays. In addition to her 200 free, which should have immediate impact on the 4×200 team, Carrozza has a solid 100 (50.7).

The addition of Quinn Carrozza to the Wildcat lineup is a nice get for Coach DeMont and his staff. His first season is shaping up to be quite successful on the recruiting front. As they start to add depth to the bench, the Wildcats look poised to develop an increasingly stronger program that should pay dividends for years to come.

Very sorry Quinn is leaving Austin. I always hoped she would be a Longhorn. We enjoyed having her as part of Nitro for a year. I remember she (tried) to give a speech to Nitro swimmers day before TAGS meet right after the last Olympic Trial, and could not talk how much nervous and shy she was. Very sweet person. Good luck to her.