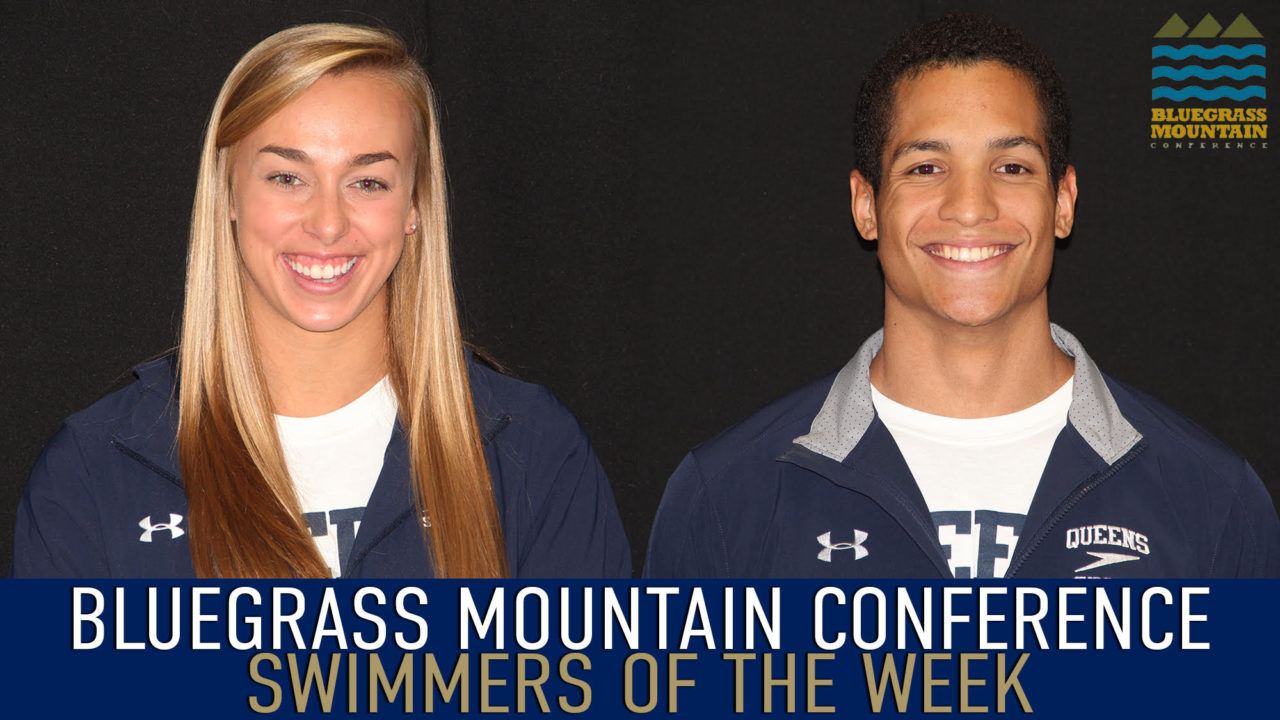 Queens University of Charlotte swimmers Paul Pijulet and McKenzie Stevens have been named the Bluegrass Mountain Conference Male and Female Swimmers of the Week, as announced Tuesday. Current photo via Queens Athletics

Queens University of Charlotte swimmers Paul Pijulet and McKenzie Stevens have been named the Bluegrass Mountain Conference Male and Female Swimmers of the Week, as announced Tuesday.

The seniors led Queens in competition this past weekend against NCAA Division I programs Liberty University, Virginia Military Institute and Virginia Tech in the Virginia Tech Spring Challenge.

“Both Paul and McKenzie had excellent meets versus Division I powerhouse Virginia Tech,” said Queens Associate Athletic Director for Strategic Planning and Leadership Development/ Director of Swimming Operations Jeff Dugdale. “They continue to lead both in and out of the water in showing that they are up for a challenge and not intimidated.”

Pijulet began the meet with a victory in the 200-yard medley relay race along with teammates Nicholas Arakelian, Marius Kusch and Ben Mayes. The team’s time of 1:28.99 was just 0.17 ahead of Virginia Tech’s ‘A’ relay team.

The Royals women’s team with travel to No. 5 Wingate University on Friday afternoon for their next meet, while the men’s team hosts No. 8 Wingate on Saturday morning.

Queens Athletics will be entering its 30th season of co-ed collegiate athletics after finishing fifth in the 2016-17 NCAA Division II Learfield Directors’ Cup Standings, the highest finish in program history.

The Department of Athletics at Queens University of Charlotte is a leading NCAA Division II program in the United States distinguished by its commitment to transforming the lives of its students, and consistently competing at the highest possible levels. Housing 30 varsity level sports, the Royals are a member of the South Atlantic Conference with the men’s and women’s swimming teams competing in the Bluegrass Mountain Conference.

Queens University of Charlotte is a master’s-level university with a commitment to both liberal arts and professional studies. Located in the heart of Charlotte, Queens offers undergraduate, graduate and online degrees such as a highly regarded MBA program, a top-10 Low-Residency MFA program, and an online MSN-Clinical Nurse Leader degree. The university serves approximately 2,250 students through its College of Arts and Sciences, McColl School of Business, Wayland H. Cato, Jr. School of Education, James L. Knight School of Communication, Hayworth School of Graduate and Continuing Studies and Andrew Blair College of Health which features the Presbyterian School of Nursing.