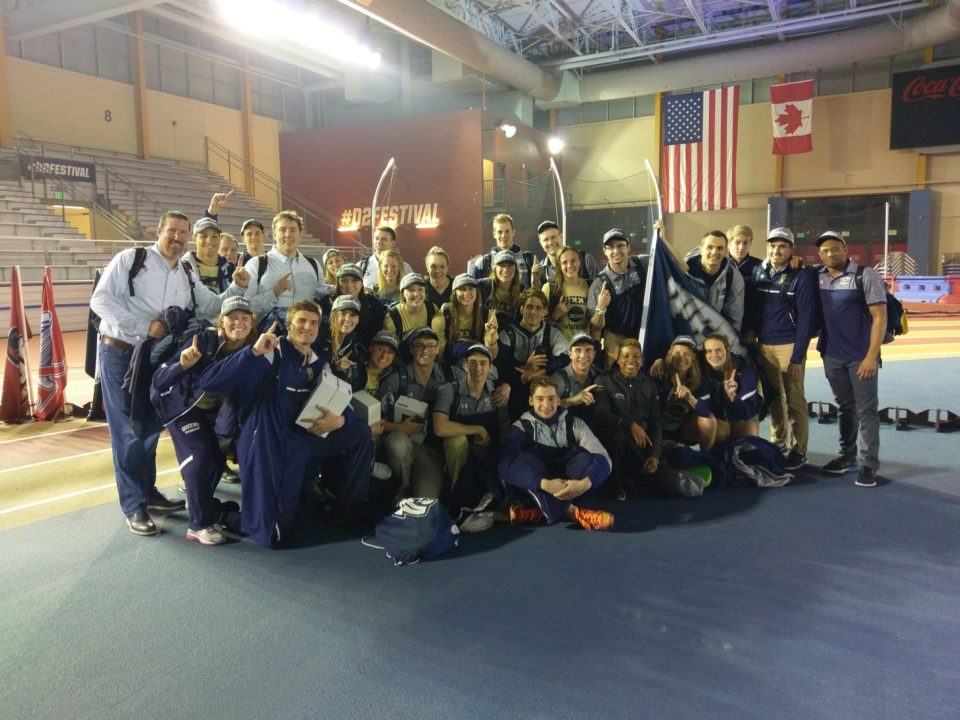 The Queens women also handled Wingate convincingly, winning by almost 120 points. The highest NCAA D2 ranking to come from the women’s meet was Queens freshman SJ Atkinson, who won the 200 breast in a time of 2:18.75.

Queens and Wingate are currently ranked 1st and 4th respectively for men, and 1st and 17th for women by collegeswimming.com’s Division 2 team rankings.

The Bulldogs are No. 5 overall in the poll and picked up their only win in the 100-yard butterfly. Queens’ sophomore Georgia DaCruz finished second in the race with a time of 56.29, just .02 seconds behind Wingate’s Ebba Stillman.

“Our women and coaching staff have the utmost respect for the Wingate women, thus we showed up to race in a high quality way,” said Queens Associate Athletic Director for Strategic Planning and Leadership Development/ Director of Swimming Operations Jeff Dugdale. “I feel good closing out October with some fast swims. I was most impressed with how fierce our freshmen were.”

All three freshmen on the team collected wins in the meet, with Rachel Massaro beginning the afternoon with a victory in the 100-yard backstroke.

The Royals’ final individual win came from senior Alexandra Marshall in the 100-yard freestyle (52.58), as the 400-yard freestyle relay team of Lorda-Taylor, Kyrie Dobson, Marshall and Prayson registered the team’s final win of the evening.

Queens returns to the pool for the annual Fall Frenzy on Nov. 17-19 at the Mecklenburg County Aquatic Center.

CHARLOTTE, N.C. – The top-ranked Queens University of Charlotte men’s swimming team secured 12 first-place finishes in a dual meet with No. 8 Wingate University on Saturday morning in the Levine Center.

Six different Royals won an event on the day, while the 400-freestyle relay team of Marius Kusch, Alen Mosic, Dmytro Sydorchenko and Ben Mayes reached the wall first with a time of 3:01.54.

Senior Paul Pijulet won two events against the Bulldogs, beginning the day with an NCAA B Standard time of 48.19 in the 100-yard backstroke. He followed with another NCAA B time in the 200-yard backstroke, finishing in 1:47.33 to take the win.

Pijulet’s third NCAA B time of the meet came in the 200-yard freestyle, where his time of 1:39.95 was good enough for a second place finish behind Mosic (1:39.85) who also had an NCAA B time

Sydorchenko was also an individual winner for the Royals, reaching the wall first in the 50-yard freestyle with a time of 20.92.

The Bulldogs’ lone win came in the 100-yard freestyle race.

Queens returns to the pool for the annual Fall Frenzy on Nov. 17-19 at the Mecklenburg County Aquatic Center

Wingate sophomore Ebba Stillman (Huskvarna, Sweden) won one gold, one silver and one bronze medal for the Bulldogs. Stillman touched first in the 100 Butterfly with her triumphant time of 56.27. She was second in the 200 Butterfly (2:05.79) and third in the 500 Freestyle (5:18.00).