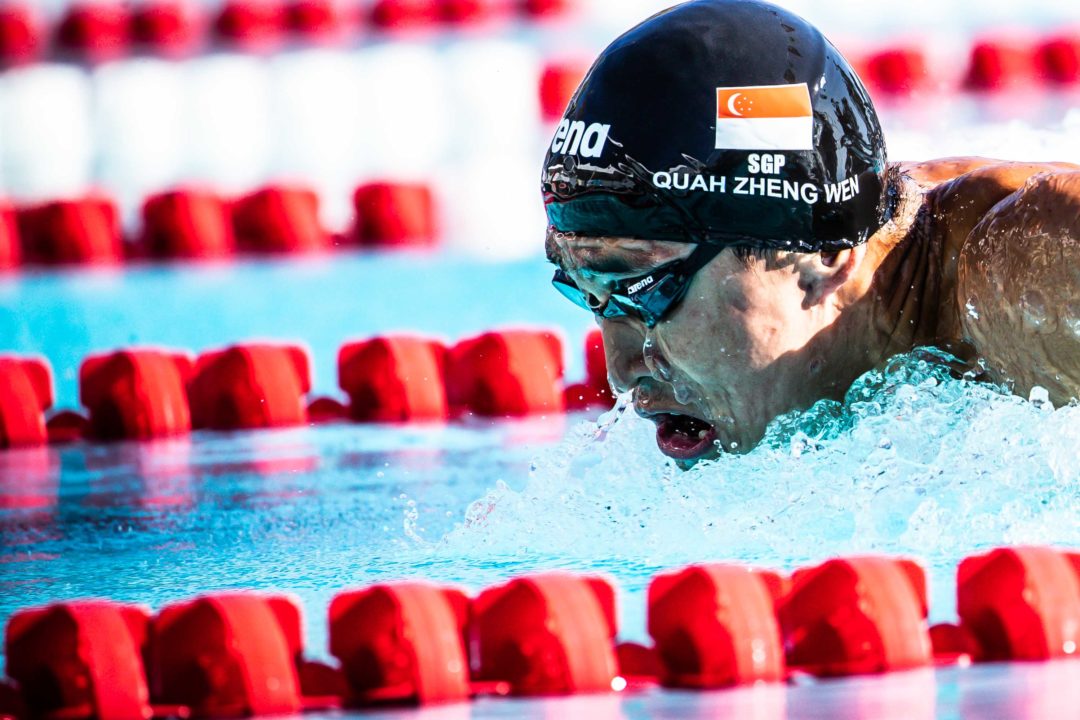 The Quah siblings of Singapore wreaked major havoc on day one of the swimming competition at the 2021 (2022) Southeast Asian Games in Hanoi, Vietnam.

The trio of Quah Zheng Wen, Quan Ting Wen and Quah Jing Wen collectively hauled away 4 gold medals to kick off the competition, with Jing Wen topping the family with 2 individual golds.

For Zheng Wen’s part, the Cal swimmer produced a time of 54.83 to take the men’s 100m backstroke, successfully defending his SEA Games title from the 2019 edition in the Philippines. There 3 years ago, Zheng Wen turned in a winning time of 53.79, a mark that remains the Singaporean national record in the event.

His sister Ting Wen then topped the women’s 100m free podium, putting up a time of 55.60 to beat her competitors by over a second. The 29-year-old DC Trident ISL member also earned her second consecutive gold in this event, although she was quicker 3 years ago with her meet record-setting 54.74.

Finally, Jing Wen did damage across the women’s 200m fly and 200m IM events, grabbing gold in each with a new national record in the former.

Getting to the wall in a mark of 2:09.52, Jing Wen, formerly of Texas A&M, turned in a new lifetime best. Her outing here overtook the previous national record of 2:10.01 she logged at the Fran Crippen Swim Meet of Champions last year.

While the aforementioned results were positive for Singapore, the nation was dealt one blow on the evening in the form of a relay disqualification.

The foursome of Joseph Schooling, Mikkel Lee, Zheng Wen, and Jonathan Tan originally clinched the men’s 4x100m free relay gold, registering a time of 3:17.19. (Splits not available at the time of publishing).

However, while they were in the midst of giving poolside interviews, the squad was informed that they were in fact DQ’d, rendering Vietnam the gold medalists. Vietnam had gotten to the wall in a time of 3:21.81.

On the disqualification, Singapore’s national head coach Gary Tan said, “I think it’s based out of a technicality. It’s very tough to actually make a protest of the result as well. Even though we’re trying to find a reason and we wanted to make sure that this was not an issue of the technical error,” he said.

“Kudos to the boys. Not a fault of anybody’s; I think there’s something that happens in a competitive environment.”

The most ridiculous thing with this useless results website is it has Quah Zhengwen swimming third in the relay, while the official results scanned and posted by the SSA has Jonathan Tan as the culprit going -0.05 RT https://www.swimming.org.sg/SSA/SWIMMING/Events/31st-SEA-Games-14-May-Swim-Finals-Results-(1).aspx

Either way, it wasn’t Schooling despite Vietnamese media reports.

I didn’t know Sim represented Singapore. I thought she is part of USA junior national team with Flynn

Her sister is also slated to swim for Singapore. Levenia’s name was down for the Asian Games before it got postponed.

I hate how it’s so difficult to track this seagames. There’s no graphics on livestream and their official website sucks. Even the final results have to be photographed then uploaded onto SG swimming website

SG boys splits look good though, hoping they’ll put this behind them and clock more good timings this week

I’ve followed SEA Games swimming for more than 2 decades. I’ve always known that my expectations when it comes to SEA Games websites and pools have to be set lower, they wont be fancy. But this SEA Games really takes the cake. The website is honestly, useless and what irks me the most is that the broadcast doesnt even show timings on screen during the race. It doesnt show you split times, it doesnt show you who won. It’s almost as if I’m watching someone’s hand held camera on live TV.

Case in point – Quah Jing Wen whooped after winning the 200 Fly, and I knew it had to be a good time but guess what? Viewers couldnt… Read more »

Singapore got more Gold medals than 1 on Day 1 of the meet. The chart needs updating. The host website is not very helpful, in my opinion, and links are not swimming specific.

The meet is in Meet Mobile to see times and accurate medal counts. It’s called “31st Southeast Asian Games”. There are more than 4 countries participating in swimming at these Games. In fact, a total of 9.

Prelims start 7:00pm and Finals start at 4:00am PST. Singapore has a Livestream of the meet, just not sure if available in the U.S.

Very odd that they don’t know why they were DQd.

I suspect they probably do. Swimswam doesn’t know.

Looked it up. One of the swimmers took off too soon. Don’t know which one.