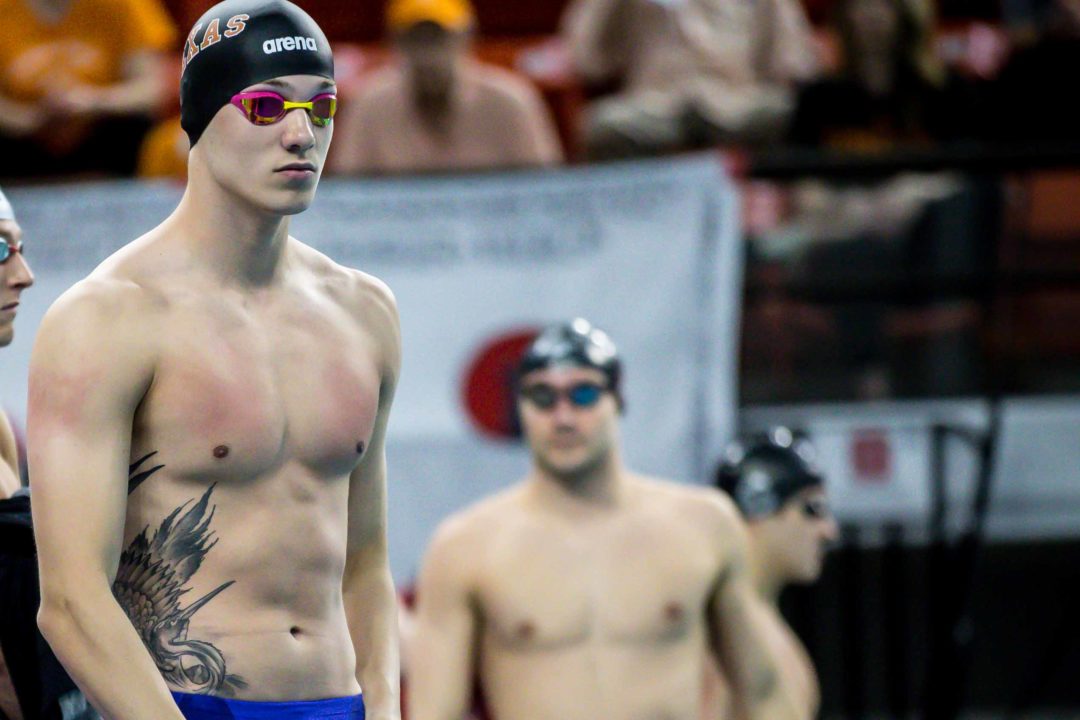 The Longhorns host the rival Aggies in the first dual meet of the 2020-21 season. Archive photo via Jack Spitser/Spitser Photography

Team Rankings: Texas is No. 1 in the CSCAA Division I preseason poll. The Longhorns received a total of 374 points in the poll, ahead of California (359) and Florida. Texas A&M is No. 7 in the preseason poll. The rankings track dual meet strength specifically and are not a NCAA Championship finish prediction.

Kibler Off to Fast Start: Junior Drew Kibler posted a pair of NCAA “A” cut times at the First Chance Invitational. Kibler claimed the win in the 500-yard freestyle (4:08.26) on the meet’s opening day, narrowly missing the pool and school record (4:08.19) set by Townley Haas. He returned to win the 200-yard freestyle (1:31.10) on the following day.

Hello, Carson Foster: Freshman Carson Foster wasted no time in making a splash during his collegiate debut at the First Chance Invitational. On the meet’s opening day, Foster set a U.S. national age-group record in the 400-yard individual medley with a time of 3:35.27, eclipsing the previous American record for the 17-18 age group held by Andrew Seliskar (3:37.52) by more than two seconds. The time also set a UT school record in the event, besting the previous mark of 3:36.37 by Will Licon.

Storied Program: Texas has claimed 14 NCAA Championships, finished runner-up 12 times and has a total of 33 top-3 finishes at the NCAA Championship meet. The Longhorns have won all 24 Big 12 Conference titles and have claimed 41 consecutive conference crowns.

Head Coach Eddie Reese: Eddie Reese is in his 43rd season at the helm of the Texas program. A three-time U.S. Men’s Olympic Team head coach (1992, 2004, 2008), Reese is the winningest coach in the sport’s history with 14 NCAA titles. He has coached 29 Olympians who have amassed 39 gold, 16 silver and eight bronze medals. Reese is the only collegiate swimming coach to win an NCAA team title in four separate decades.

Did the results from the First Chance Meet with Texas and Texas A&M a couple weeks ago count toward NCAA cuts? Anybody know?

I’d assume so or there wouldn’t have been a point to shaving.

They’re in the database, for whatever that’s worth. Though some meets went in there that maybe shouldn’t count. But, I can’t think of any reason why that First Chance meet wouldn’t have counted.

The reason I ask is that they don’t show up in College Swimming rankings or meet results at swimcloud.com which usually is up to date and has been a go to source for me to see where everyone is ranked during the season as well as where all the recruits are going.