Presidents and ‘Smash Bros’: How Your Favorite Swimmers Pass The Time At Meets 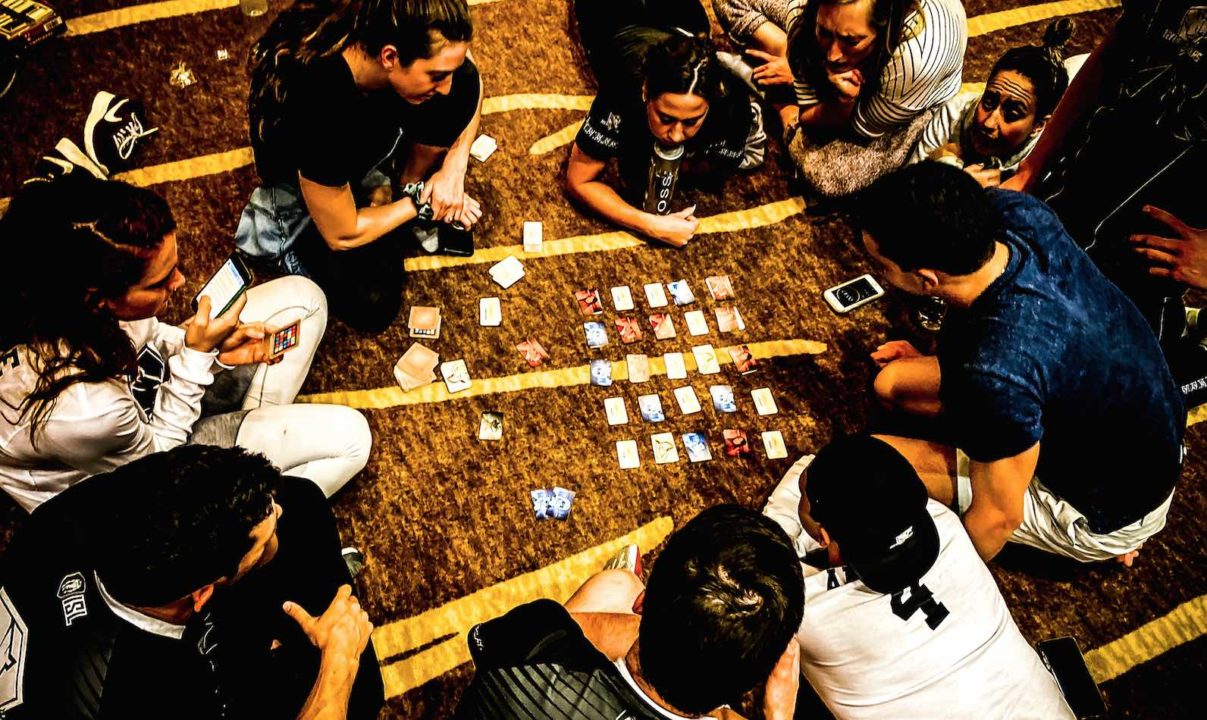 In swimming, a lot of downtime is punctuated with moments of furious action. How do the best in the world pass the time at the biggest meets? Stock photo via Jack Spitser/Spitser Photography

With the world shutting down, we’re reaching into our archives and pulling some of our favorite stories from the SwimSwam print edition to share online. If you’d like to read more of this kind of story, you can subscribe to get a print (and digital) version of SwimSwam Magazine here. This story was originally published in the 2020 Spring edition of SwimSwam Magazine.

Swimming is not a sport of constant motion. A lot of downtime is punctuated with moments of furious action. From summer league all the way to the elite levels, swimming is a story of hours and hours of waiting to swim, broken up by a little warm-up, a few seconds or minutes of racing, and a little cooldown.

The higher you reach in the sport, that downtime becomes more about recovery than just passing the time. But the athletes still take some time out of their schedules for rest, relaxation, and a little fun.

SwimSwam reached out to a few elite swimmers to see what kind of things they do to pass their days when traveling for big international competitions. Their answers varied a little but largely focused on four things: napping, eating, card games, and video games.

The advent of portable video games and Netflix has reshaped teams’ activities. Whereas a previous generation was almost strictly playing cards, the activities now are more varied — though cards are still a big part of swim culture.

Ryan Murphy, 2016 triple Olympic gold medalist, world record–holder: Before meets, I’m pretty relaxed. So the majority of what I do is watch movies with the guys, go out to nice meals with Chase Kalisz, and play Presidents [a card game].

The Georgia guys play a lot [of Presidents], so they’re all good. Honestly, Chase is probably the best, but it’s really a toss-up between Chase and Jay [Litherland]. Those games are fun because I’ll usually bring a speaker to the meet so we can listen to some chill music while we play.

Chase, Kevin Cordes, and I will go out to a nice steak after most meets we’re at. Knoxville has a great steakhouse. In Singapore, Chase and I went to Cut by Wolfgang Puck. They have some pretty unique cuts. He definitely eats way more than I do — he had a three-pound cut while I had a 12-ounce.

Tom Shields, 2016 Olympic gold medalist: After a meet, we usually get food, then I go to my room to stretch and relax. If we have downtime [no racing the next day], we may throw some cards around at poker, spades, or maybe even play “Super Smash Brothers.”

Lilly King, 2016 double Olympic gold medalist, world record–holder: The girls love playing any kind of card game or board game. Usually [Allison] Schmitt brings Codenames, so we play that a lot. We also love playing Spoons and Presidents. When we aren’t playing board games, I’m usually watching whatever Simone is on Netflix!

Zach Harting, US national team member: Most of what I do is nap. Me and Zane [Grothe] watch Netflix together. I normally bring a show to start, and we start it together and binge it as we have time. I also got introduced into playing [Nintendo] Switch with a lot of the national team men. We’ve played “Mario Tennis,” “Mario Kart,” and “Super Smash Brothers.” And then eating. But mostly between eating and getting a massage and sleeping, that’s where most of my time goes.

[Caeleb] Dressel and [Blake Pieroni] are good at “Mario Tennis.” Dressel is good at “Super Smash Brothers,” but so is [Nathan Adrian].

How to Play Presidents

Deal: The dealer deals one card at a time to each player until all the cards have been dealt.

Play: The player to the dealer’s left starts by playing (face up) any one card or any set of cards of equal rank (for example, three 5s). Each player in turn must then either pass (i.e., not play any cards) or play, face up, a card or set of cards that beats the previous play.

Any higher single card beats a single card. A set of cards can be beaten only by a higher set containing the same number of cards. So, for example, if the previous player played two 6s, you could beat this with two 7s or two queens, but not with a single queen or three 7s (though you could play two of those 7s and save the other for a later round).

Passing is always allowed, even if you can beat the previous play. Passing does not prevent you from playing your next turn.

Play continues until someone makes a play that everyone else passes on. All the cards that have been played are then turned facedown and put to one side. The player who played last in the previous round starts again.

Winning: The first player to get rid of all their cards is awarded the highest title of President. The last player with cards remaining is known as the Scum.

real question is who does everyone main in smash

In national quarantine world, we would love to see a scorecard / live results of a virtual competition among national team members.
Please consider. kthx

I will take down any US national teamer in ultimate

I know the game they’re describing as “capitalism”. Anyone in the same boat?

Before training trip senior year in college, we went out an bought Game Cube and Smash Brothers Melee just so we could bring it with us and run tournaments in the hotel in-between practices!! (Game Cube version was important because you could do 64 person bracket and each person could pick 4 people to play)

It was the best decision we ever made!