Pisces “the Fish” Most Common US Olympic Zodiac Sign 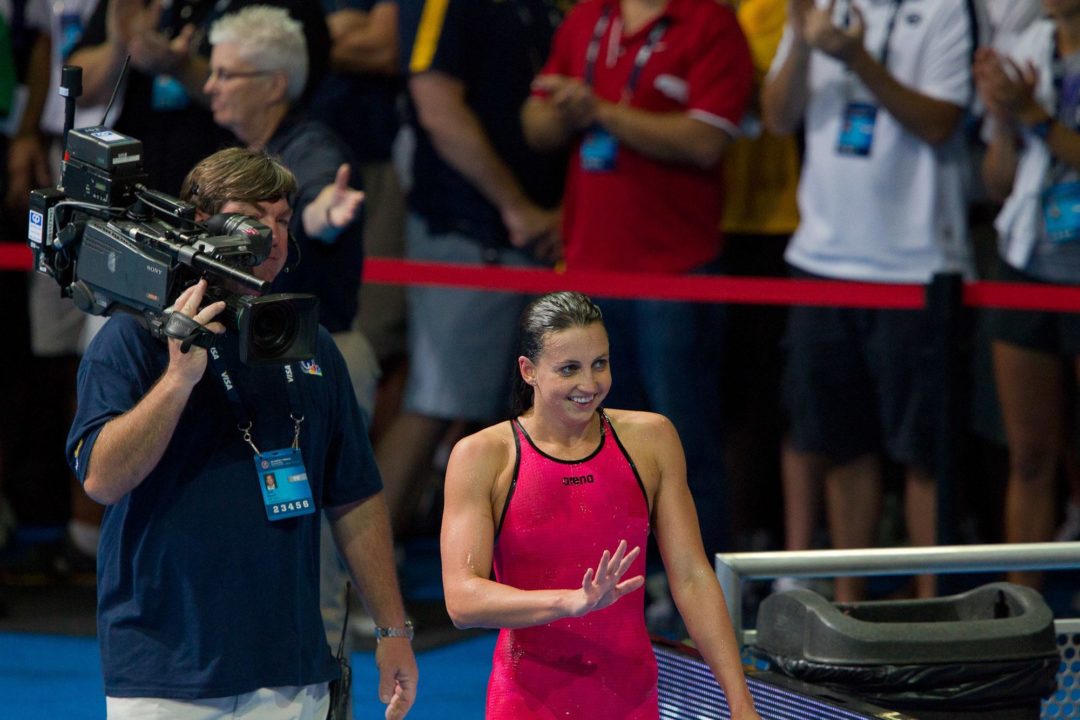 Rebecca Soni is one of 13 American Olympians who identify with the fish, and other fun (Photo Courtesy: ©Tim Binning/TheSwimPictures.com)

It’s time for some geekery with the 2012 US Olympic swimming team, and specifically pertaining to the ages and birthdays of the 49-swimmer roster.

In both cases, the median reveals that a few outliers at the upper end of the spectrum (Jason Lezak, Natalie Coughlin) skew the averages upward while the biggest concentrations of athletes are below the average. The median for the women is 21 years, 282 days and the median for the men is 25 years, 37 days. The latter of which is more than a year younger than the average.

The oldest Olympian is Jason Lezak at 36 years, 243 days (make that 267 when the games start);Natalie Coughlin holds that honor on the women’s side at 29 years, 346 days when the torch is lit – a stark contrast to the 41-year old Dara Torres that was in the veteran position in 2008.

The titles of youngest man goes to Connor Jaeger from Michigan at 21 years, 94 days when the games begin; about two months younger than his fellow 1500 entrant Andrew Gemmell (21 years, 163 days). For the ladies, Katie Ledecky at 15 years, 136 days is the youngest Olympian we’ve had since Katie Hoff was 15 years, 61 days when the 2004 Olympics began in Athens.

Olympians this year are born overwhelmingly in the months of February and March. 18 out of our 49 Olympic swimmers (including open water) were born in those two months.

But perhaps that’s perfect – because the most predominant zodiac sign of athletes on this year’s Olympic team is Pisces, the fish, with 13 out of the 49 athletes falling into that category. That’s poetic.

There are two twins on this year’s Olympic Roster, though neither the matching siblings of Cammile Adams or Shannon Vreeland made the team. Cammile’s sister Ashley swam at the Trials and had a great meet; Shannon’s sister Michelle is an honor student at Kansas State and took up cheerleading instead of swimming.

There are however two instances of athletes having the same birthday without relation: Jessica Hardy and Tyler Clary were both born on March 12th, though Hardy was two years earlier. Elizabeth Beisel and Tyler McGill were both born on August 18th, except Beisel is only 20 whereas McGill is 24.

For all of the talk about teenage sensations at the Olympic Trials, only 5 Americans will still be teenagers when the Olympics begin: Elizabeth Beisel, Missy Franklin, Rachel Bootsma, Lia Neal, and Katie Ledecky. They’re all on the women’s side of the meet.

Only a single Olympian has a birthday between the opening ceremonies on July 27th and the closing ceremonies on August 12th: Ryan Lochte will turn 28 on August 3rd. Michael Phelps (June 30th), Lauren Perdue (June 25th), and Kate Ziegler (June 27th).

Most of our Olympians were born during the work week, with only 8 out of 48 being weekend babies. The most common days of birth are Tuesday and Wednesday, with 10 each.

Random observation, but I remember reading a “theory” about this before that was backed up with some data (I think actually pertaining to youth hockey vs NHL). Could it be there are more Feb/March birthdays on the Team becuase these swimmers as kids in age group programs all “aged up” just prior to all the spring high level age group championships in most parts of the country?? So they had to work harder to achieve, or they didn’t get smoke blown up their “egos” when they were the “superstar” at the age group levels.

Anybody else remeber this study or theory ???

There may be something to it…but couldn’t the opposite also be true? Kids who aged up right after championship meets would me more likely to place well at those meets, and stick with the sport?

I’ve heard a lot on theories of this nature before, but it’s all fairly philisophical I guess…

It is from either the Talent Code or outliers. It was about NHL players being majority born in January February because selection of hockey teams were based on year of birth so those kids got a leg up by being the oldest possible to be selected for the teams thus getting more practice and game time

Is this team the olympics team with fewest teenagers ever (5)?
How many were there in Athens or Beijing?

Love this!! Lochte is a textbook Leo, too.

Beisel is still 19, still a teenager! She doesn’t turn 20 until August 19th. No rounding up Braden!

No offense though but when u go against something u don’t know , bring something to lighten up the subject with your own researches or experiences .

Junker23 : what is your knowledge in that domain ??? probably less than zero ! So , i bet u beleive science come from scientists , right ? that science was not even born when astrology was allready very active in many fields ; I know this for having traveled in asia for the past 8 years . More over , that still use astrology for many usefull purposes . I think now the matter is completed .

Are you confusing astronomy with astrology?

Never mind, I’m staying out of this.

Has anyone noticed that Soni has a fish face kind of ??? for me , signs sometimes really match our human faces or expressions in life ! Some habits , abilities match the sign too .
Astrology is one of the oldest science on earth ( more than 5000 years old ) .