Who Are These People And Why Did They DQ My Kid? 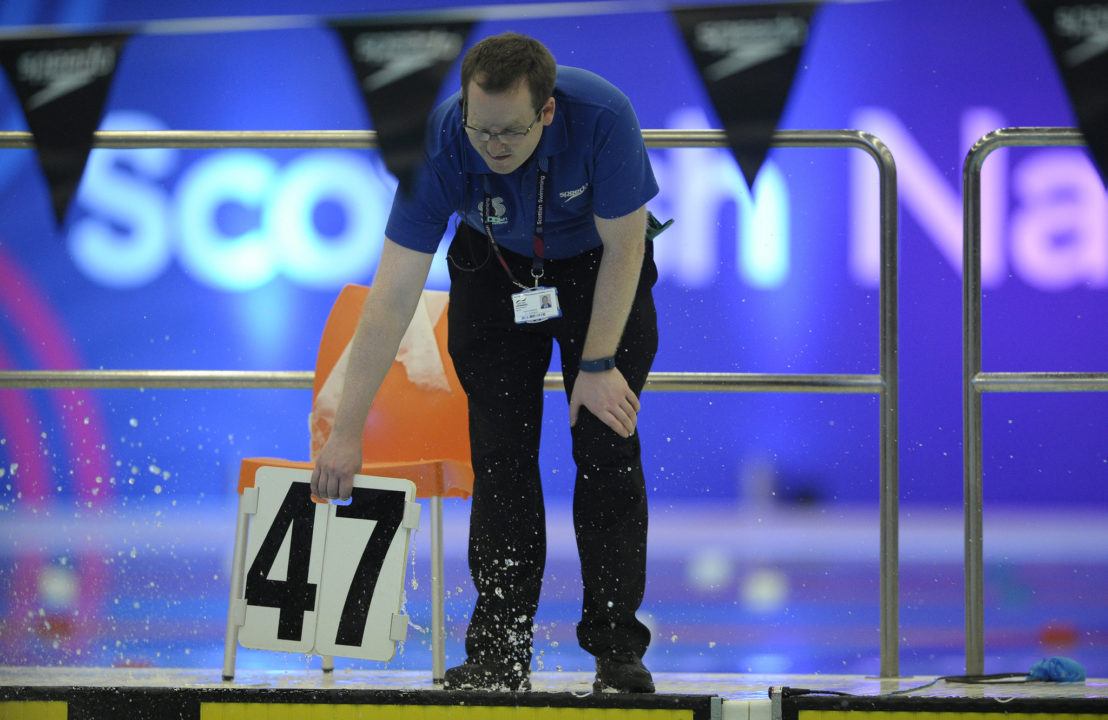 As a swim parent, have you ever wondered about the people standing around the pool, by the blocks, at the corners and the 15-meter mark? Archive photo via Ian McNichol/Scottish Swimming

This pasta salad recipe is super convenient, quick, easy, and perfect for meal prepping and making in batches.

Another reality television personality has claimed to be a former elite-level swimmer. This time, the claims hold a little more water.

Shouts From The Stands: How I Keep Swimming With An Electrolyte Imbalance

Paying attention to the little things, like electrolytes, can make all the difference in training plateaus or personal bests.

After winning an upset gold medal in the 4×100 medley relay back in 1972 in Ulster, John Irwin and Turlough O’Hagan swam a Masters meet alongside one another.

As a swim parent, have you ever wondered about the people standing around the pool, by the blocks, at the corners and the 15-meter mark? Some have clipboards or a whistle, and they talk in headsets while walking along the deck, giving hand signals. Who are they and is their sole purpose to DQ our swimmers?

The answer to that last question is no. According to Jan Szuszkiewicz, a long-time meet administrator and deck official in Southern California Swimming, “The philosophy in our LSC is to provide a safe and fair playing field for everyone. We aren’t looking to DQ anyone because we’re mean. We want to correct swimmers’ strokes so everyone plays by the same rules.”

When your kids do get DQ’d, the official will explain to them what they did wrong. They can work with their coach to improve their strokes and not get DQ’d in the future.

“We train our officials to make good calls and be professional. Our main purpose is to serve the swimmers. We treat everyone the same regardless of what cap they’re wearing, how old, how fast or what level they are,” Jan said. “We make sure to err on the side of the swimmer. We’re here because of them.”

Here are nine things I learned about officials that I didn’t know before. I had no idea there were so many different types of officials and jobs. This is how the officials are organized in our LSC. Each LSC may be a little different, but all are under the rules of USA Swimming.

The first step in becoming a deck official is “Stroke and Turn.” At high level meets like the Olympics there will be a stroke and turn official for every lane. At age group meets they watch more than one lane. You’ll see these officials at the corner or walking along the pool for fly and breast. There’s a 15-meter official who will stand at the 15-meter mark to make sure the swimmers pop up by then.

The “Chief Judge” watches finishes as well as stroke. This person receives information of an infraction from other deck officials and informs the referee. If the referee accepts the infraction, the chief judge tells the swimmer and writes the DQ on the timing sheet. The chief judge can act as a stroke and turn judge at the same time.

The “Deck Referee” makes sure swimmers are at the blocks for their heat and calls out for missing swimmers. The deck ref then blows the whistle.  Four or more short whistles means to get ready. At the long whistle, swimmers stand on the blocks. At that point, the deck ref gives a hand signal to the starter. Other officials report DQ’s to the deck ref and he or she decides whether or not to accept them. Another responsibility of the deck ref is to watch the start.

After the deck ref hands off the start via extended hand to the “Starter,” it’s the starter’s job to make sure each heat gets off to a good and fair start. The starter looks to see if swimmers hold set positions. They aren’t totally predictable in the start so that swimmers can’t anticipate a “one, two, three, go.”

A false start has to be seen by at least two officials. If only one official sees a false start, it won’t be a DQ.

The “Meet Ref” is In charge of the venue and their word is the law. This person makes sure the meet is running correctly. They will evaluate and give feedback to other officials.

Under the meet admin tent, you’ll find the “Administrative Officials.” The number of people varies on the size of the meet. Their job is to ensure every swimmer gets a fair time. The primary timing system these days is touch pads, then pickles and stopwatches. If the timing system goes down or a swimmer doesn’t hit the pad, the admin staff goes to backup timing. If swimmers are in wrong lanes, it’s up to the admin official to switch up the times and make sure each swimmer get their correct times. A few of admin’s jobs are seeding the meet, verifying entry times, sending reports and handling financials.

Most, if not all, officials are either current or former swim parents. If anyone is interested in becoming an official there’s information on the USA Swimming and local LSC websites.

What have your swimmers been DQ’d for? Did you agree with the call?

as board member, fundraiser, newsletter editor and “Mrs. meet manager.” She’s a writer with a bachelor of arts degree in editorial journalism from the University of Washington with a long career in public relations, marketing and advertising. Her stories have appeared in newspapers and magazines including the Los Angeles Times, Orange County Parenting and Ladybug. You can read more parenting tips on her blog: http://bleuwater.me/.

It was a Breastroke event no Ref. at the side of the blocks this is a 10 lane pool …The REF called a DQ for not touching 2 hands on the wall when he makes a turn …the Ref. was at the side of Lane 10 w/c I believed is more than 5 meters away the swimmer on the other hand was on Lane 6….upon my review with the video the swimmer really touch the wall simultaneously with 2 hands ….can the swimmer challenge the call?

Protocol will vary, but in my LSC the coach must initiate the process. Athletes and parents are not allowed to speak with the officials regarding a disqualification.
The coach would ask for clarification with the deck referee on the observation made by the judge and see if it agrees with the DQ that was reported. If the deck ref agrees with the report and decides to uphold the call, then the coach can escalate it to the Meet Ref – who has the final decision.

Is there anywhere that you can upload video and get officials to look at it and opine if a DQ was legit or if a legit DQ was missed?

Sure. Put it on twitter. I’m sure you’ll get tons of opinions.

USA-S is in the stone ages in our LSC. Understaffed and undertrained. You can’t call a non 2 hand touch, with one hand a foot underwater, from 3 lanes away. Or with 6 or 8 lanes of responsibility. And if you could, that’s over watching, because you need to treat all the lanes equally, not just the one or two you are over.

there should be max age limits (like the Olympics) for those on deck.

Time for a change and time for paid officials, like in most sports. .

Training can’t cover everything. Like false starts. I don’t care if 10 officials saw the false start, if the twitch or the reset of the hands weren’t in… Read more »

I don’t know who they are, but they sure seemed to dislike Matt Josa

Never 3 short whistles from the referee. 3 shorts is the universal sign of distress and should only be used by the lifeguard.
There is no such thing as a senior referee. Just deck and meet.

It has been an honor to observe all levels of swimming as an official and one thing that I will always remember is that the swimmer has given a lot to get to this event and heat it is my obligation to observe them without any bias.

Thanks for the article. A minor correction, it’s not necessarily three short whistles, but USA swimming calls for “short series of whistles”. Most deck referees that I know do four or five.

3 short whistles for lifeguards means emergency. Referees try to use 4 or more.

3 is a sign of distress used by life guards. I generally blow 5 or 6

I am always for the fair enforcement of rules and helping swimmers learn lessons through DQs is a huge part of that. It’s a life lesson that coaches can use as a teachable moment for many different lessons.

However, it is sometimes disheartening to hear officials make the statements they have before.
For instance, about 2 years ago, my swimmers had been working hard on perfecting Back-Breast ‘Crossover’ Turns and were getting pretty decent at it! Cue an official who was from our community and kind of knew the kids (they knew the kids that swam 1-2 decades ago a lot better as they used to be more involved than they currently are), telling the kids, ‘I don’t want… Read more »

I am surprised that they looked at your film. I had film evidence that an official DQ’d the wrong person on a false start call and they wouldn’t even look at it. That DQ’d caused the swimmer to finish second for the high point award.

Video should not be used

That official was out of line: in serious need of retraining.

That said, I really question the value of these fancy turns. Even at the college level, the error rate (shoulders past vertical towards the breast at the back-stroke finish) is fairly high. Since those fancy turns only buy the swimmer a couple of tenths (only one use opportunity per IM swim), it just doesn’t seem worth the risk.

That official should consider retiring.