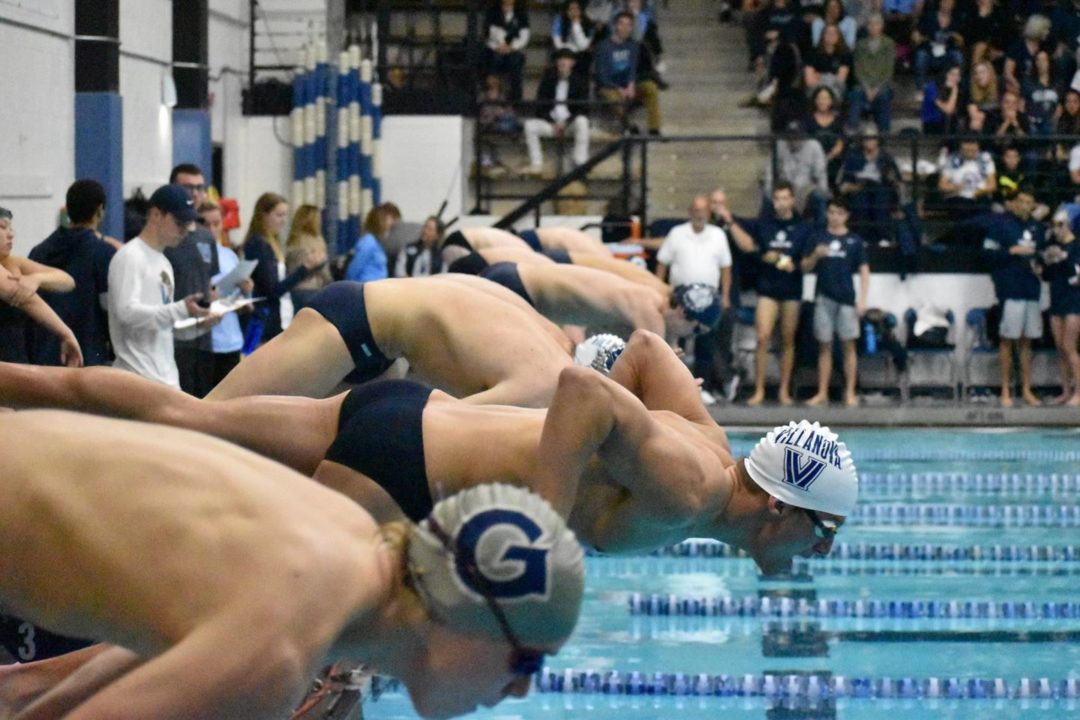 The Villanova women and Penn men split a pair of duals on Friday night, as the Wildcats won 157-102, while the Quaker won 160-96. Current photo via Villanova Athletics

PHILADLEPHIA – The University of Pennsylvania swimming and diving program split a pair of close duals with cross-town rival Villanova tonight. The men won the dual with a 160-96 decision while the women were edged, 157-102.

The Quakers won 15 total events on the night, with the men topping the podium in 11 and the women standing on top in four.

Recapping the Women
Grace Giddings started the meet by improving her collegiate-best time in the 1,000 free with a first place finish in the event, clocking in at 10:11.07. The time shaves off six seconds from her previous collegiate best, set last weekend at Columbia. Hannah Kannan (55.79) and Tara Larusso (57.46) kept things going as the sophomore duo took first and second, respectively, in the 100 back.

Serena Xue swam a strong final 100 and stretched to touch the wall first for a win in the 200-breast, edging Villanova’s Kaitlin Gravell by less than two-tenths of a second. Giddings (500 free, 5:01.23) and Kannan (100 fly, 56.33) rounded out the results for Penn with a pair of second-place finishes

Freshman Matt Bonnell continued a positive start to his career at Penn with his second win in as many meets, topping the podium in the 200 free (1:42.12). Fellow freshmen, Neil Simpson (2:07.74) and Eric Wang took the top two spots in the 200 breast, beating out the rest of the competition by over two seconds.

In the 200 fly, Penn again finished first and second. William Kamps led the charge with a 1:51.50 finish followed by Jason Schreiber, who clocked in at 1:54.72.

The Quakers then showed strength in the sprints. Cunnan (20.94) and Matthew Dieffenthaller (21.11). finished first and second in the 50 free. In the next event, Dieffenthaller stayed in the water to tie Kamps for first in the 100 free (46.41).

Penn bookended the results with the top time in the meet’s final event—the 200 free relay. Though the swim was scratched, Boris Yang, Fallon, Elizarov, and CJ Hinckley finished with the event’s top time, clocking in at 1:26.76.

UP NEXT
The Quakers dive right back into action tomorrow with an Ivy League dual meet against Brown. The action will occur at Sheerr pool starting at noon.