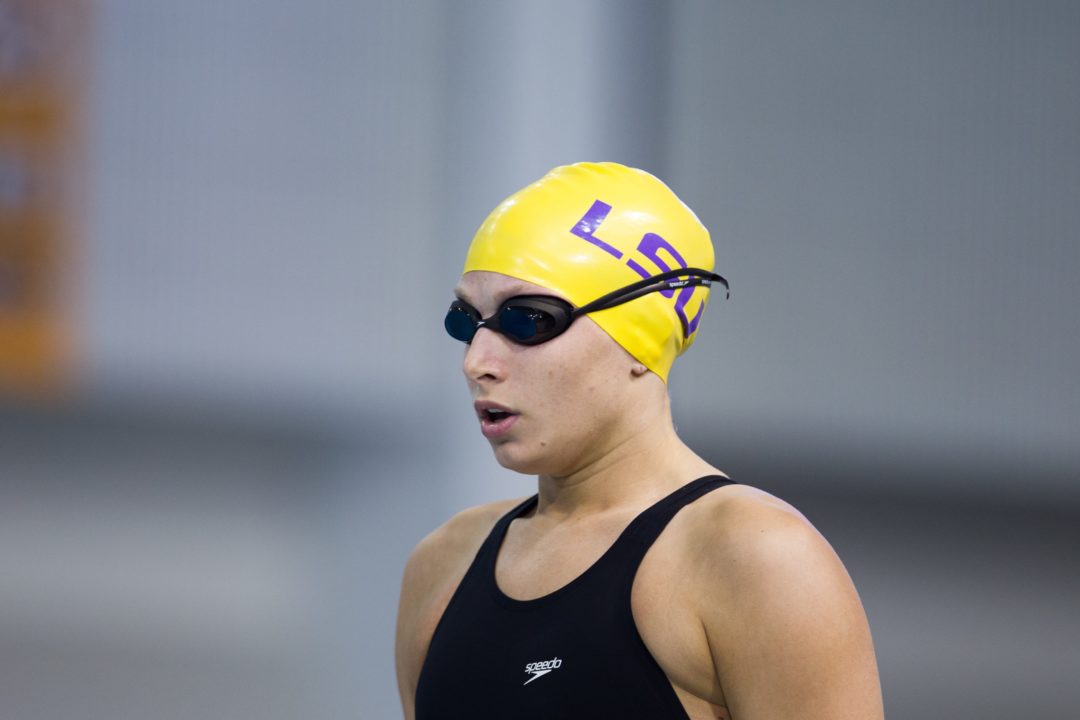 The biggest transfer of this 2012 college swimming off-season has found her new home in Tucson, Arizona – former LSU Tiger Amanda Kendall has announced that she will use her final year of college eligibility in Arizona.

Kendall had a breakout start to her junior season in Baton Rouge. After a great summer that saw her final at Natioanls in the 100 free, she joined Team USA at the Pan Am Games where she won four gold medals. She also has six NCAA Honorable Mention All-American awards to her name.

But the season didn’t end as well as it began, as Kendall injured her hand just a few weeks before NCAA’s, was out for that meet, and ended up being removed from the LSU team.

But she’ll be looking for a fresh start under the lead of Eric Hansen at Arizona. This is a huge signing for the Wildcats, as it will fill in the hole left by the transfer of Aubrey Peacock to Auburn. With Kendall on the team alongside Margo Geer and the rest of a great sprint group, the Wildcats should have two A-Finalists at next year’s NCAA Championships in both sprint events – which bodes well for an overall team standing. That’s also a key to chipping away at the Cal dynasty out west; with Liv Jensen’s graduation, the sprints are the biggest area of concern for the Bears next season.

Kendall is also an outstanding butterflier, and could fill in a hole there where Arizona is short on depth.

Best Times, keeping in mind that these are all from the 2011 SEC Championships:

LSU granted Kendall a full release to compete immediately outside of the SEC, so the presumption would be that if everything checked out on the other end, we’ll see her in the pool this in the desert.

She is back in the water racing, and still has an outside chance a relay berth for the Olympics. Back home in Virginia and training with her old club coach Peter Ward (also the head coach of George Mason), she looked solid coming off of injury with a 26.0 in the 50 free and a 56.9 in the 100.

What did she do to break her hand and get removed from the LSU team?

I thought only LSU football players got into bar fights………

Hat’s off to LSU for drawing the line in this situation (hopefully they would apply the same standards if it comparably impacted football?). But as far as Arizona goes, one wonders – WWFD?

WWFD? Doesn’t matter. He left voluntarily and it is all Hansen’s show now.