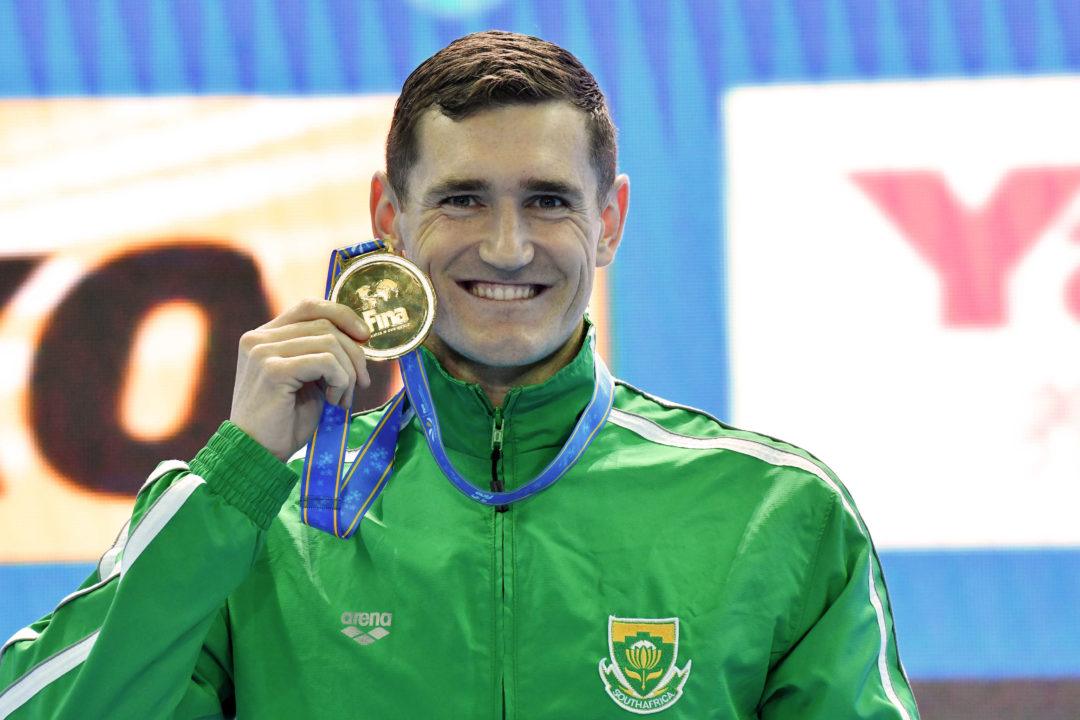 Cameron van der Burgh was the first Olympic gold medalist to announce that he was diagnosed with COVID-19, but says he's feeling back to normal. Archive photo via Gian Mattia D'Alberto / LaPresse

Van der Burgh was the first big-name swimmer, and among the first Olympians, to publicly disclose that he had tested positive for a coronavirus infection.

Van der Burgh’s description of his symptoms had a ripple-effect throughout the swimming community. While many athletes from other sports to that point had described mild or no symptoms, van der Burgh, who is less than 18 months removed from a Short Course World Championship in the 50 breaststroke, described it as “by far the worst virus I have ever endured.”

For many in the sport, this was a wakeup call that, while the incidents of severe cases like van der Burgh’s are higher among older and immuno-compromised individuals, young and healthy people can still have very severe symptoms.

He says it took about 3 weeks for him to feel totally back to normal.

The South African, who now lives and works in London, for hedge fund Andurand Capital Management.

Van der Burgh says that the outfit was tracking the spread of the coronavirus since mid-February, before it was on the radar of most countries outside of Asia, so it was ironic that he was one of the first in London to be diagnosed.

“I spent a lot of time studying this virus … In China they did a good job containing it,” said Pierre Andurand, the manager of Andurand Capital Management, to Reuters in early March. “In Europe and the U.S., I’m very worried that the measures they take are not drastic enough to stop or slow the spread.”

Andurand’s read of the market led his firm to take a short position on oil, which is a bet that the price would drop, which it has dramatically – driven by both the coronavirus outbreak, and a price war between Russia and Saudi Arabia. Last week, oil fell below $20 a barrel, and hit its lowest price in 18 years.

Van der Burgh says that other than the 4 days where he had a fever, he was able to continue working through the virus.

The 31-year old from Pretoria won Olympic gold at the 2012 Olympic Games in the 100 breaststroke and silver 4 years later in Rio. In total, he has 6 World Championship golds as well among 18 total medals.

More recently, a group of 9 elite Hungarian swimmers and coaches have tested positive for coronavirus after training camps in Thailand and Turkey. That list includes defending World Champion in the 200 fly Boglarka Kapas. None have reported any severe symptoms so far, though the identities of all 9 are not known.

hE oNLy bEaT iT bEcAuSe hE DiD tWo dOLpHiN kiCks

glad that he recovered that quickly !