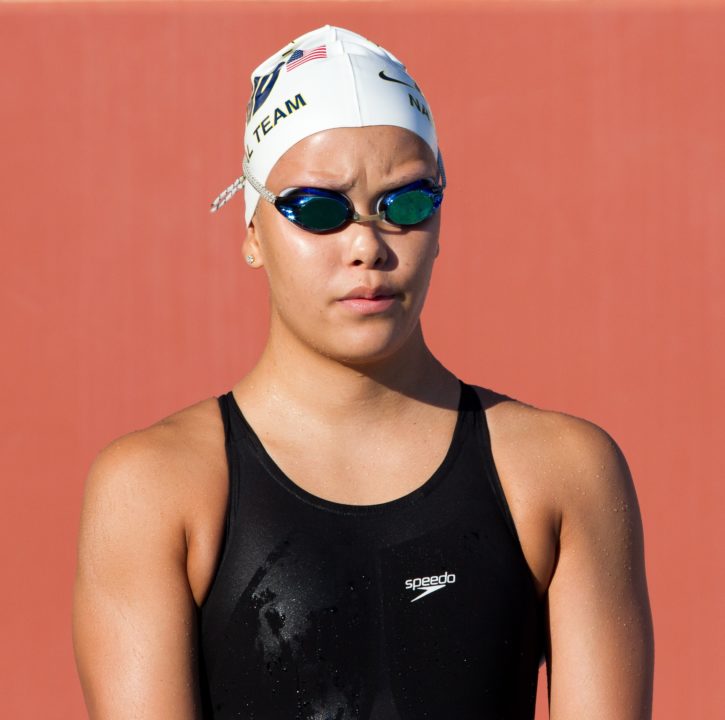 Olivia Barker out of Nevada had a much better prelims swim in the 200 fly than she did in the 100 on Friday. (Photo Courtesy: ©Tim Binning/TheSwimPictures.com)

The final preliminary session of the 2012 Winter Junior Nationals in Knoxville Tennessee came off a bit more cautiously than we’ve seen in the previous two days. With some of the toughest Meet Records from the three-day competition coming on the last day, for the first time not a single one was broken in the morning.

There were still be opportunities to get some in the afternoon, though. The first place to look will be the 100 freestyles. On the men’s side, the top three swimmers are all Floridians, and all will have a chance at Vlad Morozov’s 43.2.

Don’t sleep on the North Texas Nadadores’ Brett Ringgold either; he broke the 50 free record on Thursday and is tied with David Morgan as the 4th seed in 44.77.

In the women’s race, nobody broke 50 seconds despite 8 swimmers being seeded under that barrier. The top seed Lindsey Engel of the Orange County Waves came closest in 50.10, with Lauren Rhodes, Catherine Ladd, Linnea Mack, and Rochelle Dong all swimming 50.2’s

SwimMAC’s Kathleen Baker, taking a more relaxing day after four finals on Friday, also made the A-final in 50.42.

Cal commit Kristen Vredeveld tied for 9th and will have a middle-lane in the B-Final with a 50.56. Also in the B-Final is 14-year old Constanze Moseley thanks to a 50.82 personal best.

The other race where a Meet Record seems most possible, if not most likely, is the women’s 200 fly. Olivia Barker of the Nevada Sandpipers. After failing to go a best time in the 100 fly, Barker cut half-a-second off of her previous fastest swim in this longer 200. Mount Pleasant’s Megan Kingsley is not far behind in 1:56.34.

The men’s 200 backstroke record is likely safe, but we should see a competitive final with the top three seeds going to Stuart Hennessey (1:44.09), Carter Griffin (1:44.86), and Aaron Greene (1:45.00). Greene is the two-time defending Junior National long course champion in this event.

“the mens 200 backstroke is likely safe” haha that is an understatement. Ryan Lochte probably couldn’t beat it right now. Anyone know why he scratched at night?