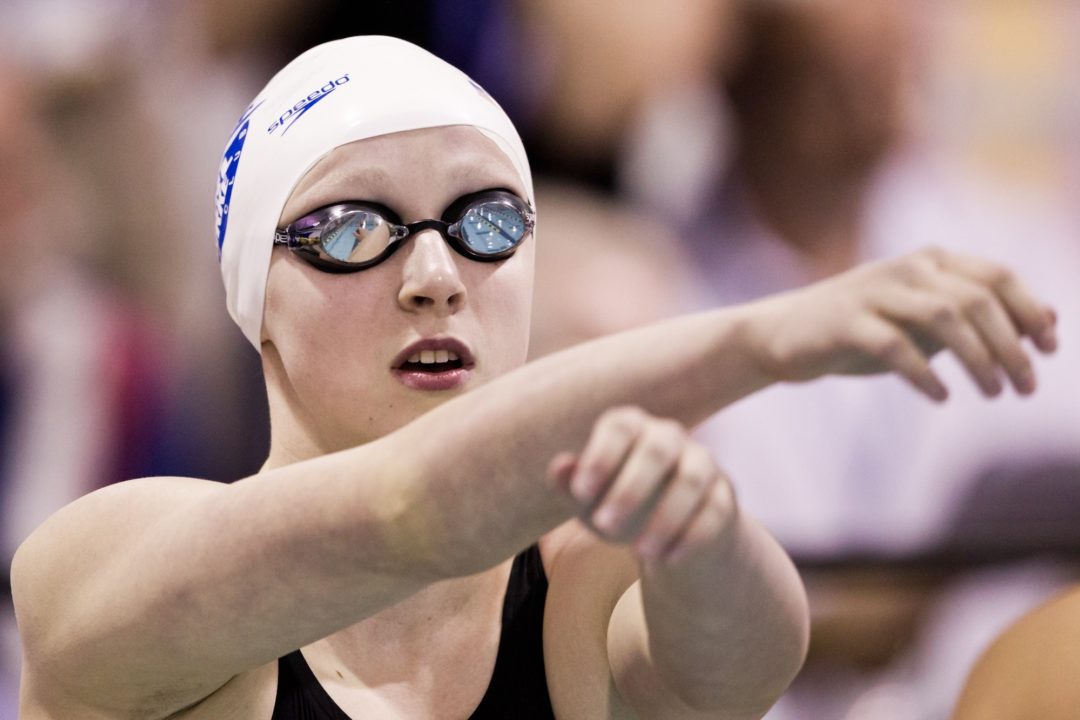 There were almost as many headlines at the 2012 Tom Dolan Invitational in Maryland as there were at Winter Juniors down the coast in Knoxville, Tennessee on Friday, thanks to amazing swims and National Age Group Records.

The top performer was Jack Conger. He only took on two swims on his first day at this meet, but they were two great performances. The first was a 46.15 in the 100 fly, that we broke down in this post, and the 2nd was on a relay leadoff. Kicking off Rockville-Montgomery’s 800 free relay, where he swam a 1:34.16. That’s his best time by a full second (better than this same meet last year, where he also was a personal best on a relay leadoff).

The other huge star at this meet is Olympic gold medalist and American Record holder Katie Ledecky. She scratched her only individual event of the morning, the 200 free, but still got a shot at that distance on NCAP’s 800 free relay. There, the club led off with one National Age Group Record holder (Janet Hu – 1:47.45) and anchored with another (Katie Ledecky – 1:45.53). With a pair of 1:51’s from Robyn Dryer and Kristina Li in between, they finished in 7:16.04. All four of those swimmers are 15 or 16, which makes this swim a new National Age Group Record.

The swim cuts more than two seconds off of a fantastic NBAC relay from 2010 that included Camryne Morris, Natalie Beale, Kelly Offutt, and Kendall Surhoff at 7:18.32.

Hu scratched the individual 200 free final, leaving the Delaware Swim Team’s Kaitlyn Jones to win the race in 1:48.30. Hu instead was going after her own 100 fly NAG Record, it would seem, set last week at Sr. Nationals.

This time, the 16-year old came up just short with a 52.60, exactly two-tenths off of the record, but still gave her the win by over a second-and-a-half.

PCAC’s Reece Whitley didn’t get a chance at breaking again his national age group record in a 200 breast final, as there was no 11-12 final in the 200 breast at this meet, but he did line up to go after the 50 breast record. This time, however, Michael Andrew’s speed was out of reach even for the fastest 11-12 200 breaststroker by four seconds, as Whitley won in 28.08. That was a three second victory over just 50 yards.

He now ranks 2nd all-time in the age group history in that event, about six-tenths behind Andrew’s best.

Thanks U guys for a wonderful meet i would like to give a shout to my son JALEN RAMJOHN AND CONGRATS TO HIM I’M SO PROUD OF HIM SEE U GUYS NEXT YEAR !!!!!