O’Connor Takes the Helm of the 200 IM World Rankings 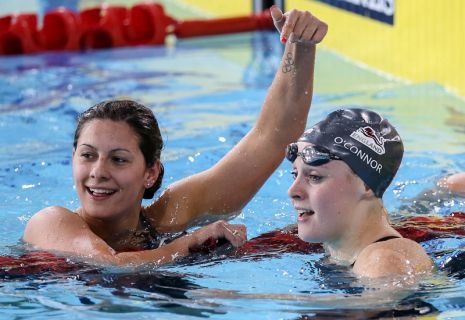 Siobhan-Marie O'Connor posted the world's fastest time in the women's 200 IM taking the event at the British Swimming Championships in a time of 2:09.51... Current photo via British Swimming

Siobhan-Marie O’Connor created the highlight of the third night of the British Swimming Championships. O’Connor took the women’s 200 IM in a time of 2:09.51 two seconds ahead of Hannah Miley who posted a 2:11.65. O’Connor’s catapults her to the top of the world rankings ahead of Kanako Watanabe who recorded a 2:09.81 just a week ago.

The time is the second fastest that the Commonwealth Games gold medalist who has posted in her career. O’Connor put up a 2:08.21 to win the gold last summer in Glasgow.

Miley’s silver medal winning performance is a season’s best and places her ninth in the world rankings.

After finishing third in the men’s 100 backstroke Craig McNally returned to the water to take gold in the men’s 200 backstroke in a time of 1:57.58. McNally was well off his best of 1:55.67 which he posted at the 2013 World Championships in Barcelona.

The women’s 100 backstroke was a thrilling race involving Elizabeth Simmonds, Lauren Quigley, Fran Halsall and Georgia Davies. The speedster Davies turned first at the 50 meter mark in a time of 29.04 followed by Quigley who recorded a 29.27 with Halsall (29.45) and Simmonds (29.61) not far behind.

Simmonds vaulted her self from fourth to the top of the podium in the final 50 meters winning the event in a time of 1:00.03. Quigley finished second in a time of 1:00.16 followed by Halsall who hit the wall in a time of 1:00.29. Davies, the Commonwealth Games silver medalist, dropped down to third finishing in a disappointing 1:00.74.

Simmonds time puts her seventh in the world rankings.

Stephen Milne won the men’s 1500 freestyle in a time of 14:58.25 putting himself in the second place position in the world rankings with only Mack Horton having gone faster this year.

In another fine performance Jazz Carlin recorded a winning time of 8:21.58 in the women’s 800 freestyle. Carlin’s time puts her third in the world rankings behind Katie Ledecky and Jessica Ashwood.

Carlin had an incredible summer improving on her time in the event by almost three seconds in the event posting an 8:15.54 to win the European Championships.

He is Indeed the same Joe Patching – He started at Plymouth with Proud & Ruta.

SMOC understandably a little disappointed with her time after her 100FR PB.. her freestyle was 31.8(!!) because she pushed a little too hard early and it got quite messy, she was not pulling the water cleanly. On the team, much faster to come in Kazan, no complaints. Good youngsters in the IM – 16yo Coates 2.14 and 13yo Sutton & Hobbah on 2.19s.

100bk was disappointing – It was a bit like the French 100fr… all the girls were so close on paper it all got very tight.