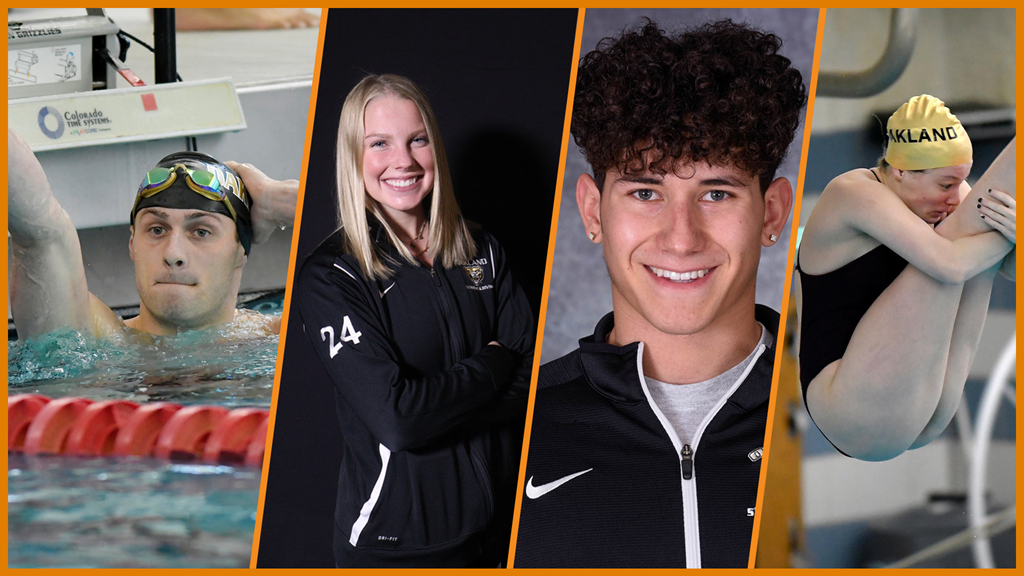 MEN’S DIVER OF THE WEEK | NICHOLAS SCHMID | OAKLAND | FRESHMAN | FARMINGTON HILLS, MICH.
Oakland’s Nicholas Schmid recorded two first place finishes in the Golden Grizzlies’ win over Wayne State Sunday, 194-86, sweeping the men’s diving competition. The freshman got things started on the three-meter board with a score of 295.73, before adding another first place finish in one-meter competition with a mark of 260.18, securing 18 points en route to Oakland’s win over the Warriors.

WOMEN’S DIVER OF THE WEEK | ELLIE CHALIFOUX | OAKLAND | SOPHOMORE | BEVERLY HILLS, MICH.
Oakland’s Ellie Chalifoux recorded three first place finishes in the Golden Grizzlies’ weekend sweep over Wayne State. The sophomore started her dominant weekend performance on Saturday scoring 262.80 on the one-meter board and 263.55 in three meter competition, securing 18 points en route to Oakland’s 179-96 win over the Warriors. The Beverly Hills, Mich. native capped off the weekend with a score of 260.93 on the one-meter board, good for first place in Sunday’s meet against Wayne State. Chalifoux added a second place finish in three-meter competition, scoring a 258.75.