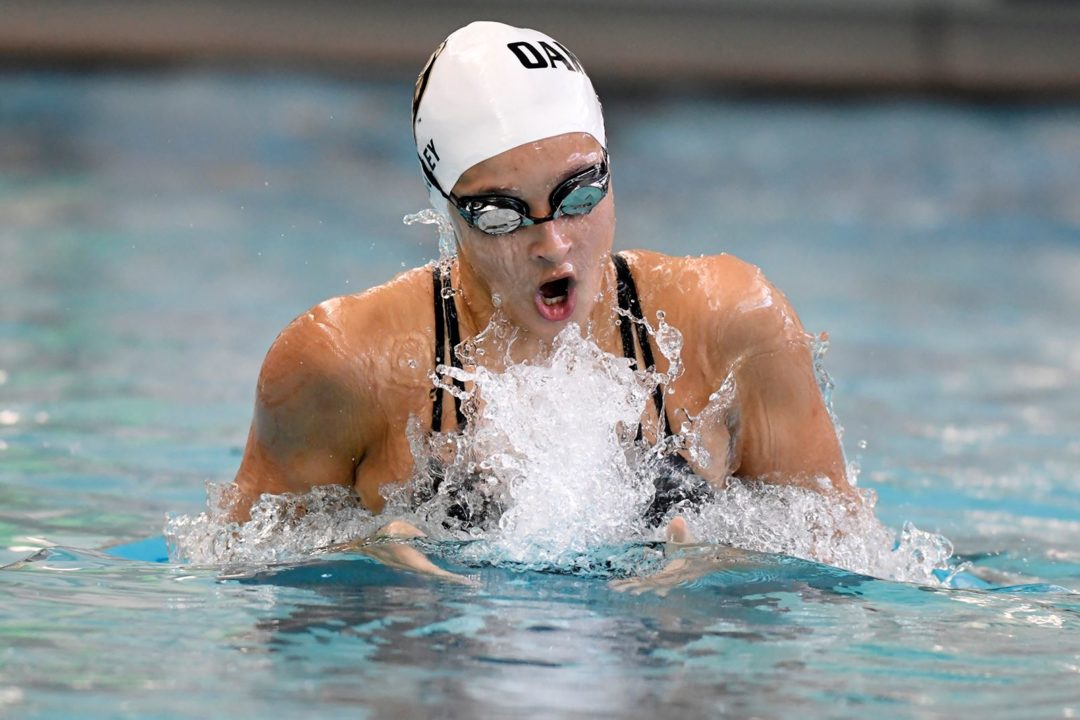 The Golden Grizzlies put themselves in position to lead the day 1 scoring by having 29 of 32 prelims swims qualify for finals. Stock photo via Jose Juarez

The first day of swimming at the 2021 Horizon League Championships saw 7-time defending men’s and women’s champions Oakland establish themselves as the early leaders. The Golden Grizzlies put themselves in position to lead the day 1 scoring by having 29 of 32 prelims swims qualify for finals.

In fact, every single Oakland women’s swimmer in prelims made it back to finals, where they ultimately scored points. There’s a slight asterisk on that stat, however, because Oakland freshman Sophia Davis swam the women’s 50 free exhibition, meaning she was unable to qualify for finals.

There was only one repeat champion out of Thursday’s 6 individual events. Oakland junior Susan LaGrand, who was Oakland and the Horizon League’s sole NCAA swimming qualifier, took the women’s 200 IM for the 2nd year in a row. LaGrand knocked over half off her previous lifetime best, tearing to a 1:57.61 to touch first by 5 seconds. The swim marked a new Horizon League Championship Record, coming in under LaGrand’s own previous record of 1:58.20. The event was also massive for Oakland as a team, as they also finished 2nd (Kiera Brough – 2:02.60), 3rd (Sydney McDowell – 2:02.64), 5th (Taylor Bailey – 2:03.74), and 7th (Mady Cislo – 2:06.86).

In the men’s 500 free, Oakland junior Ben Davis roared to a new personal best, taking the title in 4:22.61. The swim marked another 1-2 finish by the Golden Grizzlies, as sophomore Marko Khotynetskyi took 2nd in a personal best 4:23.21. Oakland also popped off a men’s win in the 50 free, where sophomore Christian Bart touched in 19.71. The swim marked a .20-second drop from his lifetime best, which he had swum at last year’s Championships. Bart is now just .15 seconds off the HL Championships Record in the event, with two more years to go.

Oakland’s other individual event win came in the women’s 500 free, where the sophomore duo of Emily Aycock and Sohvi Nenonen went 1-2. Nenonen, the defending champion in the event, locked into a very tight battle through the entire race with Aycock, who is the 200 free defending champion. Aycock pulled away on the final 50 of the race, splitting 28.07 to Nenonen’s 28.54, resulting in a win for Aycock (4:53.27), and a 2nd place finish for Nenonen (4:53.30).

Green Bay senior Anna Liu took the women’s 50 free, touching in 23.04, 0.17 seconds ahead of runner-up Poleena Kovalaske, a UIC freshman. Interestingly, Liu and Kovalaske had the exact same split on the 2nd 25 of the race – 11.90. Where Liu established herself as the champion was on the first 25 of the race, where she split 11.14.

Another Green Bay swimmer, Maxwell Boehnlein, took the men’s 200 IM. Boehnlein had a massive breaststroke leg of 29.96, significantly outsplitting the other swimmer in the field, and propelling him to a 1:47.85 finish. The event was a big one for Green Bay, as freshman Sebby Smolecki took 2nd in 1:48.27, marking a 1-2 finish.

Oakland swept the relays on day 1, repeating as champions in the women’s 200 free relay, 400 medley relay, and the men’s 400 medley relay. Ronja Riihinen, Mia Keranen, Sydney McDowell, and Sovhi Nenonen teamed up for a 1:33.00 to win the women’s 200 free relay. Importantly, McDowell is the only swimmer from this relay who won’t be returning next year, setting Oakland up for a high finish in the relay again next year.

Oakland clocked a 3:11.34 in the men’s 400 medley relay. Marko Khotynetskyi led off in 47.10, with Christian Bart splitting 53.20 in breast, Mack Flowers was 46.87 on fly, and Valance Washington posted a 44.17 anchor split. Christian Bart led the men’s 200 free relay off in 19.71, exactly matching his winning time from the individual 50 free later in the session. Javi Quinones, Valance Washington, and Ryan Geheb followed, resulting in a 1:19.82 final time.