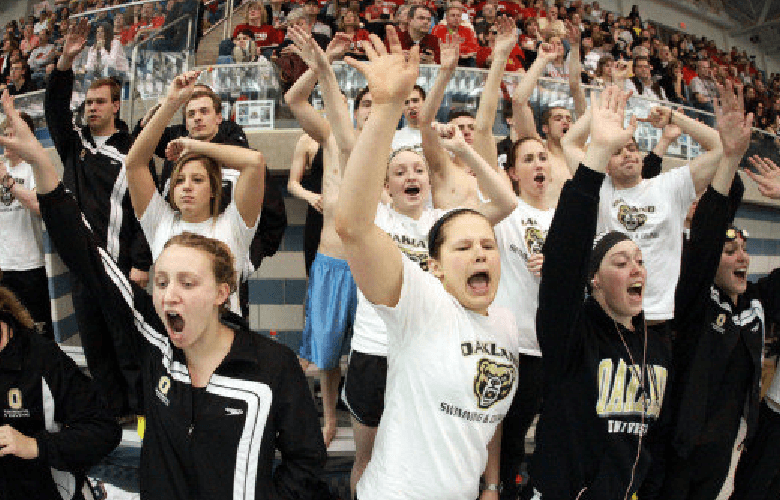 Oakland swimming and diving head coach Pete Hovland announced today the signing of Andrew Binder, Ayrton Kasemets, Janne Markkanen, John Schihl and Seth Timmons to National Letters of Intent during the early signing period. All five student-athletes are committed to enroll at Oakland University and join the swimming and diving team for the 2014-15 season.

It was a strong recruiting effort by Hovland and his coaching staff, who kept a highly-ranked local recruit close to home while earning commitments from top-ranked swimmers around the country. College swimming ranked John Schihl as the sixth-best recruit in the state of Michigan, while Ayrton Kasemets ranked eighth-best among recruits from Illinois. Seth Timmons ranked as the 33rd best recruit from Texas.

“We’re real excited about our five early signings,” said Hovland. “The staff and I think this is going to be a really strong class for us both academically and athletically, and it needs to be. We lose some really talented swimmers on the men’s side this year so it was a priority that we found some top level talent but also fill a need or two, and think we did that. Our breaststroke, backstroke and distance groups have all been upgraded and we anticipate they will be real strengths for us next year.”

Hovland on Andrew Binder: “Andrew’s signing was an important one for us since we graduate three of our top freestyle sprinters and therefore fills a need. We’ve been following his progress the past year and we’re real excited about his results over the course of the past 12 months. He’s got good size and he has an established coach that is moving him in the right direction and has him on track to swim even faster this year.”

Hovland on Ayrton Kasemets: “As a staff we are real excited about Ayrton’s signing. He’s an Honor Roll student each year, he’s a High School All-American in the pool and the CSCAA has him ranked as the eighth-best senior in Illinois. He’s got real good size and his progression over the last few years has been remarkable. His coaches think his ceiling is real high and that he’ll come in and have an immediate impact. His addition, along with John Schihl, will make our breaststroke group one of the strengths of our team going into next year.”

Hovland on Janne Markkanen: “Janne comes to us highly recommended by two of our current swimmers from Finland. His times in the 100/200 backstroke events would immediately challenge for league titles and he is also versatile enough to help us in the sprint and middle distance freestyle events as well as the in the 200 IM.”

Hovland on John Schihl: “We’ve known about John for a couple of years; his high school coach Mike Rado brought him to our attention and suggested we monitor his progress. On top of that, his dad played basketball here at Oakland and we felt there was certain level of comfort with OU right from the beginning. John is just coming into his own as one of the top breaststrokers in the state and we believe he has an even greater upside. With the power he already possesses, along with experience he is gaining swimming for his club coach Brad Brockway, we feel really feel good about John’s future with the Golden Grizzlies.”

Hovland on Seth Timmons: “Seth comes highly recommended to us by the staff at Nitro Swimming. The owner and a number of the coaches at Nitro have OU connections and have directed Seth our way. Seth’s academic success along with his swimming progression will fit in nicely here at OU. Seth brings with him times that would place top eight in all three distance disciplines at the Horizon League Championships. He will add depth to our distance group and will also help us fill the gap with the loss of our top distance swimmer and school record holder. With his keen interest in the field of Engineering, Seth fits the OU profile extremely well.”

This release was provided to SwimSwam courtesy of Oakland Swimming and Diving.