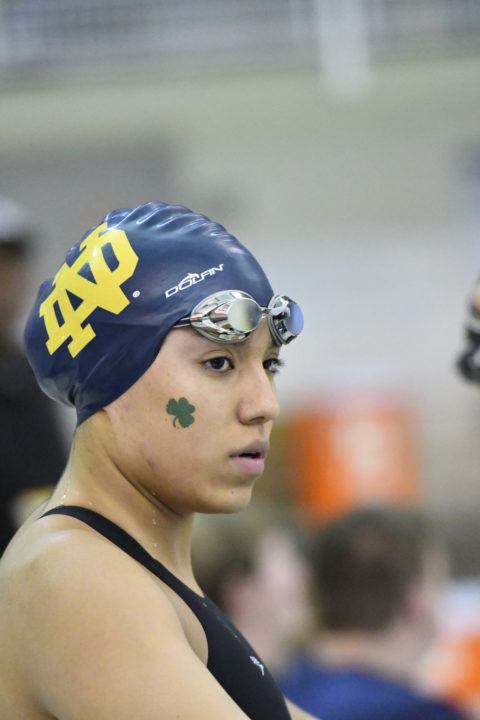 A critical component in the recent resurgence of the Notre Dame swimming and diving programs, April Woo has been promoted to associate... Current photo via Perry McIntyre

A critical component in the recent resurgence of the Notre Dame swimming and diving programs, April Woo has been promoted to associate head coach in a move announced on Friday by head coach Mike Litzinger.

“April is a tremendous coach who has truly come into her own at Notre Dame,” Litzinger said. “Her passion and attention to detail is geared to our team’s success, and is evident in the recent results of our speed group. Most importantly, April is dedicated to our process of building a Notre Dame program that is among the elite in the country. I am proud to have her as member of our coaching staff.”

Woo came to Notre Dame from Stanford, where she served as the volunteer assistant coach for the 2014-15 season. Woo helped coach on-deck while assisting with all aspects of the swimming & diving program. During her year with Stanford, the Cardinal placed third overall at the 2015 NCAA Championships, setting three American records in the 400 medley and free relays and the 100 free (Simone Manuel) in the process. Eight individuals earned All-America status while four others claimed honorable mention All-America citations. In addition, four relays claimed All-America accolades and one other secured honorable mention All-America honors.

Prior to coaching at Stanford, Woo was an assistant coach for Florida Gulf Coast from 2012-14. There she assisted with the team’s recruiting classes, which included the 12th-ranked recruiting class in 2013. She also designed weight-training programs for the distance swimmers. In her last season at FGCU, the Eagles placed 32nd at the 2014 NCAA Championships, which was the highest finish in program history. Three individual All-America citations highlighted the 2014 run. In her first year with the program (2012-13), the team claimed the Coastal Collegiate Swimming Association team title.

In 2013, Woo was awarded the prestigious Jean Freeman Award. This award is given to a male and female assistant coach in each NCAA division whose contributions have brought recognition to the respective colleges or university, and whose honesty, leadership and integrity reflects the characteristics of Jean Freeman.

Woo’s first stop out of college took her to Cleveland State, where she worked under the direction of legendary head coach Wally Morton while also completing a Masters of Education in exercise science in 2012. With the Vikings, Woo assisted in all aspects of the program including recruiting, training, weight plans and meets. Eleven individual school records fell under her watch in addition to nine relay marks.

A native of Honolulu, Hawaii, Woo swam collegiately at the University of the Pacific in Stockton, California from 2005-09 where she served as co-captain during her senior campaign (2008-09). Woo earned a Bachelor of Arts in psychology in 2009.

Outside of her assistant duties with various collegiate programs, Woo has assisted with several camps and clubs all over the country including the Neal Studd Swimming Camp, Ohio Masters, Swim Strongsville Club, Fast Lane Swimming Camp, LLC and the Pacific Swim School.