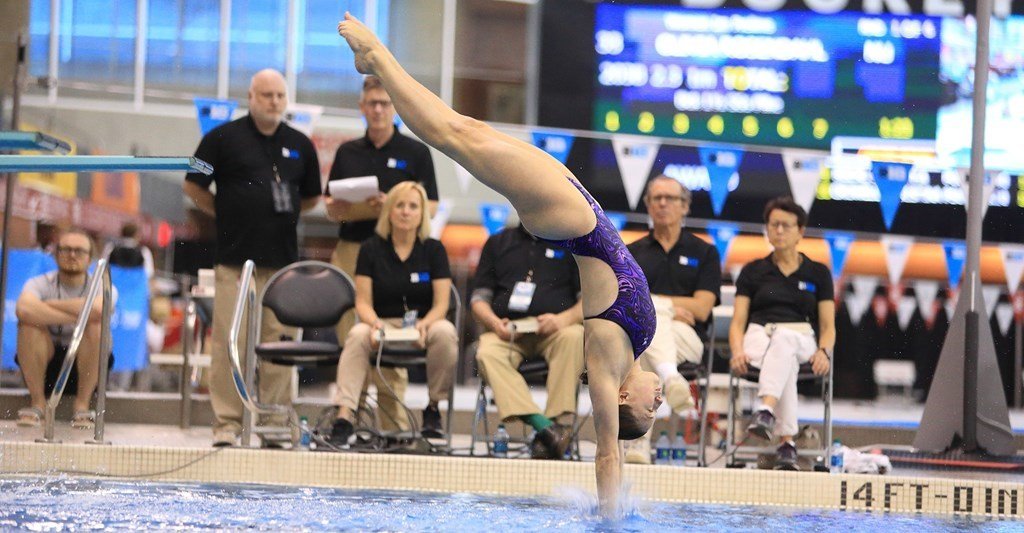 Anthony (Anton) Stephenson of the University of Nebraska and Olivia Rosendahl of Northwestern University have been chosen as this year’s Wayne Duke Award recipients. Current photo via Northwestern Athletics

INDIANAPOLIS – Anthony (Anton) Stephenson of the University of Nebraska and Olivia Rosendahl of Northwestern University have been chosen as this year’s Wayne Duke Award recipients. The award is an annual scholarship recognizing one male and one female Big Ten senior for achievements in academics, athletics, extracurricular activities and leadership.

“As we recognize these two student-athletes chosen for this scholarship, we also celebrate Wayne Duke’s contribution to the conference. We acknowledge not only these student’s ability to perform on their perspective field of play, but also their commitment in the classrooms and extracurriculars,” said Jerry Semler, Chair of Wayne Duke Award Selection Committee.

Stephenson, who was voted this year’s team captain of the men’s gymnastics team, has helped lead the team to back-to-back NCAA final six appearances. He has won three Big Ten titles, been named a two-time NCAA individual event All-American and is the U.S. reigning Vaulting Champion. Out of the gym, Stephenson majors in nutrition science with a minor in biochemistry. Currently, he holds a 3.97 grade point average and has plans to continue his education at the University of Nebraska College of Medicine where he will specialize in ophthalmology.

In addition to his achievements in the classroom and gym, Stephenson has spent time with numerous doctors over the last four years gaining skills that will be applicable as he continues his education. He currently is the president of the Student-Athlete Advisory Committee and continues to volunteer with many community service organizations.

Rosendahl, a member of the Northwestern women’s swimming and diving team, currently holds a 3.87 grade point average while double-majoring in international studies and French with a minor in political science. In the pool, she is a two-time NCAA Champion, a six-time United States National Campion, a two-time bronze medalist in the World University Games and a member of the United States Diving National Team.

Currently, Rosendahl plans on using the next year to train for the 2020 Tokyo Olympics. While she is training, she plans to apply to programs that would further her interest in international affairs. When she is not diving or studying she spends her time as her team’s captain, a member of the Alpha Phi Chapter of Zeta Tau Alpha and as a member of the Student-Athlete Advisory Committee.

Rosendahl and Stephenson will be recognized in Indianapolis during the Big Ten Women’s Basketball Tournament on Saturday, March 9.

In recognition of the Big Ten’s leadership in fully integrating athletics into the academic mission of its member institutions, the Indianapolis Big Ten Community Partnership initiated the Wayne Duke Postgraduate Award in 2008. Each Big Ten institution was asked to nominate one male and one female student for 2019, with a $10,000 scholarship awarded to each winner. Over the past 12 years the award has contributed nearly $170,000 in scholarships.

Of the 27 student-athletes nominated, 16 were Big Ten Distinguished Scholars having a grade point average of 3.5 or greater. The average grade point for all nominees was a 3.74, and 18 were recognized on their institutions’ Dean List. Out of the classroom, a total of 157 different volunteer activities were completed.

“Indiana Sports Corp is honored to play a role in awarding the Wayne Duke Scholarship,” said Indiana Sports Corp President Ryan Vaughn. “The honorees are a shining example of the importance of sports and academics and serve as a great example to the youth in our community.”

The Wayne Duke Postgraduate Award is named for the late Big Ten Conference commissioner who served from 1971 to 1989. While leading the Big Ten, Duke spent much of his time working to improve academic standards and graduation rates for students competing in conference athletics.

The award is made possible by donations from local corporations and individuals supporting intercollegiate athletics. The Indianapolis Big Ten Community Partnership is comprised of the State of Indiana, City of Indianapolis, Indiana Sports Corp, Pacers Sports & Entertainment and Visit Indy.