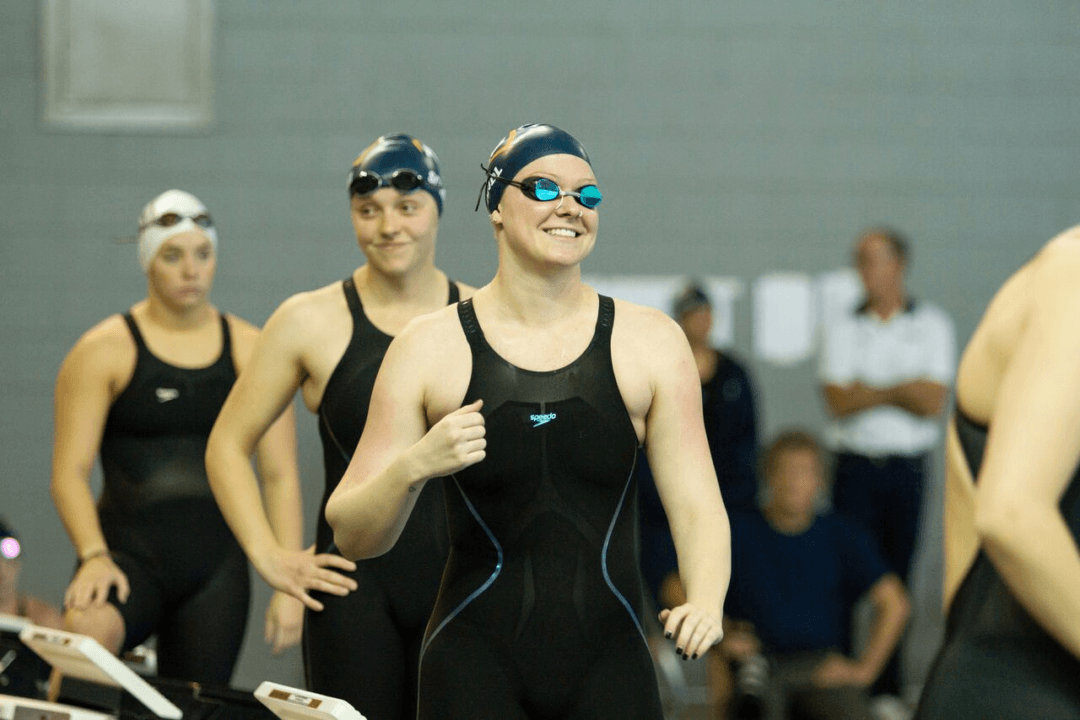 FLAGSTAFF, Ariz. – Day two of the Lumberjack Invite took place on Nov.17 in Flagstaff with both the swimming and diving team participating. Day two marked the final day of action for the swimming team as they finished off the two-day invitational in first place over New Mexico State and Arizona Christian University. On the boards, diving wrapped up the 1-meter dive for the invitation with five divers making the finals with Christina Torrente finishing as the highest placed Lumberjack in second.

In the first race of the invite, Katy Smith beat out fellow Lumberjack Monique King for first place in the 200 freestyle with a time of 1:51.72. King followed this up with a time of 1:52.59. The win by Smith marks her first individual event win in her Lumberjack career.

Northern Arizona’s next win came in the 200 butterfly where Andrea Schmidt took first. Schmidt has had great success in her senior season as the win marked her third of the season. Other Lumberjacks that had impressive results in this event were Maddie Seidl and Keeley Vardeman. Seidl finished second with a time of 2:06.11 while Vardeman finished the event with a time of 2:07.60.

In the 50 freestyle, the NAU record books were forever changed as Elisa Rodriguez set an NAU record-breaking time of 22.91. This time was a special moment for the ‘Jack as it has been a record that she has been aiming for since arriving in Flagstaff in the fall of 2017. The freshmen Clara Foster and Smith also had success in the 50 freestyle as they placed third and fourth with times of 24.21 and 24.24.

Another Aquatic Center record fell in the following event when Sarah Takach placed first in the 200 Individual Medley with a time of 2:06.95. This time broke the previous record held by fellow Lumberjack Niamh McDonagh from the 2017-2018 season.

NAU was able to cap off a record-breaking invite with a win in the final event of the day the 400 freestyle relay. The winning relay team for the ‘Jacks consisted of Erin Spielman, Rodriguez, King, and Smith. The group finished the race with a time of 3:25.77.

“From here it’s all about preparing and competing to get ready for the Western Athletic Conference Championship,” NAU swimming coach Andy Johns said.  “That is always the biggest goal of the year and hopefully after that getting some of the girls to National events after that.”

Diving Invite
The Lumberjack divers were back in action in the invite competing in the 1-meter event. The event started with 15 divers competing in the qualifying portion with the top 12 moving onto the finals. The Lumberjacks had five of their divers advance. With the finals ending for the 1-meter, the top NAU diver was Torrente who was in second place with a score of 551.80. Not far behind her was Jenny Cheetham who finished with a score of 515.70 and Emily Sharrer in sixth with a score of 475.90. The ‘Jacks were able to find more success in day two of the invite compared to day one because of the consistency in the final dives compared to the day before.

“I was very pleased with everyone’s performances today,” NAU swimming coach Nikki Huffman said.  “There could have been a couple of dives that were better, but that’s what we are here for, to get better and train to compete well.”‘

The final day of the Lumberjack Invite took place on Nov. 18 and unlike the previous two days, the third day of the invitational was only diving, with the divers participating in the platform.

The Diving Invite
The platform event was made up of 14 divers from Northern Arizona, Idaho, New Mexico State, and Arizona.  Each diver got the chance to perform five different dives. After the five dives, NAU’s highest finisher was Olivia Payne in fourth place with a score of 196.05.  This was Payne’s highest finish of the Lumberjack Invite.  The next Lumberjack in the standings was Christina Torrente in sixth place with a score of 191.10.  This finish wrapped up an impressive weekend for Torrente who placed third and second in the two previous diving events.  The four remaining ‘Jacks placed ninth through twelfth, with the order being Katie Conn, Alyssa Jones, Emily Sharrer, and Jenny Cheetham.

“All the divers had solid performances for the first platform performance of the season,” Huffman said. “Overall the weekend of diving was good, and we will continue to work hard to get better. I am proud of all the divers!”

Looking forward
Northern Arizona won’t be back in action until Dec. 20 when the team will head down to Florida to take on Florida Atlantic. Until then the Lumberjacks will take the next couple weeks to train.

“We have a lot to be proud of despite the loss.  Racing in flagstaff is not for the faint of heart and I thought we prepared and competed up her with a lot of grit,” said head coach Rick Pratt.  “We had some great swims and have much to look forward to moving forward.  Our relays were very strong and we had a several best times up here, which is very tough to do.  We’ve got to get a couple people back healthy, but over all we’re in a great place moving forward.”

Next, Hanna McGowan picked up another win for New Mexico State in the next race when she placed first in the 100 Breast at 1:02.17. Teammate Ashley Reynolds finished second with a time of 1:03.01 while Lauren Wood finished just off the podium in fourth at 1:04.04. Barbora Krizanova finished fifth with a time 1:04.68.

In the 200 Fly Nentwich (2:07.19) finished third while Katherine Harston touched fifth at 2:07.75. Then, in the 50 Free Neza Kocijan placed second with a time of 23.63 while Olivia Bender, Airam olive Aun and Laporte finished in a three-way tie for fifth place with times of 24.30.

NM State’s MacKinna Hauff, Raina Brommer and Sheridan Decker competed in the 1m event today after competing in the 3m yesterday. In the preliminary, Hauff rode a strong performance to a third-place position going into finals with a score of 268.50. Decker (214.80) and Brommer (213.60) were in 10th and 11th respectively after the preliminary round.

“The divers dove well this morning. They were a little tired from 3 meter yesterday, but MacKinna has two strong, consistent lists in prelims and finals,” said diving coach Miranda King. “Raina and Sheridan are working on the details of their dives which I am very happy about. If they can get those details consistent then they will be up in the top of the pack as well. A third place finish for MacKinna was fantastic, and Raina and Sheridan both moved up spots from where they finished prelims. Overall it was a great morning on 1 meter.  Tomorrow morning we will compete in our first platform event of the season and I am looking forward to a strong list from all three girls.

The New Mexico State diving team finished up its portion of the Lumberjack Invitational with the Platform event on Sunday, Nov. 18, in Flagstaff.  Divers participated in the 3m on Friday, Nov. 16, and the 1m on Saturday, Nov. 17.

“This was our first week training platform this season and our first platform competition. Overall the girls competed very well,” King said. “Sheridan was very consistent with her list and competed a dove for the first time. She held her own in this competition. Raina dove well despite hurting her neck earlier in the week. MacKinna has an awesome list but we are working on adding some more difficultly to her list. This was a great three day competition for us and I am extremely excited to see how the girls improve throughout the rest of the season. We have two more days of training here in Flagstaff before we head home for Thanksgiving and we will hopefully be learning a few new dives for this season.”

Sheridan Decker placed the highest of the three Aggies at third with a score of 197.50 and an average round score 39.50. Raina Brommer finished fifth with a score of 195.40 while MacKinna Hauff placed 14th at 148.70.

The NM State swimming and diving team is back in action when it travels to take on WAC-newcomer California Baptist in Riverside, Calif., on Friday, Dec. 14, and Saturday, Dec. 15.

Flagstaff, AZ – With their work on Friday and Saturday combined, Arizona Christian finished third of three at the Lumberjack Invitational hosted by Northern Arizona University.

“Always great to come up to NAU, we had a lot of great swims.  We have all of our athletes qualified for nationals.  At this point, it is time to train for March!”

Next On The Schedule

The Firestorm will swim again on December 7 when they are part of the Candy Cane Classic at the Phoenix Swim Club.