No Matter What Comes, Michigan’s Season is a Success 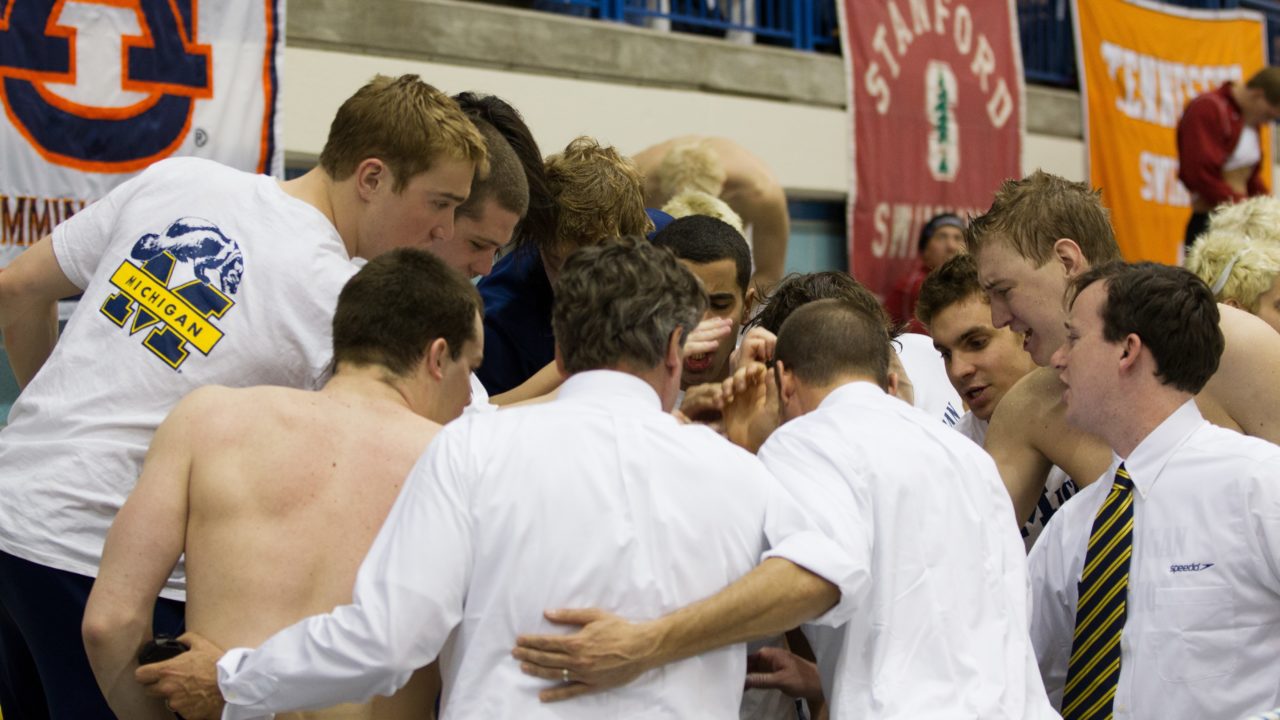 Chris DeSantis tells you why Mike Bottom and the Michigan Men have already proved their moving in the right direction. (Swim Pic Courtesy © Tim Binning, TheSwimPictures.com)

This past weekend, the University of Michigan hosted a “first chance” meet, another in the long line of ways they have tweaked swimming conventions in 2012-2013. The name was a play on the “last chance” meets which take place after conference meets, meets universally reviled but which no one really wants to get rid of. Instead, Michigan took another opportunity to do what they’ve done all year: swim fast. In doing so, they have raised expectations for their program to such a level that naysayers will use anything short of a Big 10 Championship and a National title against them.
First of all, I should clarify that I’m speaking about the Michigan Men here. The women swimmers were absent from the “first chance” results, which makes sense considering their conference meet starts on Wednesday. They are also short of one year into having Mike Bottom as their head coach, whereas the men are on year five. Anyway, let’s get back to why I consider Michigan’s season an unqualified success.
Early in their season, they hosted a “Water Carnival”. It was a different experience than your typical college dual meet, with music, oddball competitions and even some water polo. The goal of the meet was clear: draw more than your typical swim meet crowd together, show them something more entertaining than your typical meet, all while not detracting in anyway from the pursuit of seriously fast swimming. The meet was a success on all fronts. How do I know? Because I watched the coverage (as did the swimmers I coach) and felt really dumb for not having tried the same thing at some point.
For most of the rest of the season, Michigan was content to just keep swimming really fast. How fast? Fast enough that almost every Saturday they looked like the best team in the country. That effort culminated with this past weekend when they swam a 200 Medley Relay time that would have taken 3rd at last year’s NCAA meet.
At the helm of these unconventional results is an unconventional leader, Mike Bottom. Bottom has long since established his credentials, both as a great coach but also an innovator. Now, it may sound as if I am paying Bottom an unabashed compliment by labeling him “unconventional”, but I am not. While I admit there is a “rock star” level of worship that comes with being different at a high level, being unconventional alone is not something to be admired. After all, when you buck convention just for the sake of it, you could just as easily throw out things that are time-tested and great for something terrible and different.
Luckily for Michigan, Bottom seems to be disrupting the mainstream the right way. Add to all of the above the fact that Bottom plucked his associate men’s coach, Josh White, from a coaching job at Pomona-Pitzer. That job was not exactly the traditional resume for a top-level Division 1 coach, but Bottom did it anyway and White has to now be considered one of the best assistant coaches in college swimming.
Still, there will be some that will use Michigan’s lack of convention against them. A conventional team will likely have huge drops from their in season performances, with some as high as one second per 50 yards of racing. I don’t think that Michigan’s 200 Medley will find another four seconds to get down to 1:20 anytime soon, nor should they be ashamed if they don’t.
Winning a National Championship can seem like an eye blink from the outside. One day you aren’t #1 and then you are. This hides the process, the long grind that started long before. To me, Michigan’s season is a success because they’ve already taken a step closer. The next few weeks will reveal just how close they’ve gotten.

Bottom has always been willing to try new things and think outside of the box. There was a great video out years ago that was all of the Race Club guys busting out these dryland/swimming practices that looked fun and really hard. More coaches should be willing to take some risks and look to what he is doing in the pool!

Great post. It is a weird thing in collegeswimming where the status quo is to only swim fast 1-2 times per year. Most coaches I know get more upset and unmoored if they have a surprisingly sharp and fast in-season meet than they do if they have a meet where they swim like garbage. I have actually had to remind myself “Swimming fast is a good thing.”

Mike go for it and have some fun doing it.

the best thing bottom did was hire josh white. he is the reason they are where they are right now.