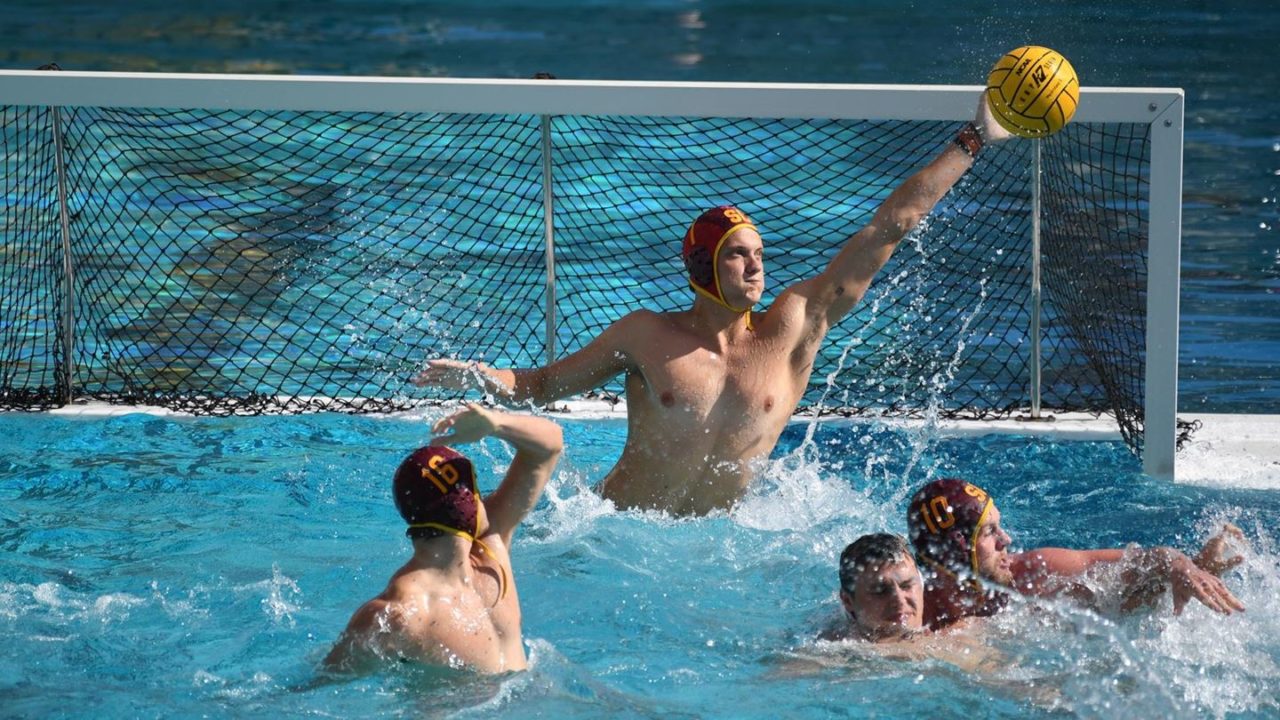 The USC men’s water polo team will fight for third place in the MPSF Tournament after top-seeded California earned an 11-8 decision over the Trojans. Archive photo via Katie Chin, USC Athletics

WESTWOOD, CALIF. — The USC men’s water polo team will fight for third place in the MPSF Tournament after top-seeded California got out in front of the No. 4 Trojans and held its ground for an 11-8 decision in today’s semifinals at Spieker Aquatics Center. USC’s Jacob Mercep scored a game-high four goals for the Trojans, and goalie Nic Porter hauled in 13 saves, but the Bears widespread scoring attack proved the difference in this one. Eight different Cal players scored in the win, which pushed USC to 5-8 overall on the year and into the third-place game tomorrow (March 7).
The Trojans got out of the gates in good form, capitalizing on an early power play converted by Chris Sturtevant and then sizzling in a 5-meter penalty shot earned by Wyatt Barker and blasted by Mercep. Cal answered back with a 6-on-5 finish, but Tom McGuire would get USC another penalty look. That one was topped off by Jake Ehrhardt to build back a two-goal advantage for the Trojans at 3-1. Thats where Cal generated a momentum shift. The Bears tallied four straight goals to close out the first and lead it 5-3. Barker closed the gap to one early in the second, but the Bears fired off the next two goals to go up 7-4. Mercep rocked one in to make it 7-5, but the Bears netted a buzzer-beater to craft a three-goal lead at the break, up 8-5 at halftime.
Try as they may, the Trojans could get no closer than an 8-6 margin made by Mercep early in the third. Cal had a goal at the ready for each USC strike, and the Bears held strong to close out an 11-8 victory over the Trojans. Porter had the final word of the game with his second 5-meter penalty save, but the Trojans were out of time and wound up with the loss.
USC will face either Stanford or UCLA in tomorrow’s third-place game at 11:30 a.m. at UCLA’s Sieker Aquatics Center.
MPSF TOURNAMENT
SEMIFINAL
[4] USC vs. [1] California
March 6, 2021 | Spieker Aquatics Center (Westwood, Calif.)
USC  3 – 2 – 1 – 2 = 8
CAL   5 – 3 – 1- 2 = 11
SCORING:
USC — Jacob Mercep 4, Chris Sturtevant, Jake Ehrhardt, Wyatt Barker, Chris Agliozzo.
CAL — Nikolaos Papanikolau 2, Alika Naone 2, George Avakian 2, Garrett Dunn, Nikos Delagrammatikas, Tommy Kennedy, Jack Deely, Mateus Stellet.
SAVES: Nic Porter (USC) 13, Adrian Weinberg (CAL) 7.