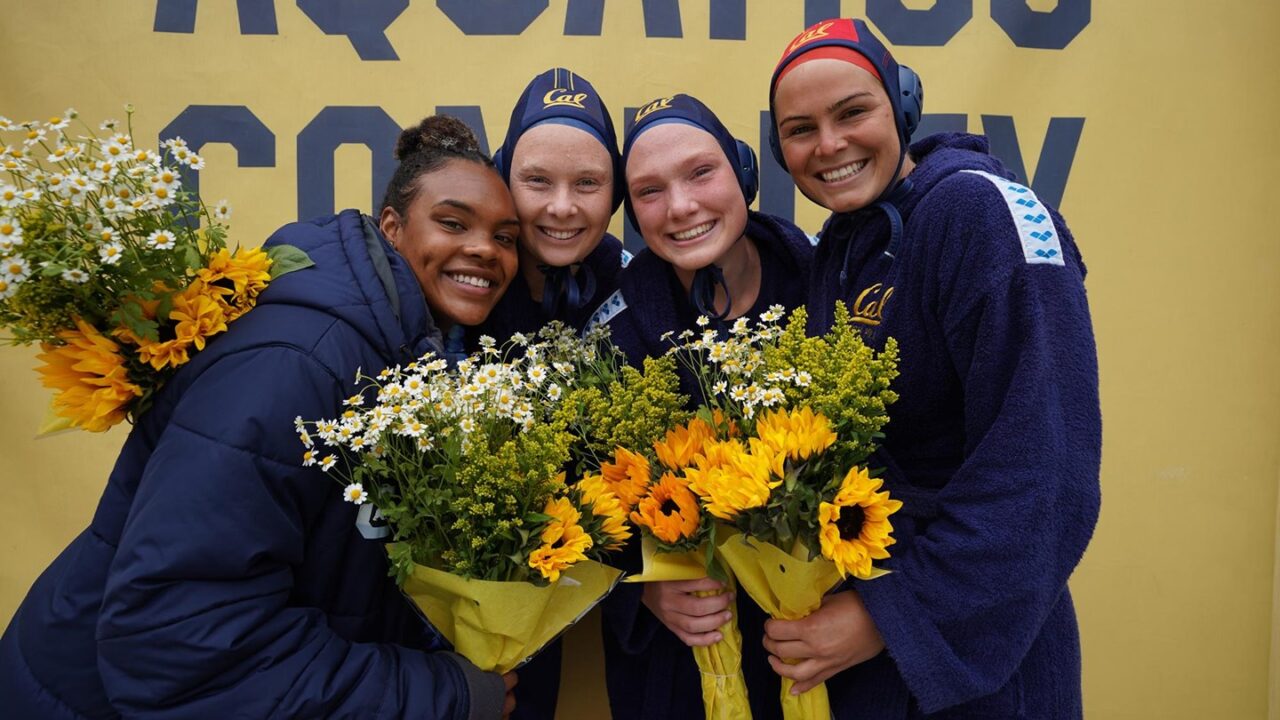 The Cal women broke the game open in the second quarter and breezed to a 13-3 victory over the Hoosiers on Senior Day at Spieker Aquatics Complex. Current photo via Catharyn Hayne/KLC fotos

BERKELEY – This time, there would be no letdown.

The seniors wouldn’t allow it.

A day after failing to deliver a knockout blow in a 12-10 victory over Indiana, the No. 4 Cal women’s water polo team broke the game open in the second quarter and breezed to a 13-3 victory over the No. 13 Hoosiers on Senior Day at Spieker Aquatics Complex.

“What we really wanted to focus on was consistency today,” said Cal senior Claire Sonne, who celebrated her final game in Berkeley with two goals and two assists. “I think we did that really well today and never took our foot off the gas pedal, especially defensively. I think it was really important for us to show who we are and just dominate.”

Junior Kitty Lynn Joustra scored four goals for the second consecutive day and the Bears (11-6, 6-6 MPSF) held Indiana scoreless for over three quarters to clinch the No. 4 seed in next week’s MPSF Tournament at Arizona State. Cal will meet fifth-seeded ASU on Friday at 2 p.m. in a game that could have major implications on each team’s NCAA Championships chances.

“I think we have a lot of momentum,” said Cal head coach Coralie Simmons, whose team has won six of its past eight games. “Going into the tournament, it’s anyone’s game.”

The Bears took a 6-1 lead over Indiana on Saturday but allowed the Hoosiers to cut the deficit to two goals on three separate occasions. Sunday, after the Hoosiers took a 2-1 lead with 6:28 remaining in the first quarter, they didn’t score again until the 3:58 mark of the fourth period. By that time, Cal had opened up an 11-2 lead.

Sonne and fellow seniors Brigit Mulder, Cassidy Ball and Georgia Gilmore were each honored during an emotional pregame ceremony. The Bears started slowly but got two of Joustra’s goals in the first quarter and it was tied at 2-2.

Freshman Maddie DeMattia put Cal in front with a backhander on the first possession of the second period and sophomore Shea Salvino followed with another score less than two minutes later.

The Bears led 6-2 at halftime and scored four more goals in the third quarter to blow the game open.

“It was definitely emotional,” Sonne said. “But for me it was a reminder of my gratitude for my teammates, my family and my huge support system that got me to this place. That was much more motivation to play a good game and just leave everything in the pool. I felt like we really did that as a group today.”

Ball made eight saves in her final game in Berkeley and Mulder had a goal, steal and field block. Ten different Bears scored.

“There was a lot on the line today,” Simmons said. “When you bring the senior game into the equation, it can get quite emotional. We wanted to respect that process and be there for them. The team really rallied around them and made today special.”